Australia and its many tyrants have come into their own over the past eighteen months. From not even letting their own citizens back into the country to arresting people for not fearing a face diaper outside their own home, Australia is serving as a fine example to the Biden regime on how to handle people who stubbornly wish to live free. More recently, Australia’s premier medical tyrant gave the world yet another stunning repository of wisdom.

According to Summit News, Dr. Kerry Chant, Health Czar of the Australian state of New South Wales (NSW), sought to add to her long list of sage advice to the people Down Under. In a recent press conference, Chant warned that due to the potential for new covid-19 variants, Australians should expect to be masking up the moment they step outside their homes potentially all the way through 2024. This is following one of her previous nuggets of enlightenment when she warned against starting up a conversation with a neighbor should you bump into them in a supermarket, even if both are masked up.

In what many would describe as Orwellian double-speak, New South Wales (NSW) state Premier Dominic Perrottet told reporters in Sydney that “I see it as a day of freedom, it’s a freedom day,” as unvaccinated residents in NSW are treated as second-class citizens by being barred from the basic amenities of modern urban life such as restaurants and gyms. As a reward for her unfailing commitment to ushering in a medical police state, Chant has been named NSW Premier’s Woman of The Year, giving the residents of NSW full confidence that her proposals will be based entirely on selfless and objective research and not out of narcissism.

Not to be outdone by a mere state government, the federal government has begun constructing quarantine camps that are not even slated for completion until next year in order to detain Australians who are returning from covid hotspots within the country. Many consider such actions to be eerily similar to certain Central European authoritarian regimes of the 1930s, but it might still be too early to confirm. 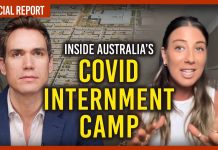