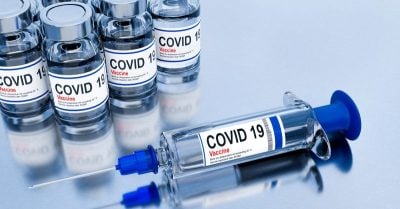 A group of 57 leading scientists, doctors and policy experts has released a report calling in to question the safety and efficacy of the current COVID-19 vaccines and are now calling for an immediate end to all vaccine programs. We urge you to read and share this damning report.

There are two certainties regarding the global distribution of Covid-19 vaccines. The first is that governments and the vast majority of the mainstream media are pushing with all their might to get these experimental drugs into as many people as possible. The second is that those who are willing to face the scorn that comes with asking serious questions about vaccines are critical players in our ongoing effort to spread the truth.

You can read an advanced copy of this manuscript in preprint below. It has been prepared by nearly five dozen highly respected doctors, scientists, and public policy experts from across the globe to be urgently sent to world leaders as well as all who are associated with the production and distribution of the various Covid-19 vaccines in circulation today.

There are still far too many unanswered questions regarding the Covid-19 vaccines’ safety, efficacy, and necessity. This study is a bombshell that should be heard by everyone, regardless of their views on vaccines. There aren’t nearly enough citizens who are asking questions. Most people simply follow the orders of world governments, as if they have earned our complete trust. They haven’t done so. This manuscript is a step forward in terms of accountability and the free flow of information on this crucial subject. Please take the time to read it and share it widely. 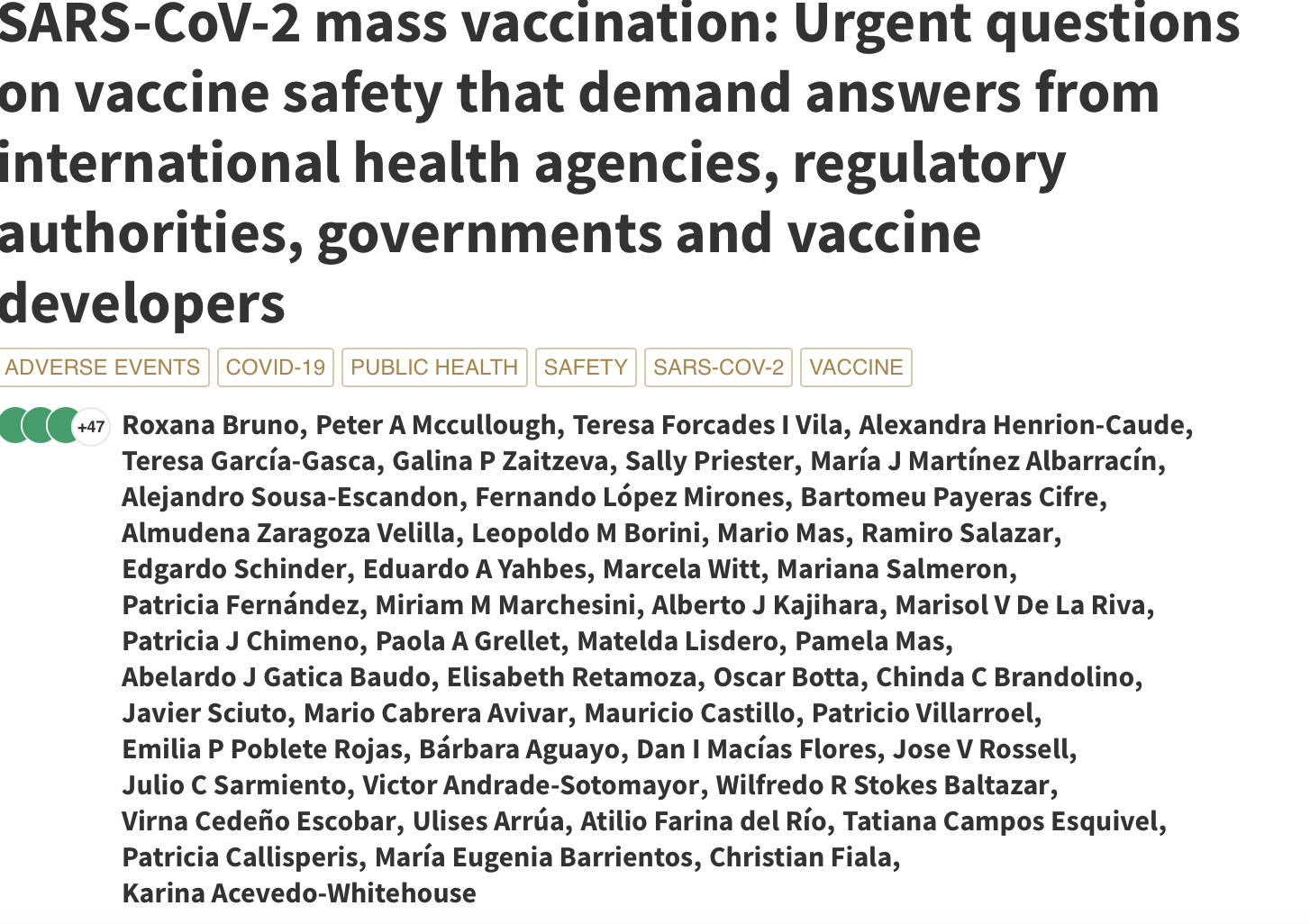 Since the start of the COVID-19 outbreak, the race for testing new platforms designed to confer immunity against SARS-CoV-2, has been rampant and unprecedented, leading to emergency authorization of various vaccines. Despite progress on early multidrug therapy for COVID-19 patients, the current mandate is to immunize the world population as quickly as possible. The lack of thorough testing in animals prior to clinical trials, and authorization based on safety data generated during trials that lasted less than 3.5 months, raise questions regarding the safety of these vaccines. The recently identified role of SARS-CoV-2 glycoprotein Spike for inducing endothelial damage characteristic of COVID-19, even in absence of infection, is extremely relevant given that most of the authorized vaccines induce the production of Spike glycoprotein in the recipients. Given the high rate of occurrence of adverse effects, and the wide range of types of adverse effects that have been reported to date, as well as the potential for vaccine-driven disease enhancement, Th2-immunopathology, autoimmunity, and immune evasion, there is a need for a better understanding of the benefits and risks of mass vaccination, particularly in the groups that were excluded in the clinical trials. Despite calls for caution, the risks of SARS-CoV-2 vaccination have been minimized or ignored by health organizations and government authorities. We appeal to the need for a pluralistic dialogue in the context of health policies, emphasizing critical questions that require urgent answers if we wish to avoid a global erosion of public confidence in science and public health.

Since COVID-19 was declared a pandemic in March 2020, over 150 million cases and 3 million deaths have been reported worldwide. Despite progress on early ambulatory, multidrug-therapy for high-risk patients, resulting in 85% reductions in COVID-19 hospitalization and death [1], the current paradigm for control is mass-vaccination. While we recognize the effort involved in development, production and emergency authorization of SARS-CoV-2 vaccines, we are concerned that risks have been minimized or ignored by health organizations and government authorities, despite calls for caution [2-8].

Vaccines for other coronaviruses have never been approved for humans, and data generated in the development of coronavirus vaccines designed to elicit neutralizing antibodies show that they may worsen COVID-19 disease via antibody-dependent enhancement (ADE) and Th2 immunopathology, regardless of the vaccine platform and delivery method [9-11]. Vaccine-driven disease enhancement in animals vaccinated against SARS-CoV and MERS-CoV is known to occur following viral challenge, and has been attributed to immune complexes and Fc-mediated viral capture by macrophages, which augment T-cell activation and inflammation [11-13].

In March 2020, vaccine immunologists and coronavirus experts assessed SARS-CoV-2 vaccine risks based on SARS-CoV-vaccine trials in animal models. The expert group concluded that ADE and immunopathology were a real concern, but stated that their risk was insufficient to delay clinical trials, although continued monitoring would be necessary [14]. While there is no clear evidence of the occurrence of ADE and vaccine-related immunopathology in volunteers immunized with SARS-CoV-2 vaccines [15], safety trials to date have not specifically addressed these serious adverse effects (SAE). Given that the follow-up of volunteers did not exceed 2-3.5 months after the second dose [16-19], it is unlikely such SAE would have been observed. Despite92 errors in reporting, it cannot be ignored that even accounting for the number of vaccines administered, according to the US Vaccine Adverse Effect Reporting System (VAERS), the number of deaths per million vaccine doses administered has increased more than 10-fold. We believe there is an urgent need for open scientific dialogue on vaccine safety in the context of large-scale immunization. In this paper, we describe some of the risks of mass vaccination in the context of phase 3 trial exclusion criteria and discuss the SAE reported in national and regional adverse effect registration systems. We highlight unanswered questions and draw attention to the need for a more cautious approach to mass vaccination.

With few exceptions, SARS-CoV-2 vaccine trials excluded the elderly [16-19], making it impossible to identify the occurrence of post-vaccination eosinophilia and enhanced inflammation in elderly people. Studies of SARS-CoV vaccines showed that immunized elderly mice were at particularly high risk of life-threatening Th2 immunopathology [9,20]. Despite this evidence and the extremely limited data on safety and efficacy of SARS-CoV-2 vaccines in the elderly, mass-vaccination campaigns have focused on this age group from the start. Most trials also excluded pregnant and lactating volunteers, as well as those with chronic and serious conditions such as tuberculosis, hepatitis C, autoimmunity, coagulopathies, cancer, and immune suppression [16-29], although these recipients are now being offered the vaccine under the premise of safety.

Another criterion for exclusion from nearly all trials was prior exposure to SARS-CoV-2. This is unfortunate as it denied the opportunity of obtaining extremely relevant information concerning post-vaccination ADE in people that already have anti-SARS-Cov-2 antibodies. To the best of our knowledge, ADE is not being monitored systematically for any age or medical condition group currently being administered the vaccine. Moreover, despite a substantial proportion of the population already having antibodies [21], tests to determine SARS-CoV-2-antibody status prior to administration of the vaccine are not conducted routinely.

Will serious adverse effects from the SARS-CoV-2 vaccines go unnoticed?

COVID-19 encompasses a wide clinical spectrum, ranging from very mild to severe pulmonary pathology and fatal multi-organ disease with inflammatory, cardiovascular, and blood coagulation dysregulation [22-24]. In this sense, cases of vaccine-related ADE or immunopathology would be clinically-indistinguishable from severe COVID-19 [25]. Furthermore, even in the absence of SARS-CoV-2 virus, Spike glycoprotein alone causes endothelial damage and hypertension in vitro and in vivo in Syrian hamsters by down-regulating angiotensin-converting enzyme 2 (ACE2) and impairing mitochondrial function [26]. Although these findings need to be confirmed in humans, the implications of this finding are staggering, as all vaccines authorized for emergency use are based on the delivery or induction of Spike glycoprotein synthesis. In the case of mRNA vaccines and adenovirus-vectorized vaccines, not a single study has examined the duration of Spike production in humans following vaccination. Under the cautionary principle, it is parsimonious to consider vaccine-induced Spike synthesis could cause clinical signs of severe COVID-19, and erroneously be counted as new cases of SARS-CoV-2 infections. If so, the true adverse effects of the current global vaccination strategy may never be recognized unless studies specifically examine this question. There is already non-causal evidence of temporary or sustained increases138 in COVID-19 deaths following vaccination in some countries (Fig. 1) and in light of Spike’s pathogenicity, these deaths must be studied in depth to determine whether they are related to vaccination.

Another critical issue to consider given the global scale of SARS-CoV-2 vaccination is autoimmunity. SARS-CoV-2 has numerous immunogenic proteins, and all but one of its immunogenic epitopes have similarities to human proteins [27]. These may act as a source of antigens, leading to autoimmunity [28]. While it is true that the same effects could be observed during natural infection with SARS-CoV-2, vaccination is intended for most of the world population, while it is estimated that only 10% of the world population has been infected by SARS-CoV-2, according to Dr. Michael Ryan, head of emergencies at the World Health Organization. We have been unable to find evidence that any of the currently authorized vaccines screened and excluded homologous immunogenic epitopes to avoid potential autoimmunity due to pathogenic priming.

WHO: No Guarantee COVID Vaccines Will Prevent People from Being Infected

Some adverse reactions, including blood-clotting disorders, have already been reported in healthy and young vaccinated people. These cases led to the suspension or cancellation of the use of adenoviral vectorized ChAdOx1-nCov-19 and Janssen vaccinesin some countries. It has now been proposed that vaccination with ChAdOx1-nCov-19 can result in immune thrombotic thrombocytopenia (VITT) mediated by platelet-activating antibodies against Platelet factor-4, which clinically mimics autoimmune heparin-induced thrombocytopenia [29]. Unfortunately, the risk was overlooked when authorizing these vaccines, although adenovirus-induced thrombocytopenia has been known for more than a decade, and has been a consistent event with adenoviral vectors [30]. The risk of VITT would presumably be higher in those already at risk of blood clots, including women who use oral contraceptives [31], making it imperative for clinicians to advise their patients accordingly.

At the population level, there could also be vaccine-related impacts. SARS-CoV-2 is a fast-evolving RNA virus that has so far produced more than 40,000 variants [32,33] some of which affect the antigenic domain of Spike glycoprotein [34,35]. Given the high mutation rates, vaccine-induced synthesis of high levels of anti-SARS-CoV-2-Spike antibodies could theoretically lead to suboptimal responses against subsequent infections by other variants in vaccinated individuals [36], a phenomenon known as “original antigenic sin” [37] or antigenic priming [38]. It is unknown to what extent mutations that affect SARS-CoV-2 antigenicity will become fixed during viral evolution [39], but vaccines could plausibly act as selective forces driving variants with higher infectivity or transmissibility. Considering the high similarity between known SARS-CoV-2 variants, this scenario is unlikely [32,34] but if future variants were to differ more in key epitopes, the global vaccination strategy might have helped shape an even more dangerous virus. This risk has recently been brought to the attention of the WHO as an open letter [40].