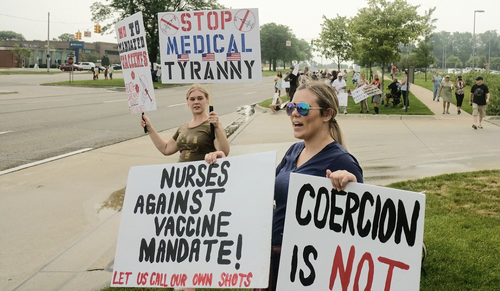 This might come as a surprise, but 40% of California state employees are unvaccinated despite Gov. Gavin Newsom’s directive to mandate the jab or be subjected to regular testing.

Newsom issued this new directive in July following a surge in COVID-19 cases, hospitalizations, and deaths. At the time, he said, “We are now dealing with a pandemic of the unvaccinated, and it’s going to take renewed efforts to protect Californians from the dangerous Delta variant.”

Still months later, less than two-thirds of state workers, or 62%, were vaccinated, according to The Sacramento Bee. The figure is much lower than the state’s overall rate of 72%.

Human Resources Department spokeswoman Camille Travis said her agency has only compiled 89% of state employee vaccination status. She said the data so far suggests some state employees weren’t compelled to get jabbed after Newsom’s directive.

Some of the state’s largest departments shared vaccination rates: 52% of California Highway Patrol employees, 60% of Department of Motor Vehicles employees, and 60% of prison employees have received the shots. California Department of Transportation has the highest with 70%.

Newsom’s mandatory jab, or be forced to regular testing for state employees, is less stringent than those of health care workers who have been forced to get the vaccine unless they had a medical exemption or religious claim. One emerging drawback of mandatory jabs, with no consideration for regular testing nor naturally-acquired immunity, are reports that a third of all hospitals in the state are experiencing critical staffing shortages because engineers, janitorial staff, respiratory therapists, nurses, midwives, physical therapists, and technicians have either staged strikes or have left the job over the mandate.

Director of Medical Ethics, Dr. Aaron Kheriaty of the University of California, Irvine, challenged the constitutionality of the hospital’s vaccine mandate regarding individuals who have recovered from COVID and have naturally acquired immunity and was immediately placed on leave. There’s no room to debate science as only the government can decide what’s best for state employees.

The same sort of stringent vaccination rules for healthcare workers could be coming to the Department of Corrections and Rehabilitation, the state’s largest department, with approximately 66,000 employees and a vaccination rate of 60%.

Perhaps of even more note is the fact no lesser liberal mouthpiece than The New York Times is finally willing to admit that it’s not just KKK-Hat-wearing ‘Trumpers’ that are the great unwashed deplorables refusing to get vaccinated.

In New York, for example, only 42 percent of African Americans of all ages (and 49 percent among adults) are fully vaccinated – the lowest rate among all demographic groups tracked by the city.

This is another area in which the dominant image of the white, QAnon-spouting, Tucker Carlson-watching conspiracist anti-vaxxer dying to own the libs is so damaging.

It can lead us to ignore the problem of racialized health inequities with deep historic roots but also ongoing repercussions, and prevent us from understanding that there are different kinds of vaccine hesitancy, which require different approaches.

Did you ever think you would read those ‘facts’ from that ‘news’ outlet?