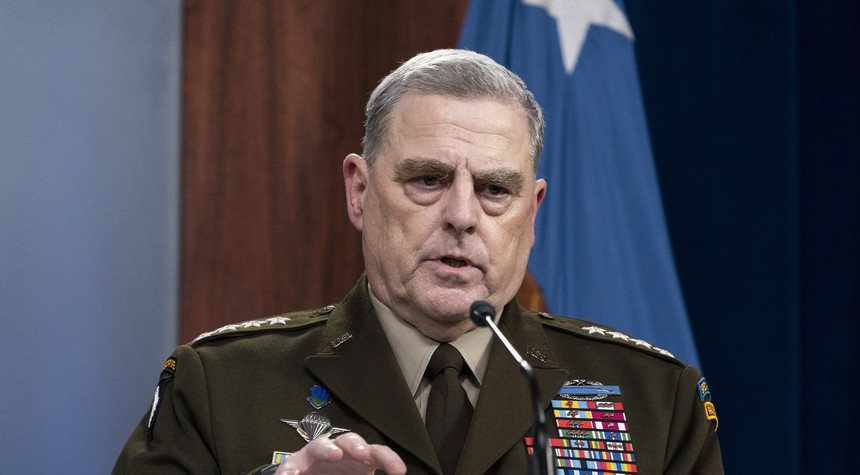 After the Afghanistan withdrawal fiasco, some said General Mark Milley should no longer be chairman of the Joint Chiefs of Staff, so Tuesday’s Washington Post blockbuster, excerpted from Robert Costa and Bob Woodward’s new book Peril, only adds fuel to that fire.

I was raised in politics, and then I was counsel on Gen. Flynn’s defense, so I feel like I know how shocking it can get. But this takes my breath away. Milley told Chinese leaders “he would not carry out ‘any kind’ of military action ordered by Trump.”https://t.co/pIhE016XBv

Costa and Woodward report, “Twice in the final months of the Trump administration, the country’s top military officer was so fearful that the president’s actions might spark a war with China that he moved urgently to avert armed conflict.”

In two secret phone calls, they report, Milley assured Gen. Li Zuocheng of the Chinese People’s Liberation Army that the United States would not attack Beijing. One call allegedly took place four days before the 2020 presidential election; the second was two days after the Jan. 6 Capitol siege.

Related: New Bob Woodward Book Promises to Be the Most Anti-Trump of Them All

“Milley went so far as to pledge he would alert his counterpart in the event of a U.S. attack, stressing the rapport they’d established through a backchannel. ‘General Li, you and I have known each other for now five years. If we’re going to attack, I’m going to call you ahead of time. It’s not going to be a surprise,’” the book says. Milley did not relay the conversation to then-President Donald Trump.

In early January, the general also called on the admiral overseeing the U.S. Indo-Pacific Command to  postpone military exercises, to which the admiral complied.

Whether or not this violates the infamous Logan Act, there is no circumstance when a military officer should conduct his own covert foreign policy without informing civilian leadership.