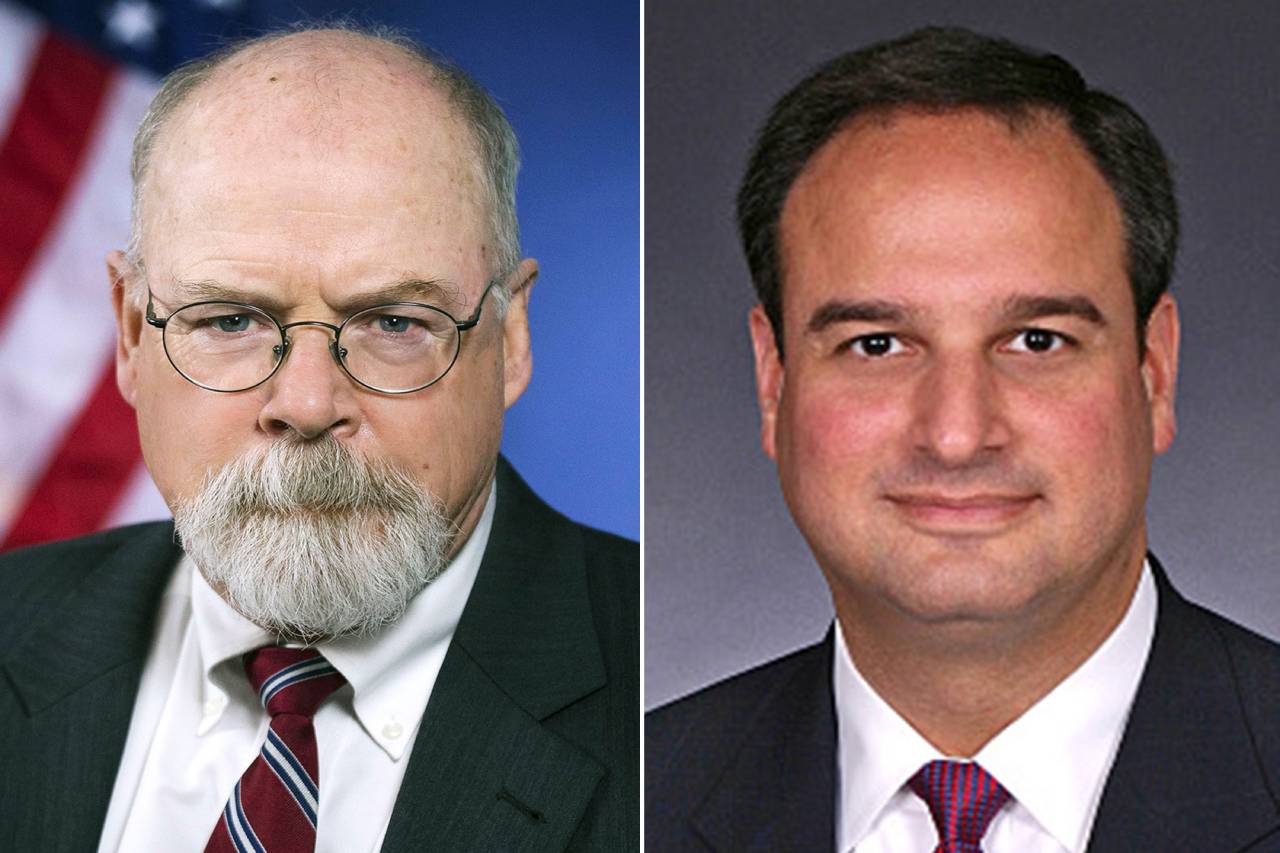 Special Prosecutor John Durham’s second indictment, filed on the eve of the statute of limitations expiring for the crime charged, casts a whole lot of sunlight on Russiagate and the people who concocted it. Turns out—not to our surprise—that these are the very same people up to their ears in “electing” the current senile occupant of White House and his supporting cast of incompetent “experts.”

As reported in the national news media, Durham indicted Michael Sussmann, a partner at the very political Perkins Coie law firm, for making false statements to the FBI. Marc Elias and his team at Perkins Coie ran the Democrats’ subversion of extant election law concerning mail-in ballots and other fraud measures in the 2020 presidential election. Sussmann and Elias both have left Perkins Coie in recent weeks. Sussmann entered a plea of “not guilty” in his first appearance in the U.S. District Court for the District of Columbia.

The specific false statement is Sussmann’s claim to FBI General Counsel James Baker that he was acting on his own and not on behalf of any client when he floated a story to the FBI about alleged contacts between Alfa Bank, a major Russian bank with alleged close ties to Russian President Vladimir Putin, and the Trump organization. Sussmann met with Baker on September 19, 2016. He repeated the same lie to the CIA in late 2016/early 2017 when he was trying to promote further investigation by that agency and prolong the defamatory media campaign against Donald Trump.

Testifying before the House Select Committee on Intelligence in December 2017, however, Sussmann admitted that he was acting at the direction of a client when he approached the FBI and CIA, but he asserted attorney-client privilege as to the name of that client.

The Alfa Bank/Trump fabrication was used by the Clinton campaign on the eve of the 2016 presidential election to push the information warfare legend that Donald Trump was a Manchurian candidate, a pawn of Vladimir Putin. The news “hook” which allowed initial publication in Slate by Franklin Foer on October 29, 2016, was the FBI investigation Sussmann generated. On the same day as the Slate story, Hillary Clinton herself posted a tweet in which she claimed: “Computer scientists have apparently uncovered a covert server linking the Trump organization to a Russian-based bank.”

As noted by investigative reporter Glenn Greenwald, “appended to [Hillary’s] tweet was a statement from her campaign’s national security advisor, Jake Sullivan—now President Biden’s National Security Advisor—insisting that ‘this could be the most direct link yet between Donald Trump and Moscow,’ adding: ‘Computer scientists have apparently uncovered a covert server linking the Trump organization and a Russian bank.’ A second tweet from Hillary the same day just flatly asserted: ‘Donald Trump has a secret server’ that ‘was set up to communicate privately with a Putin-tied Russian bank called Alfa bank.’”

Prior to the FBI opening an investigation, Sussmann and the Clinton campaign had failed to gain major media traction on this fabrication despite spreading it far and wide. https://theintercept.com/2016/11/01/heres-the-problem-with-the-story-connecting-russia-to-donald-trumps-email-server/

Many have grown very cynical about all of this—and rightfully so. Not only is Durham very late to this party, but how could it be that the FBI could be duped about Sussmann’s statement, particularly since by September 2016, when the Baker meeting occurred, it was well known that Perkins Coie represented the Clinton campaign and the DNC?

In fact, the indictment itself states that Baker knew that Perkins Coie represented “the Clinton Foundation, the DNC, etc.” Analysis focused on the simple lie misconstrues the scope of the deception Durham is charging in the 27-page indictment.

Sussmann told Baker that he had been serendipitously approached by multiple independent and prominent cyber experts, actual scientists, including some of Republican voting registration, about the Alfa Bank/Trump organization connections. He provided Baker with the names of three of these “independent” researchers. Others were described as independent academics or corporate “POCs” (points of contact). According to subsequent media accounts, shopped to the media by Sussmann and Fusion GPS (the discredited “investigative firm” at the center of the Russiagate hoax), these independent and civic-minded “nerds” had stumbled on the Alfa Bank/Trump organization server while doing research about possible Russian interference in the 2016 election, including the possibility that the Russians hacked the Trump campaign or organization.

Sussmann told Baker that multiple media outlets were already in possession of information about the Trump organization’s secret server and that the New York Times would be publishing a story about it in four days. He provided Baker with thumb drives, data files, and white papers containing no dates or author’s names.

In fact, the indictment documents that Sussmann went to the FBI on behalf of two clients, the Clinton campaign/DNC and an individual identified as “Tech Executive No. 1” (a/k/a “Max”). Tech Executive No. 1 was also a client of Sussmann and Perkins Coie and the company with which he was associated provided substantial cash business to the firm. Perkins Coie billings describe the Alfa Bank/Trump organization fake narrative as a “confidential project” coordinated between Sussmann, Elias, Tech Executive No. 1, Fusion GPS, and numerous journalists.

During the election period the Perkins Coie billings for this “confidential project” are all to the Clinton campaign. Following the campaign, Sussmann billed the “confidential project” to Tech Executive No. 1. In sworn testimony in London, Christopher Steele, the British spy and author of the dirty Trump Russiagate dossier, said he circulated the Alfa Bank story based on a narrative provided to him personally by Michael Sussmann.

The indictment documents how Tech Executive No. 1, working with Michael Sussmann, used his wide access to public and non-public internet data to concoct fake narratives regarding Trump and Russia. These efforts included tasking employees for this purpose at two cybersecurity companies he owned which had classified contracts with the U.S. government. He also tasked researchers at a university then finalizing a contract to conduct cybersecurity for an agency of the U.S. government. As part of the proof of principle for the contract, he had provided the university researchers with huge amounts of both public and non-public internet data, to scan for derogatory information which could be used against Trump.

According to the indictment, Tech Executive No. 1 stated in emails that he had been offered the top cybersecurity post in the new administration if Hillary Clinton was elected.

As opposed to the entirely false claim Sussmann made to Baker, that he was a boy scout approached by non-partisan independent researchers with the Alfa Bank/Trump information, all the materials presented to the FBI were authored either by Sussmann or Tech Executive No. 1 and his tasked researchers. Further underscoring the duplicity, the researchers themselves had flagged the story as false before it was presented by Sussmann to the FBI. The FBI, after a wild goose chase, also concluded it was false, largely on the same grounds which the independent researchers found it to be false.

Consensus internet speculation as to the identity of Tech Executive No. 1 focuses on Rodney Joffe of Neustar, a Perkins Coie client. Joffe describes himself as a “John McCain republican” and is a recognized pioneer in cybersecurity with deep connections to Silicon Valley, academia, and intelligence agencies in the U.S., London, and elsewhere. https://www.home.neustar/blog/rodney-joffe-named-2020-cybersecurity-professional-of-year This is, of course, only informed speculation.

Following the election, the same Alfa Bank/Trump fake story, with new supplements, was picked up and promoted by Daniel Jones, a former FBI agent and counsel to the Senate Intelligence Committee, and his dark-money cutouts Advance Democracy Inc. and The Democracy Integrity Project. Jones worked with John Podesta to collect millions from Silicon Valley billionaires and George Soros to continue the fraudulent Russiagate information warfare campaign against Trump after the election. Most of the early money went to Christopher Steele, Fusion GPS, and New Knowledge, the Austin-based internet company that got caught running false flag Russian smear operations against Roy Moore in the 2017 Alabama Senate election.

The indictment carries no reference to Sussmann’s role in the other major Russiagate myth peddled before the election: that Russians hacked the DNC and then provided their bounty to WikiLeaks to damage the Clinton campaign. The WikiLeaks releases showed the DNC rigging the Democratic primaries against Bernie Sanders, rigging the presidential debates, and Hillary Clinton groveling before Wall Street and being paid big bucks to do so.

The WikiLeaks/DNC hack story also proved to be completely fake. Sussmann hired CrowdStrike to investigate the DNC “intrusion” and otherwise coordinated with the FBI concerning its investigation of the DNC “hack.” Subsequent testimony by Shawn Henry of CrowdStrike before the House Select Committee on Intelligence in December 2017, showed that no information from the DNC servers was ever exfiltrated across the internet by the alleged Russian hackers to WikiLeaks.

The indictment also does not detail what other fake narratives against Trump were produced by Sussmann, Tech Executive No. 1, and their band of “independent researchers” scanning presumably classified and other non-public databases.

The Sussmann exploitation of the FBI to create a news hook for a major defamatory campaign parallels the way the sensational and fake Christopher Steele Russiagate dossier was surfaced and published by BuzzFeed prior to Donald Trump’s inauguration. Entirely paid for by Hillary Clinton and shopped by Sussmann, Elias, Fusion GPS, and elements of British intelligence, the British spy’s dossier famously and falsely claimed to the world that Donald Trump had been compromised by Putin’s taping of alleged Trump sex escapades with prostitutes in Moscow.