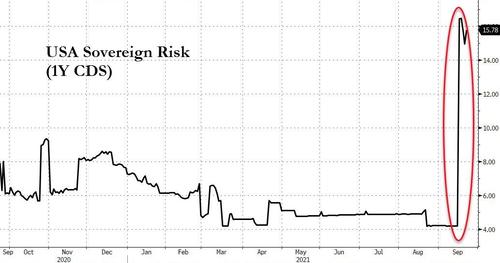 With Democrats in Washington pushing for a $3.5 trillion ‘social infrastructure’ stimulus package and Speaker Pelosi perhaps hinting at the removal of the debt ceiling altogether for the US, it is perhaps no surprise that some are ‘worried’ that the idea of consequences is absent from any discussions.

Pelosi called the debt ceiling vote a “tradition,” adding that there is some back and forth about whether they need to do it, before she dropped this bombshell: “There’s some doubt as to whether that should be the case.”

While US’s sovereign risk has been considerably higher than this before (like in 2013 during that debt ceiling debacle), the velocity of the move suggests more than a few investors are considering the chance of a US default.

…and the Fed’s balance sheet having gone vertical…

With Central Bankers constantly reassuring that there is nothing to fear here – some even pointing to Japan as proof that this can go on much longer before the pin is pulled from the global reserve currency’s grenade – it appears that, back in the real-world, real-life human beings investing their own hard-earned money are much more worried about Washington’s largesse.

Specifically, clients of UBS Group AG are wondering whether central banks’ massive stimulus could trigger hyperinflation, according to a list of their top economic concerns…

As Bloomberg notes, the concerns highlight the conundrum facing central banks as they continue to provide ultra-accommodative policy to help economies recover from the crisis.

Commodity prices have spiked and other inputs are facing severe supply constraints, driving up inflation rates from Europe to the U.S.

And remember “nothing lasts forever” in fiat make-believed-land…

With the world now seemingly convinced The Fed is on its way to normalization (tapering into mid-2022, then rate-liftoff by end-2022) and a Democrat-run socialist utopia lies aheadwhere the rich pay “their fair share” of taxes and the citizenry gets to sit at home being “artistic” and “creative” thanks to our UBI (as long as we comply with vaccine mandates); some more pragmatic market-watchers – like the UBS clients – see a path that is a little less optimistic (think Mad Max).

Peter Schiff warned that even if the Fed does begin to taper, it will eventually reverse course and ultimately expand QE.

“It knows the only foundation this bubble economy has is the Fed’s easy money policies. And I don’t think they have any actual plans to taper. And even if they just kind of feign the process by beginning it, they’ll never complete it because soon after they start the taper, again, if they even ever start, they’re going to have to reverse the process. Because ultimately, the Fed Fed is going to expand the QE program and start to buy a lot more government Treasuries and mortgage-backed securities in the future than it’s doing right now.”

At some point, the markets are going to figure this out, understand the Fed’s predicament, and then it’s going to hit the fan.”

Perhaps that is why gold and crypto has soared so much…

Remember the strength/weakness of the ‘dollar’ only exists relative to other fiat frauds – to truly comprehend its ‘weakness’ one needs to compare to ‘stores of wealth’.