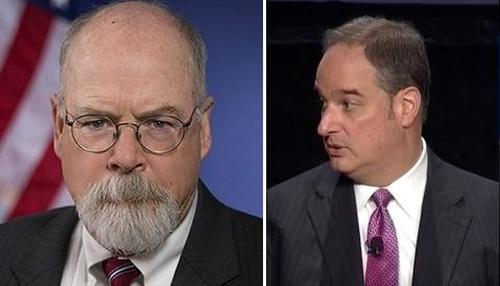 Update (1645ET): A grand jury has indicted Michael Sussmann, the lawyer accused of making false statements during the 2016 presidential campaign to slander then-candidate Donald Trump in the final months of the election.

Sussmann, the indictment charges, “lied about the capacity in which he was providing … allegations to the FBI” of potential cyber links between a Russian bank and a company owned by former president Donald Trump.

Durham is pursuing a prosecutorial theory that Sussmann was secretly representing Hillary Clinton’s presidential campaign, which was a client of Sussmann’s firm, these people said. –Washington Post

Notably, this is far from over as Special Counsel Durham;s office pointed out in the statement that the investigation is “ongoing.”

Highlights from the Washington Free Beacon’s Chuck Ross (and others):

The FBI opened an investigation of Alfa Bank based on the info that Michael Sussmann gave to James Baker, even though Sussmann knew the info was bogus. As Durham notes, the FBI wasted its time and resources chasing that false lead pic.twitter.com/r5zcURtwKO

This is huge. A tech exec who Sussmann represented discussed faking a link between the Trump Org and Alfa Bank. The exec and other researchers also doubted that there were nefarious contacts involving Trump Org, but Sussmann would later claim to FBI and media that there were pic.twitter.com/XP3mJubOog

New and interesting information in the Sussmann indictment. His tech executive client allegedly accessed non-public info about Trump, and they coordinated all of this with agents of the Clinton campaign. Are the walls closing in? pic.twitter.com/kZMsf6MYfE