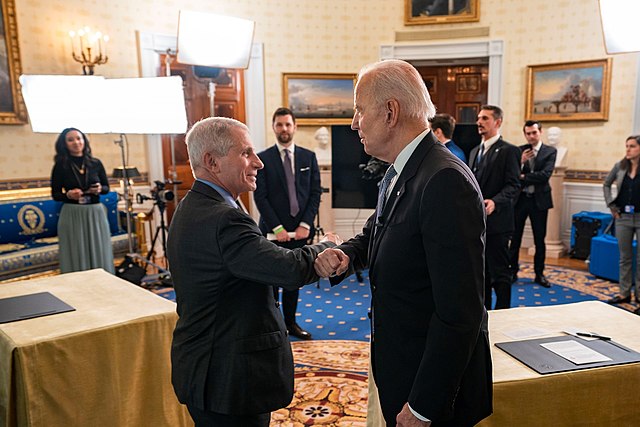 White House chief medical adviser Antony Fauci said over the weekend that the Biden regime is going to “mandate” everyone including children take Big Pharma’s experimental shots if they’re not “persuaded” to take them and called for banning Americans from flying, going to work, college and school if they refuse to submit.

The move comes just days after Fauci said Americans will need to take a third booster shot to be considered “fully vaccinated.”

“We have a pretty hardcore group of people that we’re trying to persuade them — or mandate them if they’re not persuaded — to get vaccinated,” Fauci told the Association of LGBTQ Journalists on Sunday.

Fauci went on to claim that vaccinating this “recalcitrant group” would be “the key to ending this [pandemic]” before immediately walking back his sweeping claim and saying it would only “cut down” the overall number of infections.

“So we have about 75 million people who are eligible to be vaccinated who have not yet gotten vaccinated, that’s the key to ending this,” Fauci said. “I mean that would be the key, um, you would cut down dramatically the number of infections if we got the overwhelming majority of that recalcitrant group vaccinated.”

Fauci also said over the weekend that unvaxxed Americans should be banned from flying and children should be forced to take the shot to go to school (even though studies show boys are more at risk from the shot than the virus itself).

NEW – Dr. Fauci calls for unvaccinated Americans to be banned from air travel and to mandate #COVID19 vaccines for school children.pic.twitter.com/AyYL0F8xkM

Fauci claimed that if we got 70% of Americans vaccinated we’d achieve “herd immunity” but ultra-vaxxed Israel where over 84% of adults are vaccinated reported the highest number of cases per capita in the world just two weeks ago and their government is rolling out booster shots already and telling everyone to prepare for a fourth shot in the near future.

Ireland, where nearly 90% of the adult population is vaxxed, reported Friday that 54% of patients in their hospitals with covid were fully vaccinated.

Fauci on Friday said he would personally order everyone to take Big Pharma’s experimental injections in order to have a job.