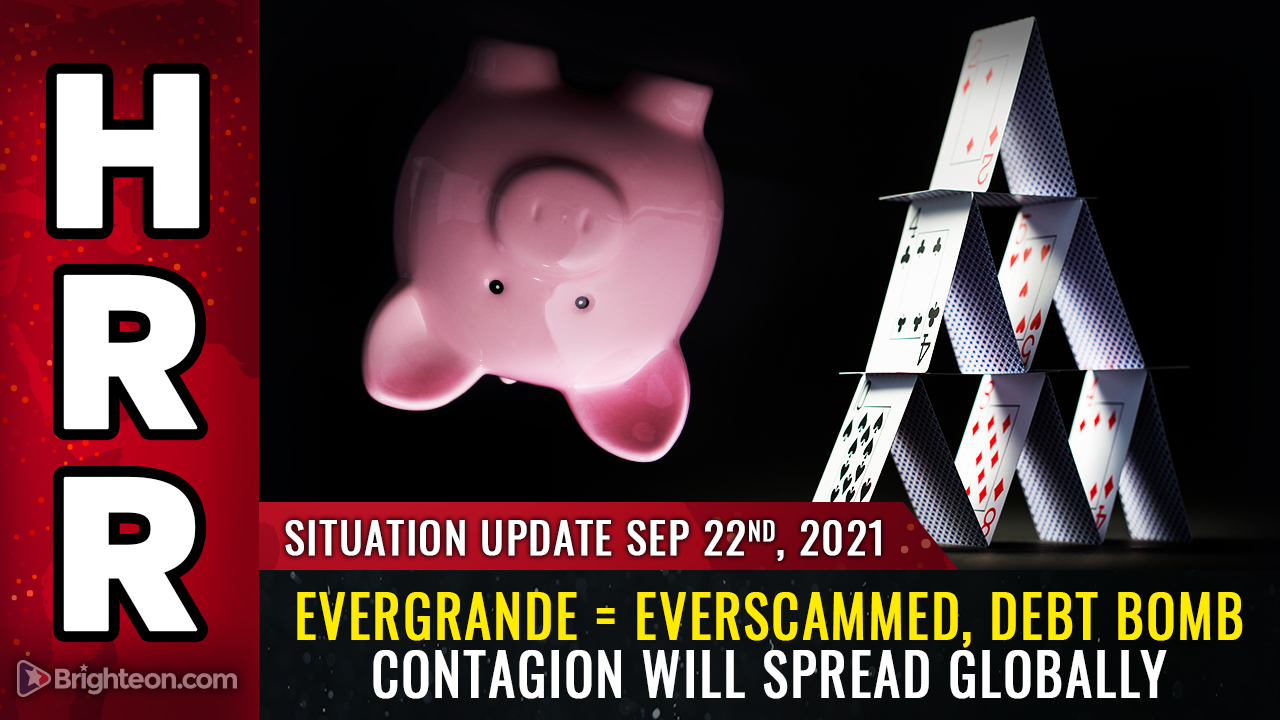 The Evergrande (“EverSCAMMED”) fiasco is nothing more than a classic Bernie Madoff Ponzi scheme involving property developers and greed-driven investors who chased high returns while forgetting about the existence of risk. (Every generation, it seems, must learn this painful lesson the hard way…)

Like all successful Ponzi schemes, Evergrande’s rise to become a global Fortune 500 business hinged on it finding a steady supply of new suckers to hand over their money as “investments” in the Evergrande scheme.

Buoyed by a flood of incoming investment money, Evergrande churned out entire “ghost cities” of apartment buildings across China, selling the ludicrous idea that these apartments would serve as retirement assets for the millions of Chinese citizens who “invested” in their construction. As long as the buildings kept going up — and the bond payments were made on time — everybody convinced themselves they were getting rich.

Because it’s the same Madoff scandal, all over again, but at a significantly larger scale. The Evergrande Ponzi scheme involves at least $300 billion dollars in direct debt, rippling into potentially trillions of dollars in total exposure around the world (among banks and institutional investors) due to leveraged investment instruments and the ripple effect of non-payment (i.e. default).

Ponzi schemes collapse when people demand to get paid back for their “investments” but the schemers can’t ensnare enough new investors to fund the previous ones who want out. As Bloomberg reports (see chart below), Evergrande owes $669 million in interest debt payments over the next 3 months.

According to recent news out of China, it looks like the government there is going to help cover Evergrande’s debt payments to local bond holders (i.e. institutions in China) while stiffing foreign bond holders.

This is a surefire recipe for causing the financial default to spread internationally: 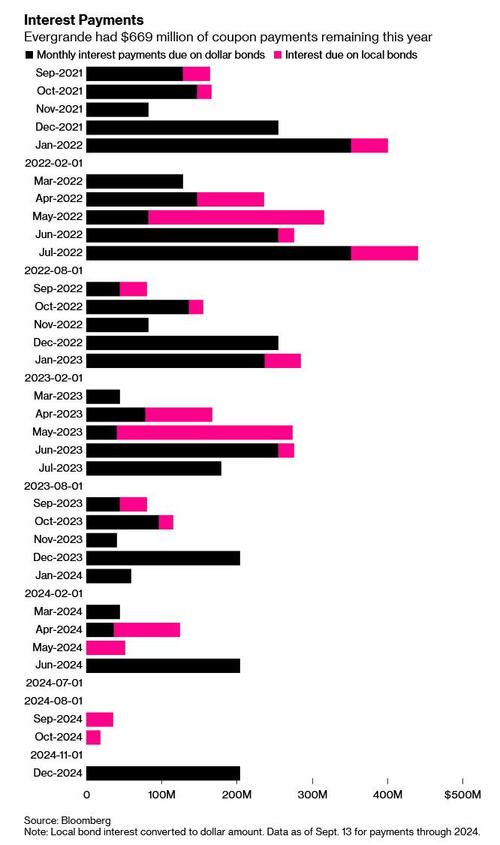 One look at the debt obligations chart above should lead to the instant realization that Evergrande is going to default… and foreign debt holders are going to be left high and dry. Even if the Chinese government covers all the individual local investors and their WMPs (Wealth Management Product investments), it’s clear that hundreds of billions of dollars in foreign-held debt is going to be written off at some point (probably soon).

Even worse, Evergrande is just the tip of the iceberg.

“The whole Chinese property market is on stilts,” investment expert Jim Chanos told the Financial Times. “…[A]ll the developers look like this. There’s lots of Evergrandes out there in China — Evergrande just happens to be one of the biggest.”

That means U.S. banks and institutions that invested in Evergrande are going to suffer catastrophic losses. Hence the ripple effect begins, and the non-China investors who had exposure to all this suddenly find themselves unable to make their own debt obligation payments for their own leveraged borrowing.

Why would we not be surprised to discover that banks and institutions around the world borrowed cheap money to invest in Evergrande where they could bank on far higher returns? (Where do you really think all the Fed money printing money goes, anyway? A significant portion is invested by banks in higher interest rate projects around the world, like Evergrande.)

The bottom line result is that Evergrande’s collapse will almost certainly set off fiscal contagion. The debt implosion will likely spread, and if regulators aren’t able to expertly navigate the magnitude of this collapse, it may turn into an avalanche of failed institutions and banks around the world in 2022.

This won’t be instantaneous, of course. Even an avalanche take time to gather speed and momentum. The first big collapse has been ignited and has begun to spread, but much like a tsunami, it travels mostly unseen until it reaches foreign shores, at which time the oceans rise up and dump their catastrophic results in anything that stands in the way.

Today’s Situation Update podcast explains more of what’s happening with Evergrande and the risk of contagion that may, over time, cause catastrophic losses among global investment institutions and banks:

Brad Harris from Full Spectrum Survival has also offered this warning about what happens next with the Evergrande collapse:

Discover new podcasts and interviews each day at: