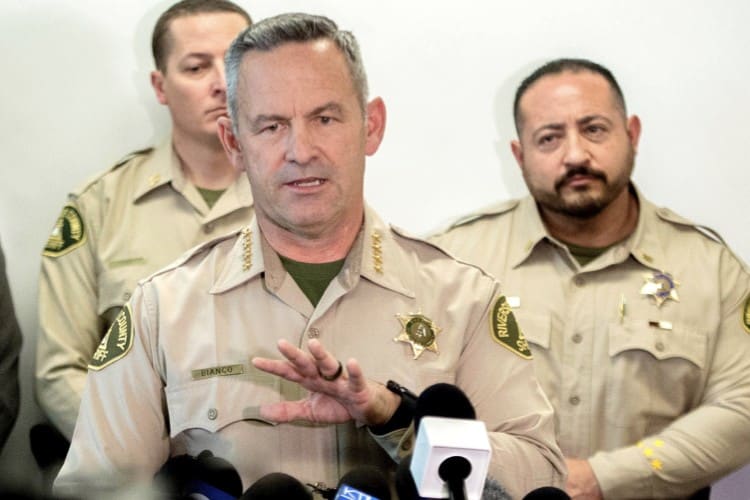 The Biden administration’s vaccine mandate has drawn fire from various parts of the country. Case in point: A California sheriff pledged not to enforce the mandate on the employees under his authority, saying that government has “no authority to mandate your health choices.”

Riverside County Sheriff Chad Bianco used a recent episode of his podcast to announce, “As far as I am concerned I will not mandate a vaccine for employees,” adding, “I will not make it mandated for any new employees to be vaccinated or any current ones.”

Sheriff Bianco said that he gets “labeled a lot” due to his strong stand of issues — especially his strong stand on law enforcement. He said, “Throughout this pandemic, there’s been a couple people that have labeled me as being ‘anti-vax.’ And that’s very unfortunate, because that’s the furthest thing from the truth.” Pointing to himself, he explained, “I’m not anti-vax; I’m anti-vax for Chad, but that doesn’t mean that I’m anti-vax for someone else that feels they may need it or or that does need it — at high-risk categories or even if it just makes you feel better.”

Explaining his decision not to enforce a vaccine mandate on his employees, Sheriff Bianco said, “I believe that’s a very, very personal choice — that you need to make the decision.” Sheriff Bianco is not only the sheriff of Riverside County, but also the coroner and public administrator of the county. His bio on the county’s website says:

That bio also calls Sheriff Bianco the “Chief Law Enforcement Officer of Riverside County.” That description is accurate. From the perspective of the Constitution, the sheriff is the most powerful law enforcer in the county. Sheriffs are elected by the people and therefore exercise the power they draw directly from the people who elect them.

Sheriff Bianco’s decision not to enforce the Biden vaccine mandate reaches way beyond the deputies and civilian employees of the Sheriff’s Office; every one of the “over 4000 dedicated employees” of Riverside County are afforded the free exercise of their right to choose for themselves whether or not to get the vaccine. In that, it also positively impacts the more than two million people who call Riverside County home. By not enforcing the mandate, Sheriff Bianco — as the “Chief Law Enforcement Officer of Riverside County” — sets a precedent for liberty in the matter of forcing vaccines on people who do not want them.

Sheriff Bianco said this is not a political position for him, saying, “It has absolutely nothing to do with politics. I’ve been involved with the COVID crisis, if you want to call it that, from the very beginning,” adding “One of the things about law enforcement, all we really care about are facts. That’s all we want are the facts — we want the truth and we want the facts.” In that, Sheriff Bianco reminds this writer of another (albeit fictional) famous California cop — Detective Joe Friday, whose popular line, “Just the facts ma’am” was a staple of the radio and television series Dragnet.

Sheriff Bianco explained that “it’s very easy to tell when you’re not being told the truth.” He added, “When information changes from one interview to the next, our red flags go up — and the hair on the back of your neck — and it’s like, ‘hey, I’m going to have to question this a little bit.’”

Any seasoned veteran of law enforcement knows that when a witness or (especially) a suspect changes the story from one interview to the next, something is wrong and it is time to drill down to “just the facts.” Sheriff Bianco pointed to some of those changing pieces in the ways the federal government has responded to the “crisis” of COVID, saying, “Everything changed. I mean we can’t get over the fact — these are not political things — you can’t get over the fact that they initially said ‘two weeks.’” He added, “Our entire mission was ‘flatten the curve’ — two weeks to flatten the curve, then it went to a month, then it went to two months, four months, six months — then it went to ‘well, the curve is flat, but we’re still going to have all of these things in place.”

Sheriff Bianco addressed the promises of the vaccine coming on the back of all the shifts in every other way the federal government addressed COVID, saying, “Then the vaccine came out and we’re learning the vaccine may not be as effective as what you think it is.” He said that one of the things that bothers him is people saying he doesn’t want to believe the science. He said they say things such as, “Your a cop, you’re not a scientist.” His response to that is that those people do not believe the science, because “if you’ve already had COVID — which I did and I got over it, which 99.875 percent of the people get over it and everything is fine — your natural immunity provides far more protection than a vaccine. Everyone knows that. That is science; that it not Chad saying that.”

Citing the reasons above and more, Sheriff Bianco said he believes that individuals are best equipped to make this decision for themselves and that he will not enforce the mandate since that is beyond the scope of government authority. He said “keeping you healthy” is not “part of government,” adding, “That’s not the role of government” and “It’s not my role — my role as sheriff: I signed on to keep you safe suspects and from crime and from those things that law enforcement has to deal with.”