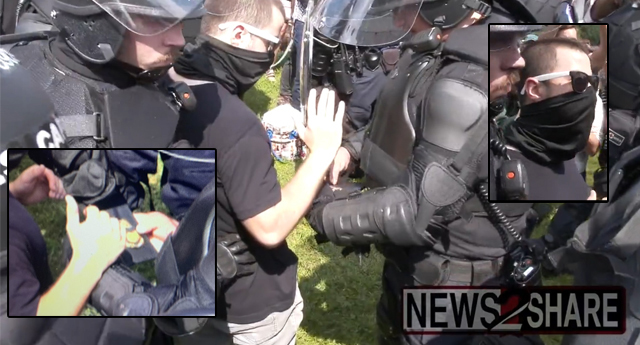 An armed man who was filmed being detained at the Capitol rally in support of Jan 6 suspects appears to have been inadvertently exposed as an undercover law enforcement officer by his fellow police.

Journalist @FordFischer said he only witnessed one detainment at the US Capitol rally in support of the Jan. 6 suspects. The person was undercover from a law enforcement or intelligence agency. pic.twitter.com/bJCwEsRkeh

He tells them where the gun is, and they pull out his badge.

Without disarming or handcuffing him, police extract him from the event. pic.twitter.com/F1n4PeuXkt

“Are you undercover?” the officers asked the masked man, who gave them a badge.

I guess not anymore. pic.twitter.com/EBBx0e8Ucd

The masked man claimed “I’m just here” when asked if he’s undercover as he presented a badge to justify the gun he was apparently wearing, before being pulled out.

Other than undercover, he could have hypothetically been simply masked & off duty with his badge and gun concealed. https://t.co/W9OagHNMij

Here’s a higher resolution image of his badge: