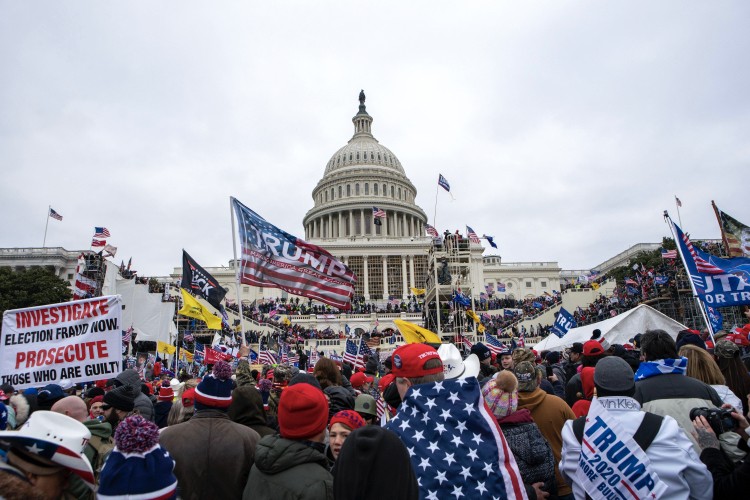 So laments one writer talking about the story of a political prisoner. It’s a story most Americans haven’t heard and some Americans wouldn’t believe. But it’s all too true — and what it portends for our nation is terrifying.

If the United States now may have political prisoners as did the Soviets, it’s then not surprising that it also has a Soviet-like media. Hence the mischaracterization of the January 6 trespassing incident, which we’ve known from the beginning was just that. No “Stop the Steal” protesters were charged with “insurrection” or “sedition,” precisely because authorities realize that such charges are fanciful. No firearms were seized from those entering the Capitol building (one pistol was found on an arrestee on Capitol grounds), nor any other weapons to the best of my knowledge. And the only person violently killed was an unarmed, 5’2” woman named Ashli Babbitt, shot by a cop with a history of incompetence.

What’s more, recently released video — which the DOJ attempted to keep from the public — shows the protesters milling around inside the Capitol building looking not like terrorists but tourists, literally. Why, you might even say it was an “impressive show of democracy in action.”

That is, if you were like House Speaker Nancy Pelosi (D-Calif.). After all, that’s what she said about the leftists who in February-March 2011 took over the Wisconsin Capitol building, the “longest continuous occupation of a major government building in the history of the United States.”

None of those Wisconsin “insurrectionists” ended up languishing in a cell as political prisoners. Nor did any of the actual insurrectionists who seized a Seattle neighborhood last year, cordoned it off and guarded it with weapons, and created CHAZ (the Capitol Hill Autonomous Zone). Oh, it was a lame insurrection, admittedly, but the government’s tolerance of it resulted in two murders and four nonfatal shootings over CHAZ’s 24-day lifespan. But, hey, according to Seattle mayor Jenny Durkan, it was just a “Summer of Love.”

In contrast, there wasn’t much love for Thomas Caldwell, a Navy vet with 20 years’ service. The elderly Caldwell is accused of having plotted to attack the Capitol on January 6 “because he dared to communicate with the Oath Keepers about potentially providing security (a plan that fell through),” according to commentator Andrea Widburg. “Notably, he never entered the Capitol, nor did he commit any serious crime,” she continues.

Nonetheless, the veteran was the target of a pre-dawn raid as if he were Pablo Escobar reincarnated. American Greatness’s Julie Kelly related his plight on Thursday, writing:

“The FBI is at the door and I’m not kidding,” Sharon Caldwell told her husband.

Caldwell, 66, clad only in his underwear, went to see what was happening outside his Virginia farm. “There was a full SWAT team, armored vehicles with a battering ram, and people screaming at me,” Caldwell told me during a lengthy phone interview on September 21. “People who looked like stormtroopers were pointing M4 weapons at me, covering me with red [laser] dots.”

Agents demanded that Caldwell, a former lieutenant commander in the U.S. Navy who suffers from debilitating service-related spinal injuries, come outside and lay down in the grass.

“Someone grabbed my legs and dragged me through the grass. They threw me face down on the hood of the car, kicked my legs apart, put a chain around my waist and put me in handcuffs.” Caldwell said he looked up to see Sharon, his wife of 22 years, dressed in her nightgown holding her hands up with a sock in either hand. She, too, was covered in red dots from the weapons aimed at her. Sharon, 61, begged to put on her socks before they forced her outside in the cold. “I said a prayer, ‘Father, please don’t let them kill my wife,’” Caldwell said through sobs.

Widburg points out that the hapless vet, like so many other January 6 protesters, later unwisely agreed to answer the FBI’s questions without a lawyer.

(Note: Even General Michael Flynn, an experienced and in my estimation a great man, made this mistake — and subsequently was railroaded by the FBI. Thus would a great friend of mine who’d been a police cadet often warn that you must never, ever — no matter how innocent you may be — speak to authorities without an attorney. It really is true that anything “you say can and will be used against you in a court of law.”)

But Caldwell knew he “didn’t have anything to hide” (unlike our government). Despite this, all his electronics and even his family photos were seized, an agent purposely damaged an “heirloom” ’63 Thunderbird he owns, and he was charged with six federal crimes inclusive of the Capitol-attack-plot allegation.

The result? Caldwell spent 53 days in jail, all but four in solitary confinement; was denied pain medication he required for the aforementioned service-related spinal injuries; and was brutalized by some correctional officers (others, and all the inmates, treated him compassionately). He said he thought he’d die in prison and that only his faith and wife’s love sustained him.

Caldwell was released only because he happened to get an effective lawyer, and is now under house arrest. Other January 6ers aren’t so lucky, however, not having “the money or the contacts to get a good criminal defense attorney,” writes Widburg. One of them is Jacob Chansley, the confused man who sported a furry, horned hat and who has held some left-wing views. He’s still in jail — eight months later — in solitary confinement.

(If he’d just thrown in with BLM/Antifa in perpetrating their 600-plus 2020 riots, destroying billions in property and hurting and killing people, he’d likely still be anonymous and walking free.)

In contrast, the “FBI doesn’t seem to be charging people who were very active in making things happen [at the Capitol], leading to the reasonable conclusion that those people are informants and agents,” Widburg also tells us.