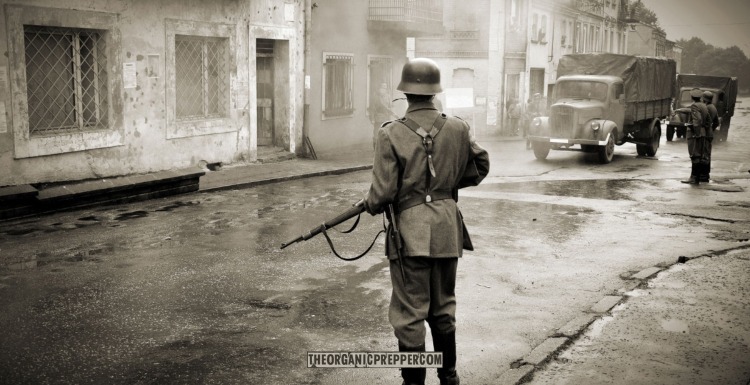 The rights of Americans are getting trampled on at every turn. Unfortunately, the right to self-defense as enshrined within the Second Amendment is no exception to being spit upon by communists/globalists (I admit to a bit of redundancy there).

Since President Joe Biden has been in office, we’ve seen efforts such as pre-crime surveillance plans, the administration asking SCOTUS to uphold warrantless gun confiscation, and executive orders that could turn a whole lot of gun owners into felons. In fact, the Biden administration has been very open about Biden’s willingness to “get the job done” with gun control executive orders. Or royal decrees. To-may-to, to-mah-to.

A lot of folks are firmly convinced gun control could never happen in the United States of America. Of course, neither did the Germans before WW2. Nor did the Venezuelans. Other South Americans didn’t think so either.

As Selco writes in his article, Gun Confiscation: Here’s How it Might Actually Go Down”:

The 2nd Amendment is very cool, and I like it very much, but here is the ugly truth:

History is a fantastic instructor and can perhaps help others better understand why this is such an important right to defend. Today, let us turn to the series of gun control laws passed in pre-World War 2 Germany. Does any of this look familiar?

Everyone now needed a license for anything related to guns due to this law. Whether manufacturing, assembling, repairing, or selling a gun, the person would be required to have a government-issued license. Not only did this law apply to guns, but it applied to ammunition as well. Anyone wanting to purchase ammunition or even to reload their own now needed a license to do so.

Arguably, this single law laid the foundation for all of what followed next in Germany throughout the ’30s and ’40s.

Not even a year passed before the Germans decided they needed further restrictions with this law. July 1928, the German government decreed that citizens were now required to have a permit to acquire more than one gun. Furthermore, citizens were only permitted 50 cartridges for that weapon.

This law banned the carrying of any weapon off of one’s premises. By extension, this law made it illegal for groups of armed men to assemble in public places. The law specifically targeted clubs and knives. However, the law also included guns considering the exemption of those with (difficult to obtain) firearm carry permits.

February 15, 1933 – Registration of all firearm licenses

Nazi officials now demanded that all lists of registered firearm holders be delivered to the municipal government. The Nazi’s gave three weeks to comply. Anybody who the government deemed a potential threat (aka politically opposed) to the Nazi party had their firearm license revoked. According to reports, Nazis used pre-war lists of gun owners to confiscate firearms, and many gun owners simply disappeared. Following confiscation, the Nazis were free to wreak their evil on the disarmed populace, such as on these helpless Jews from the Warsaw Ghetto. [source]

February 28, 1933 – Decree of the Reich President for the Protection of the People and the State

As Hitler gained power on January 30, 1933, gun control efforts increased exponentially. [source] This decree suspended the German constitution entirely. Personal liberty, freedom of speech, and the right to assemble were all banned by the government under the guise of national security from domestic terrorists (e.g., German communists).

The government could now open one’s mail or monitor one’s phone calls whenever they pleased, could conduct unlimited raids on individuals’ homes, and decided anyone engaged in “rioting” could potentially face the death penalty.

The government routinely conducted raids to search for forbidden weapons. However, the government could effectively silence any public discussion on the morality of such actions. Should one attempt to congregate with others to petition the government for redress of grievances – and should this gathering be deemed a riot – all present could face legalized execution. [source]

Germany’s government ordered citizens to surrender arms, emphasizing those considered “military weapons.” Claims state that citizens were offered the freedom to join the SA, SS, Stahlhelm, or the National Revolution units if they wanted to carry a weapon. Should you choose not to join these units, you forfeited your right to own weapons.

All those who didn’t join the Nazi organizations and kept their guns were “viewed as an enemy of the national government” and punished accordingly.

As of this date, people could no longer import handguns into Germany. “For reasons of public safety, it was no longer possible to tolerate this situation,” stated the decree. It was now illegal to import a pistol “until further notice.”

From what I can tell, this ban on handgun importation was permanent.

After the global release of the hit book Rubber Truncheon, the world finally becomes aware that Germany has built a system of concentration camps for political prisoners. The author, Wolfgang Langhoff – one of these prisoners – details how Germans who violated weapons laws were routinely rounded up and shipped off to one of these camps.

Langhoff also details how a veneer of legality was brushed over all of the Nazi’s actions.

“Firearms in the hands of the Jews represent a considerable danger for the German people.” As a result, Jews were scrutinized under a microscope to determine whether or not they really “needed” a weapons permit.

In reality, this played out with Jews being denied weapons permits virtually 100% of the time.