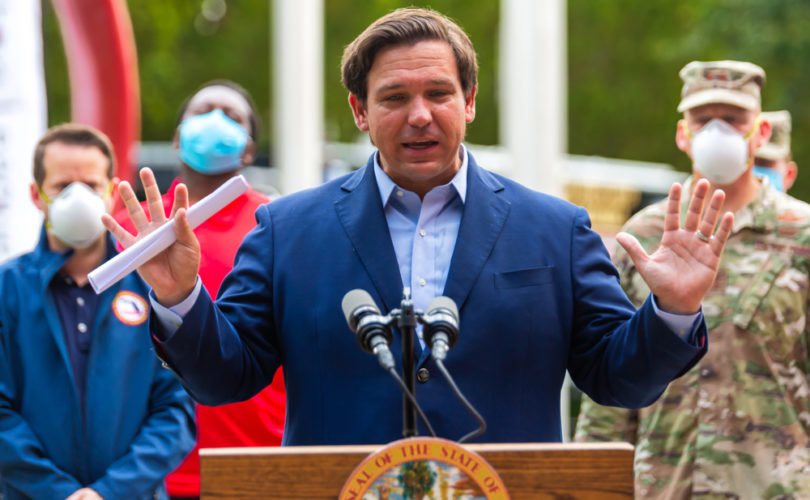 At least 20 Republican states have announced that they may take legal action to block the Biden administration’s COVID-19 vaccination requirements for tens of millions of American workers in the private sector.

Dozens of Republican governors and state attorneys general quickly slammed the new COVID-19 rules unveiled by Joe Biden in a speech yesterday, which include a dictate to force U.S. businesses with more than 100 employees to require workers either to take the coronavirus vaccine or undergo weekly testing.

That rule, which has yet to be formalized, will come through the Department of Labor’s Office of Safety and Health Administration (OSHA), Biden said, and may lead to $14,000 in fines per violation. Biden also announced that he will mandate vaccination, with no testing option, for all federal employees, federal contractors, healthcare workers at facilities that accept Medicare or Medicaid funding, and 300,000 educators with the federal Head Start program.

The move drew almost unanimous backlash from conservative leaders across the country.

“When you have a president like Biden issuing unconstitutional edicts against the American people, we have a responsibility to stand up for the Constitution and to fight back, and we are doing that in the state of Florida,” Florida Gov. Ron DeSantis said Friday. “This is a president who has acknowledged in the past he does not have the authority to force this on anybody, and this order would result potentially in millions of Americans losing their jobs.”

I will see you in court soon! https://t.co/Ukugz3Wx6b

“OSHA cannot dictate personal health care decisions for Missourians,” read a statement from Missouri Gov. Mike Parson’s office on Friday. “Missouri is not under an OSHA state plan, and Parson will not allow state employees to be used to enforce this unconstitutional action.”

As Biden began his remarks last night, Gov. Henry McMaster of South Carolina even vowed to fight him and fellow “radical Democrats” “to the gates of hell.” Alaska Gov. Mike Dunleavy described the administration’s “unenforceable” vaccine rules as “a case for the 25th Amendment.”