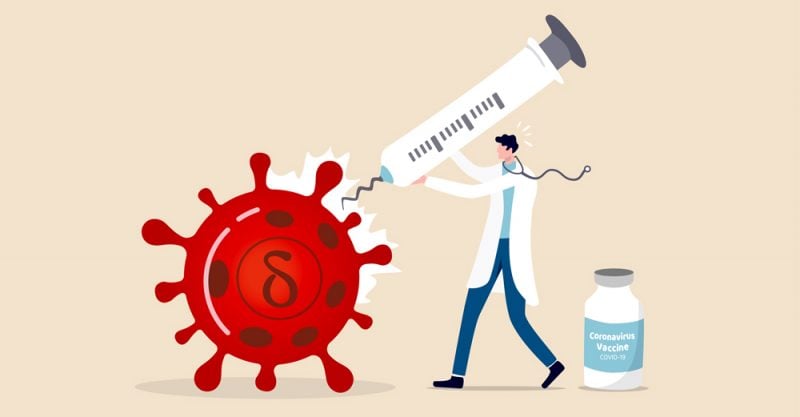 According to research published last week in Scientific Reports, the highest risk for establishing a vaccine-resistant virus strain occurs when a large fraction of the population has already been vaccinated but the transmission is not controlled.

According to research published last week in Scientific Reports, vaccinated people may play a key role in helping SARS-CoV-2 variants evolve into those that evade existing COVID vaccines.

The researchers concluded three specific risk factors that favor the emergence and establishment of a vaccine-resistant strain. They are: a high probability of initial emergence of the resistant strain; high number of infected individuals; and low rate of vaccination.

However, the analysis also showed the highest risk for establishing a resistant strain occurs when a large fraction of the population has already been vaccinated but the transmission is not controlled.

Virologists have a name for variations of a virus that slip past vaccine- or illness-induced immune defenses — they’re called “escape mutants.”

“When most people are vaccinated, the vaccine-resistant strain has an advantage over the original strain,” Simon Rella of the Institute of Science and Technology Austria, told CNN.

“This means the vaccine-resistant strain spreads through the population faster at a time when most people are vaccinated,” said Rella, who worked on the study.

The data is consistent with a study released last week by the Centers for Disease Control and Prevention which showed vaccinated people may transmit the Delta variant —  now responsible for 80% of COVID cases in the U.S. — just as easily as the unvaccinated.

Health officials warn the Delta variant can “spread quickly” and “spike a new pandemic,” but so far, statistics don’t justify another round of lockdowns or widespread vaccination of children.

The team of scientists who published the data in Scientific Reports said their findings follow what’s known as selective pressure — the force that drives any organism to evolve.

“Generally, the more people are infected, the more the chances for vaccine resistance to emerge,” said Fyodor Kondrashov of the Institute of Science and Technology Austria.

“So the more Delta is infectious, the more reason for concern,” Kondrashov said. “By having a situation where you vaccinate everybody, a vaccine-resistant mutant actually gains a selective advantage.”