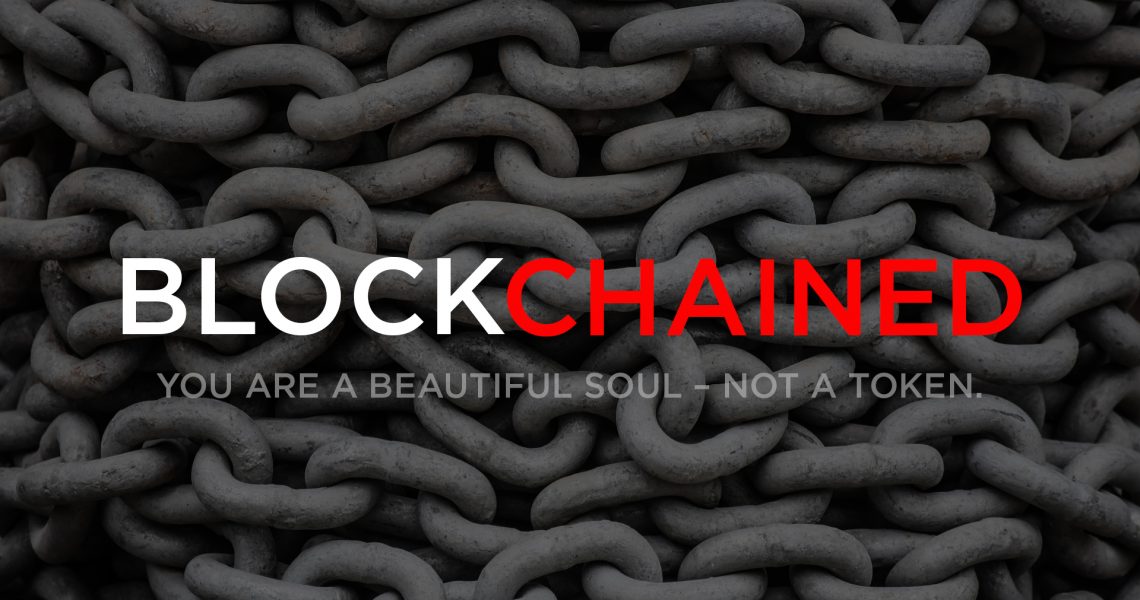 Let’s get right to it because there’s a lot to cover. Part 3 tackled the key implementers of the digital identity being assembled through the vaccine id passports, revealing the true agenda. Part 2 broke down the who, what, when, where, why, and how. It’s good to understand what’s at stake and who’s behind it, before diving into part 4. Blockchained will cover some of the most important aspects of this entire agenda against all of humanity.

• The QR Code is About Your DATA, Your DNA, and Your BODY

• Wallets, Crypto, Central Bank Digital Currency (CBDC), and The Banks of The Future

In short, once you have submitted to getting your digital identity QR code, you have opened the door for them. Think of it like WordPress that uses an endless amount of plugins to build your perfect site. You have your smartphone as the device, the QR code is the tool, and all of the individual apps and institutions hook right in to your QR code. You’ve now linked your health records, injection records, bank account, financial loans and assets, shopping, events, travel, you name it! They are using the blockchain framework to run, sync, share, and distribute, all of that data under the guise of “convenience” for you. Some will be centralized, some decentralized, but at the end of the day your data is out there as a means for them to control you, remove all privacy, and be used for their AI agenda. This only happens if you take that first step. Whether it’s your bank requesting you create a digital ID, your state for a driver’s license, institutions for a “vaccine ID passport,” or whomever makes the request or demand, don’t open that door.

There is a list of solutions for how to combat this at the end of the report. Don’t miss it!

A quick peek at what the World Economic Forum predicts for the world in 2030:

Normalization of QR Codes To Access Your Data, Your DNA, and Your BODY

A QR code is not just a flashy little symbol that gets you a free donut after accumulating points, a convenient little app on your phone to prove you’ve received the Covid-19 injection that allows you access into a concert, or a quick way to make a purchase, though they want everyone to believe that’s the sole purpose. It is far more than that, and most people can’t even begin to understand the repercussions of its use and how they have weaponized it. This goes beyond the Covid injection data collection scheme for controlling humans across a smart grid, and enters straight into the eugenicists’ dimension.

The QR code system was invented in 1994 by Masahiro Hara from the Japanese company Denso Wave. It was approved in December 2011 by GS1, an international standardization organization, as a standard for mobile phones, and by the International Standardization Organization (ISO) in 2020. Now days, everyone is seeing and utilizing the QR code, not only for vaccine id passports, but for shopping, menus at restaurants, special programs at food chains, and just about everywhere. They’ve done a great job of normalizing a machine-readable visual symbol that contains data for identifiers, locations, tracking points, etc. The problem is, a QR code can only handle up to 7,089 characters, so in order to store a person’s entire life data, as the globalists wish to do, they need to link it through a blockchain platform.

Up until more recently, internet protocol version 4 (IPv4) didn’t have enough IPs in the world to accomplish this task, but with the new IPv6, there will be no shortage of IPs to make this all integrate effectively. This will allow for every single human, computer, cell phone, smart product, IoT sensors, and any other device that connects to the internet to have a numerical IP address to communicate with other devices, accomplishing their smart grid goal. Throw 5G into the mix, and we’re off to the races!

The “human barcode” and “microchipping” dystopian technology on human beings have long been censored and dismissed by mainstream news as conspiracy theory for years, despite the fact that the science and products exist, in some locations have already been implemented, and MIT has even published a study about it – funded by the Gates Foundation, of course. Even the Smithsonian couldn’t resist covering MIT’s study on how a “spiky patch” could invisibly record vaccination history under the skin, explaining that “the human body is an extraordinary record keeper.”

Here’s what’s interesting about this particular method – they liken this “tattoo-esque” technology of microneedles that inject patterns of invisible nanoparticles under the skin, as QR codes that can be scanned by smartphones.

An NIH study from 2012 shows how they carried out research to determine the best way to identify and store DNA data, which revealed that the QR code was found to have the largest coding capacity and high compression ratio, allowing them to convert a DNA sequence to and from a QR code. They then constructed a web server for biologists to utilize QR codes in practical DNA barcoding applications. In 2021, the National Science Foundation raved about the next-generation sequencing technologies that have revolutionized genetic data, by allowing them to store the data in a QR code so they can simply scan a specimen and extract the data, which streamlines data collection.

What’s the next step? Now that they’ve managed to store DNA data into QR codes, putting that data onto a blockchain platform is the next best thing for scientists. Just imagine the millions of people who have submitted their DNA through Ancestry, 23andMe, and countless other eugenicist-owned organizations, such as George Church’s Nebula Genomics. Not that they are all putting the data on the blockchain yet, but Church and others certainly are. So where is this heading, and what is the QR code really about?

“Genomic big data is projected to outgrow video and text data within the next few years.” – Nebula Genomics

Molecular Engineer, Chemist and Geneticist George Church founded Nebula Genomics in 2018. They run whole genome sequencing that decodes 100% of a person’s DNA to “unlock your genetic blueprints.” For just $99 – $299 you can “begin your journey of discovery without risking the privacy of your most personal information” – until he rolls it onto the blockchain. They have partnered with Oasis Labs for “cutting-edge privacy technology” on blockchain. People will surely argue that blockchain is protected and none of these nefarious characters will have access to any of your data. Keep reading.

Why blockchain? What is their goal? Nebula wants to connect people with companies, and give people the opportunity to sell their genetic information that Nebula sequenced, to these companies, in which case people will receive payment in the form of digital tokens, all in the name of science. This isn’t the only company Church owns or co-owns in regards to DNA collections going on the blockchain. More on this below.

Just how far will Church go to achieve being able to create whole genome engineering of human cell lines – to “write DNA and build human (and other) genomes from scratch?” In early 2021, there were warnings going out to all U.S. states regarding China trying to setup Covid testing labs in an attempt to gather DNA and other data on U.S. citizens. Even mainstream media couldn’t shy away from this story. The company, BGI and it’s U.S. subsidiary CGI were approaching city, county, and state officials to sell their supplies and setup full labs. BGI was founded in 1999 as the Beijing Genomics Institute, had participated in the Human Genome Project that Church initiated, and was given a line of credit from state-run China Development Bank and used it to purchase 128 DNA sequencers from Illumina who is a massive producer of DNA sequencers out of California, which was the largest order Illumina had ever received (more on Illumina further down). In 2017, BGI announced the launch of the George Church Institute of Regenesis, in collaboration with Church, who has been a longtime advisor to BGI. Church is the chief scientist of the institute and it’s co-located with the China National GeneBank in Shenzhen. Their plan, announced in 2017, over two years prior to Covid, was to develop technologies in high-density DNA storage, biomanufacturing of natural products, and genome editing for medicine.

In his appearance on the Stephen Colbert show, Church explained how they can read ancient DNA, write it, and edit it with Crisper, and they’ve made 15 edits so far to bring back extinct DNA. For example, he’s been inserting wooly mammoth DNA into elephant skin cells which can then be turned into stem cells and used to produce embryos with the hope of growing them in an artificial womb. “It’s going to be more humane and easier if we can set up hundreds of [embryos] in an incubator and run tests,” says Church.

This isn’t surprising, because in a 2013 interview with the German magazine Der Spiegel, Church said, “you have got a shot at anything where you have the DNA. The limit for finding DNA fragments is probably around a million years.” When asked about the DNA fragments of Neanderthals that scientists have, who existed 30,000 years ago, Church said that the DNA could be assembled into an embryo which could be planted inside a human – a very daring woman. He believes that significant knowledge could be gained from cloning Neanderthals, stating…

“We know that they had a larger cranial size. They could even be more intelligent than us. When the time comes to deal with an epidemic or getting off the planet or whatever, it’s conceivable that their way of thinking could be beneficial.”

Though Church acknowledged ethical and legal dilemma’s, he was quick to point out that “laws can change.” That interview took place in 2013.

Who is Dr. George M. Church, in a nutshell? This barely scratches the surface:

• Director of the U.S. Department of Energy Technology Center

• Co-authored over 550 publications and holds more than 150 patents

• Co-authored the book ‘Regenesis: How Synthetic Biology Will Reinvent Nature and Ourselves’

• Led the project on barcoding the brain, via a $21 million 5-year brain mapping grant under the Machine Intelligence from Cortical Networks program sponsored by the Intelligence Advanced Research Projects Activity. Their goal was to give neurons unique barcodes, linking them across synapses to create maps of their connection through gene sequencing to design computer architectures that could perform tasks that are easy for a brain but out of reach for artificial intelligence.

• In 2008, Church, Bill Gates, and Leena Peltonen from the Wellcome Trust Sanger Institute were all speaking at a genome sciences symposium at the University of Washington. In 2013, George Church was invited to speak at the Wellcome Trust Epigenomics of Common Diseases conference. In 2019, he was the keynote speaker for another Wellcome Trust event on new technologies. At this event, Church gets a chuckle while referring to this image below as his “conflict of interest slide,” and his “thank you slide for organizations that help get our technology out into the real world.”