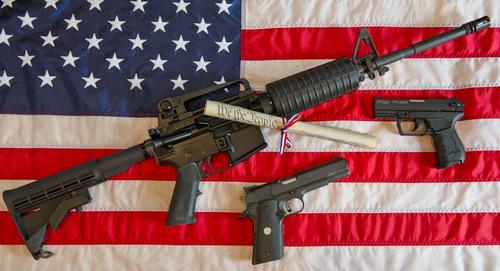 What is Going on With Gun Control Right Now in 2021?

Just a general warning. The statements presented may start to sound like a conspiracy theory, but I promise you, dear reader, it is not.

There’s been much talk at the range recently about the new proposed gun control by the Biden Administration. Many people are perplexed. We get a ton of questions, emails, and phone calls asking, “Will this affect me?”, “What can I do?”, “Why are they doing this?” among others.

I want to answer these questions as best as I can. We’ve been in the firearms industry here at TMGN since 2013 and have had a shop & range since 2015, so we’ve seen tons of changes from different administrations. There is a clear agenda here, and I’m reasonably sure most gun owners are going to be a little unhappy with the information I’m about to deliver.

So, I guess the main question to answer first would be, how did we get here? Right now, we’re looking at two (maybe more, who knows what the future holds) rule changes coming from the Biden DOJ and the ATF. These rule changes are an example of the Biden Admin governing by executive fiat, as they know they don’t have the votes in the Senate to pass any of their gun control agenda. But let’s unpack this. This situation is a culmination of events starting way back.

Also, before we start, for the sake of those new to firearms (statistics show 9 million people bought their first gun in 2020 alone), many more in 2021. To those of you, we say welcome!) Let me do some quick-term definitions and give some critical context.

NFA (National Firearms Act): The National Firearms Act of 1936. The NFA was the first major federal gun control act in American history. The NFA created a tax and registry for Suppressors (sometimes called silencers), Short Barrel Rifles & Shotguns (referred to as SBRs / SBSs respectively), and Machine Guns. If you wanted to own any of these items, you’d have to submit to a lengthy background check and pay a $200 tax. (Equivalent to $4400 in 1934) In return, you’d receive what’s known as a “tax stamp” showing that you were approved to own any of these “NFA items”.

FFL: Federal Firearms License, shortened to FFL is used interchangeably to refer to a Firearms licensee aka a Dealer, or the physical License that is given by the federal government for the ability to manufacture firearms and/or to sell them. FFLs are overseen by the ATF.

ATF Form 4473: The main form that people are required to fill out when purchasing a firearm. FFLs are required to hold this form on site for 20 years. The forms are used in the event a firearm is used in a crime, the ATF can “run a trace” on that firearm and figure out who it was last transferred to.

NICS: The National Instant Criminal Background Check System. The NICS conducts background checks on people who want to own a firearm or explosive, as required by law. When a person tries to buy a firearm, the seller, known as a Federal Firearms Licensee (FFL), contacts NICS electronically or by phone. The prospective buyer fills out the ATF form 4473, and the FFL relays that information to the NICS. The NICS staff performs a background check on the buyer. That background check verifies the buyer does not have a criminal record or isn’t otherwise ineligible to purchase or own a firearm.

1968 Gun Control Act: The creation of the system that we all know today. The GCA created the FFL system, banned mail-order guns, and more. This law has been updated a few times, most notably in 1993 with the Brady Handgun Violence Prevention Act, which created the NICS system we use today. The GCA replaced and updated the Federal Firearms Act, an older provision enacted in 1938.

2008 Heller Decision: In DC V Heller, the supreme court ruled that the 2nd Amendment protects an individual’s right to possess a firearm, unconnected with service in a militia, and use that firearm for traditionally lawful purposes. Before this, gun control advocates argued that the 2nd Amendment had more to do with state militias than individual firearm ownership. With this decision, the Supreme court said that view was incorrect.

Stabilizing Brace: Sometimes called a pistol brace. A Device designed to help shooters with limited mobility stabilize their firearm more easily. Attached to the rear of a gun, usually equipped with straps or some way to allow the shooter to use their forearm to help stabilize the firearm while shooting.

Bump Stock: Bump fire stocks are gun stocks that are specially designed to make bump firing easier, which assist semi-automatic firearms with somewhat mimicking the firing motion of fully automatic weapons but does not make the firearm automatic. Essentially, bump stocks assist rapid fire by “bumping” the trigger against one’s finger (as opposed to one’s finger pulling on the trigger) thus allowing the firearm’s recoil, plus constant forward pressure by the non-shooting arm, to actuate the trigger.

Ghost Gun: Made up term to make “homemade firearm.” It’s made to sound scary to those with little firearms knowledge. It has been common practice for people to build their guns. It’s also perfectly legal to do and has been for years, contrary to what corporate media outlets would like you to believe. If you make a firearm in your house for personal use, it’s legal and does not have to be serialized or registered. Although it still must conform to Federal firearms law and not violate the NFA.

So, where do we start?

The United States has a long history of gun control. But let’s not be complete pessimists here. On the bright side, the ability to carry a pistol concealed for self-defense has been significantly expanded in recent years and has been trending towards fewer restrictions nationwide since 1976 when Georgia established the “Shall issue” process we have today. (Shall issue is when you are guaranteed a permit should you complete the state’s process for acquiring said permit. whether that means taking a class or paying a fee. Inversely, States like Maryland and California use a process called “May Issue” where even if you complete the requirements for obtaining a permit, the state must still deem your “reason” for having said permit to be permissible. This has been declared unconstitutional in D.C. but that’s a story for a different time.)

What is ironic here is that if you were to look at crime statistics, most crimes committed with a firearm, said firearm is a handgun. Why? It’s simple. Criminals prefer smaller, more concealable firearms. It’s hard to conceal an AR15, regardless of barrel length. Ironically when anti pistol legislation is proposed, it’s much harder for the government to pass. So, the anti-gun lobby has (for now) given up on the issue. Instead, they’ve targeted the scary-looking modern sporting rifles of today. Most notably, the AR15. However, their aim does extend to most semi-automatic rifles that accept a detachable box magazine.

Now that we’ve established what they’re after, let’s talk about the events leading up to today.

On the evening of October 1st, 2017, Stephen Paddock opened fire upon the crowd attending the Route 91 Harvest music festival from the 32nd floor of the Mandalay Bay hotel. He killed 60 people and wounded 411. It was the deadliest mass shooting in the history of the United States. Paddock was able to achieve high rates of fire with a device known as a bump stock.

President Donald Trump ordered his Justice Department to find a way to ban the bump stock. The DOJ decided to classify the bump stock device as a machine gun in December of 2018, going into effect in March 2019. Since the only legal way to own a machine gun is to have a registered one on the NFA before 1986, bump stocks were effectively made illegal, and anyone in possession of one would be subject to 10 years imprisonment and a $250,000 fine.

The problem here is that a bump stock isn’t a machine gun. It’s not even a firearm at all. It’s a piece of molded plastic that uses the gun’s recoil, discharging a round to “bump” the trigger. It does not guarantee automatic fire, nor does it modify a semi-automatic rifle and “convert” it to full auto. The firearm itself would remain semi-automatic, and the bump stock would allow the user to fire faster, using the force of the recoil.

Most gun owners weren’t up in arms over the bump stock ban. Public opinion of the ban was positive. More comments supported the proposed rule change on the federal register than opposed it—a rare thing for gun control. Many gun owners viewed bump stocks as a novelty and wrote it off entirely. The issue, though, was much more complex. It had little to do with the bump stock itself and much more to do with reclassifying an item that was not a firearm itself under the NFA and effectively banning it with no recourse for gun owners.

Fast forward to 2020. In May, the ATF announced it was changing its 4473 form. The form change would go into effect in November of 2020. Most gun owners are familiar with this form, even if they don’t know it by name. It’s the form that is filled out anytime that you purchase a firearm from a firearms dealer. It holds all the information of the individual looking to buy a gun before the FFL performs a background check through the federal NICS system.

“Why is a simple form change relevant?” you might ask. Well, the ATF did update the form itself. But the ATF also changed the layout of the form dramatically. Before the change, the ATF had all the personal information for the individual filling out the form on the first page. The firearm information was located on a separate page. The change moved the buyer’s information and the firearm information (serial number, make, model, and more) to the first page. Here’s where we get into speculation a bit, but I promise, there’s a reason for it.

I believe that the ATF is setting up for eventually keeping a digital database of 4473s. They are currently forbidden to do this by law. The only way that they’re legally allowed to keep physical 4473 forms is at one of their facilities in Martinsburg, WV. That facility is so full of paperwork that recently, the floor just caved in.