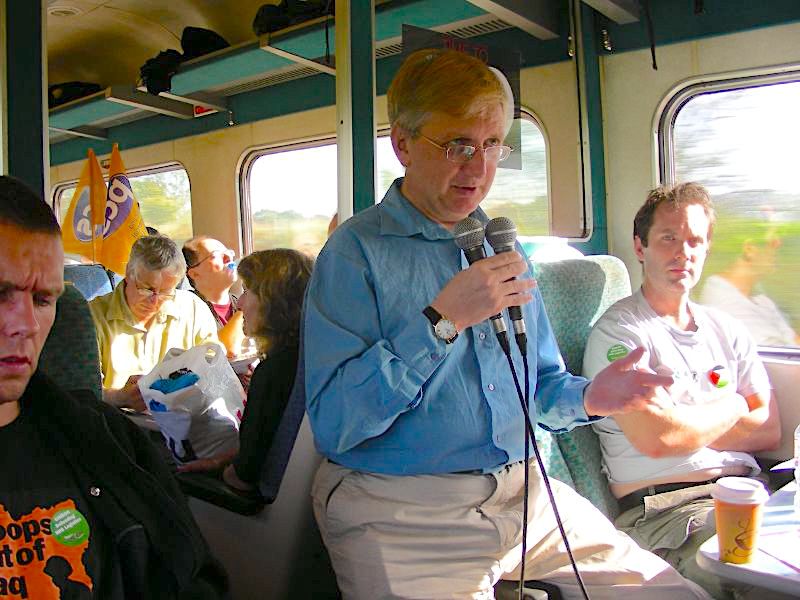 It may not be surprising that corporate journalists, keen to hold on to their jobs, are consenting through their silence to this all-out assault on journalism and free speech, with Craig Murray its latest victim, writes Jonathan Cook.

Craig Murray, a former ambassador to Uzbekistan, the father of a newborn child, a man in very poor health and one who has no prior convictions, will have to hand himself over to the Scottish police on Sunday morning. He becomes the first person ever to be imprisoned on the obscure and vaguely defined charge of “jigsaw identification”.

Murray is also the first person to be jailed in Britain for contempt of court in half a century – a period when such different legal and moral values prevailed that the British establishment had only just ended the prosecution of “homosexuals” and the jailing of women for having abortions.

📢PRESS RELEASE: Craig Murray to be first person incarcerated in the UK over media contempt case in 50 years, setting dangerous legal precedent for freedom of speech and equality before the law.

Murray’s imprisonment for eight months by Lady Dorrian, Scotland’s second most senior judge, is of course based entirely on a keen reading of Scottish law rather than evidence of the Scottish and London political establishments seeking revenge on the former diplomat. And the UK supreme court’s refusal on Thursday to hear Murray’s appeal despite many glaring legal anomalies in the case, thereby paving his path to jail, is equally rooted in a strict application of the law, and not influenced in any way by political considerations.

Murray’s jailing has nothing to do with the fact that he embarrassed the British state in the early 2000s by becoming that rarest of things: a whistleblowing diplomat. He exposed the British government’s collusion, along with the U.S., in Uzbekistan’s torture regime.

His jailing also has nothing to do with the fact that Murray has embarrassed the British state more recently by reporting the woeful and continuing legal abuses in a London courtroom as Washington seeks to extradite WikiLeaks’ founder, Julian Assange, and lock him away for life in a maximum security prison. The U.S. wants to make an example of Assange for exposing its war crimes in Iraq and Afghanistan and for publishing leaked diplomatic cables that pulled the mask off Washington’s ugly foreign policy.

Murray’s jailing has nothing to do with the fact that the contempt proceedings against him allowed the Scottish court to deprive him of his passport so that he could not travel to Spain and testify in a related Assange case that is severely embarrassing Britain and the U.S.. The Spanish hearing has been presented with reams of evidence that the U.S. illegally spied on Assange inside the Ecuadorean embassy in London, where he sought political asylum to avoid extradition. Murray was due to testify that his own confidential conversations with Assange were filmed, as were Assange’s privileged meetings with his own lawyers. Such spying should have seen the case against Assange thrown out, had the judge in London actually been applying the law.

Actually what I found most shocking about that was the peculiar determination of the judges to make sure that, during the three weeks we have to lodge the appeal, I am not allowed to go to Spain to testify in the criminal prosecution for the CIA spying on Assange’s legal team.

Similarly, Murray’s jailing has nothing to do with his embarrassing the Scottish political and legal establishments by reporting, almost single-handedly, the defence case in the trial of Scotland’s former First Minister, Alex Salmond. Unreported by the corporate media, the evidence submitted by Salmond’s lawyers led a jury dominated by women to acquit him of a raft of sexual assault charges. It is Murray’s reporting of Salmond’s defence that has been the source of his current troubles.

And most assuredly, Murray’s jailing has precisely nothing to do with his argument – one that might explain why the jury was so unconvinced by the prosecution case – that Salmond was actually the victim of a high-level plot by senior politicians at Holyrood to discredit him and prevent his return to the forefront of Scottish politics. The intention, says Murray, was to deny Salmond the chance to take on London and make a serious case for independence, and thereby expose the SNP’s increasing lip service to that cause.

Murray has been a thorn in the side of the British establishment for nearly two decades. Now they have found a way to lock him up just as they have Assange, as well as tie Murray up potentially for years in legal battles that risk bankrupting him as he seeks to clear his name.

And given his extremely precarious health – documented in detail to the court – his imprisonment further risks turning eight months into a life sentence. Murray nearly died from a pulmonary embolism 17 years ago when he was last under such relentless attack from the British establishment. His health has not improved since.