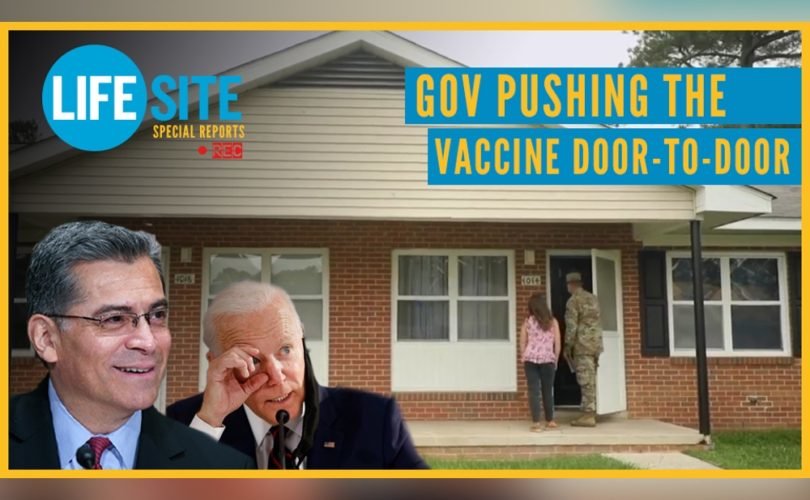 July 30, 2021 (LifeSiteNews) — Before the White House announced the government would be “literally knocking on doors” to push coronavirus vaccines, health workers, military personnel, and volunteers in some states were already doing just that.

“We need to go to community by community, neighborhood by neighborhood, and oftentimes, door to door — literally knocking on doors — to get help to the remaining people protected from the virus,” President Joe Biden said on July 6, 2021. That same day, White House Press Secretary Jen Psaki also said that a top priority for the administration is “targeted, community-by-community, door-to-door outreach to get remaining Americans vaccinated by ensuring they have the information they need on how both safe and accessible the vaccine is.”

Liberal media immediately jumped to defend the initiative, claiming conservatives had “mischaracterized the effort as the deployment of government agents to strong-arm reluctant Americans.” Rather, this is just a push to “enlist volunteers, including local doctors and pastors,” insisted ABC News, which was also forced to admit any White House messaging about the vaccine being a personal choice was subsequently “muddied … when Health and Human Services Secretary Xavier Becerra told CNN in an interview that ‘it is absolutely the government’s business’ to know who isn’t vaccinated because of the money spent on the effort.”

A lengthy News & Observer piece ­­from June 11, 2021, details a door-knocking effort in by the Johnston County Health Department in North Carolina. It begins:

On the front stoop of her Smithfield home, a trio of National Guard troops flanked a petite woman with a clipboard, her pink floral top stark against the camo uniforms at her back.

Hines was expecting them.

About two weeks ago, a similar crew arrived on her doorstep offering COVID-19 vaccines in Woodall Heights, a neighborhood of public housing and private residences off Interstate 95. Hines and Reginald Archibald, who she lives with, accepted. So did their neighbor across the street.

A video accompanying the story shows burly, masked National Guardsmen helping the local health department set up an outdoor tent. One of the uniformed National Guardsman can be seen canvassing the neighborhood with a cheery-sounding woman, and standing by as the woman offers a resident the vaccine.

This sort of scenario — a government representative pushing an experimental vaccine at citizens’ doorsteps as a menacing solider stands by — is exactly what many Americans were worried about when then-President Donald Trump said in the fall of 2020 that the “military … is going to distribute the vaccine.” (Scroll down to read how legal experts recommend interacting with vaccine door-knockers.)

The News & Observer report makes it clear the people administering the vaccine know very little about the health history of the residents they’re injecting:

The convenience of Tuesday’s neighborhood clinic was hard to ignore.

“This your first one?” Mary Banks asked as she prepared to give [Briona] Davis her shot.

After two hours, with the street empty, the crew began folding up tents and tables. They filed forms, pamphlets and unused vaccine sticker sheets back into portable file boxes. The little freezer and its 12 remaining doses were returned to the trunk of Smith’s SUV.

No mention is made of what will happen if a person has a bad reaction (myocarditis, blood clots, Guillain-Barré syndrome, miscarriage) to one of the vaccines sometime “after two hours,” when the National Guard-manned injection tent has been taken down for the day and the needle-in-hand workers are gone. The News & Observer report does make it clear some of the people in public housing may not have access to “a car or affordable childcare.” Others may not have “paid time off from a minimum wage job” or “health insurance.”

Stating the obvious, the article added, “A lack of insurance might mean you don’t often interact with a medical provider offering the shot.”

So residents experiencing a medical emergency after the injection — or even just adverse vaccine effects — may be left with no choice but to call 911 (and be stuck with an ambulance bill of several thousand dollars), or just return to their minimum wage jobs and try to cope.