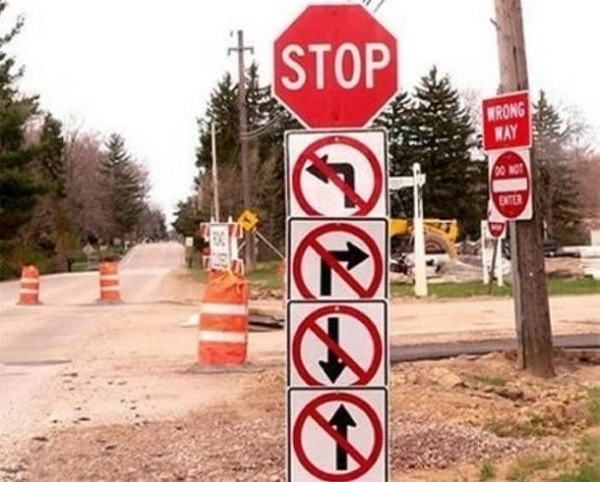 Here we have a most interesting collection of signage. Some low-level civil servant who’s in charge of deciding what the motorist may do at this particular junction has become quite thorough in creating restrictions.

The motorist may not proceed, may not turn left or right, and, most interestingly, in the second sign from the bottom, may not reverse out. In essence, “You’re stuck here and whatever you do to get out, you’re in violation of the rules we’ve placed upon you.”

Of course, if we were to encounter this particular intersection, we might say, “That’s absurd – they can’t possibly hold me to this.”

But, interestingly, under the traffic laws, a policeman can cite us for violating the signage. If we’re lucky, he might agree that it’s absurd and give us a break, but his job is to enforce it, regardless of its absurdity. And if he enjoys his position of authority, as many in his position do, he just may choose to demonstrate his power.

And, if we defy him, we’re in real trouble.

How many laws exist in the US today? The answer is that no one knows. It’s too complex to define. There are roughly 20,000 laws regarding gun control alone – and that’s just the federal laws. State, county and city laws also exist in abundance.

The level of governmental dominance now exists to such a degree that literally everyone is a criminal, whether they know it or not. It’s been estimated that the average American commits about three felonies per day, in addition to many lesser crimes. If, for any reason, the authorities wished to victimize you, they’d find their task quite simple.

Yet, there’s a general assumption amongst those who simply accept the laws that are heaped upon their shoulders, that they were somehow “necessary,” that legislators only pass laws if they have no other choice.

In my estimation, this view is diametrically opposite to what is true. One of my own principles regarding governance is,

“It is the primary business of any government to grow its own power and wealth at the expense of its people.”

This is an important principle to understand, as it opens the mind to recognize that governments always move in a direction of increased control. Given enough time, governments will always create a state of despotism. And, historically, no government has ever reversed its level of control and introduced greater liberty.

It then follows that each country is in the process of becoming increasingly tyrannical. The only difference between them is the degree of tyranny that’s been achieved so far.

Liberty and governmental control are polar opposites. Yet, most people have a rather vague perception of the term “liberty” and might even find it difficult to define. This is unfortunate, as it means that, when liberty is lost, those same people will be unlikely to recognize the fact.

Here are two good working definitions of liberty, courtesy of the dictionary:

“The power or scope to act as one pleases.”

“The state of being free within society from oppressive restrictions imposed by authority on one’s way of life, behavior, or political views.”

The first is interesting, as it suggests that liberty means each person doing exactly as he pleases. Doug Casey often offers a similarly simple, but more refined rule of life:

“Do as thou wilt, but be prepared to accept the consequences.”

The latter dictionary definition is probably in keeping with the perception of most Americans around 1800, but today’s American would caution that, “Ideally, that would be true, but without our current laws and regulations, there’d be chaos.

Libertarians would disagree and offer only two principles that they believe would largely negate the need for laws:

“Do all that you say that you’ll do and don’t initiate aggression against another person or his property.”

And, again, non-libertarian thinkers would shake their heads and assert that this would result in chaos. Americans have become indoctrinated to believe this through slow measures. As Thomas Jefferson said,

“Even under the best forms of Government, those entrusted with power have, in time, and by slow operations, perverted it into tyranny.”

The key to governmental domination is that we tend to tolerate the loss of liberty if it’s taken away slowly.

In the US, liberty has been in decline, by my reckoning, for about one hundred years, but has been in rapid decline since 2001.

Of course, in all countries, at some point, the governmental domination becomes so intolerable that the people rise up. Revolution follows – a period of great upheaval and hardship. Eventually, a recovery begins and the entire process starts over.

It stands to reason that the best place to be is a country that has already recovered and is in the reconstruction stage – a time when liberty is at its greatest.

The US was in this stage in the nineteenth century – a period of great expansion and development.

However, by the mid-twentieth century, the rot had set in. America was past its peak and was ready to begin the final, and most rapid, period of decline.

At that time, the Russian Ayn Rand, living in the US, stated,

“We are fast approaching the stage of the ultimate inversion: the stage where the government is free to do anything it pleases, while the citizens may act only by permission; which is the stage of the darkest periods of human history, the stage of rule by brute force.”

At the time Ms. Rand made this statement, she was largely dismissed. After all, Americans had never seen riot squads, dressed in black and heavily-armed, barging into homes without a warrant.