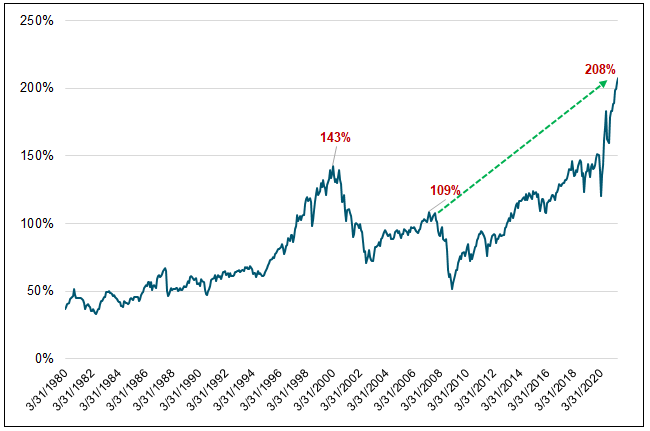 The 7.17% June decline in gold bullion1 was triggered by the “hawkish tilt” expressed at the June 15-16 Federal Open Market Committee (FOMC) meeting. Gold mining shares declined 12.64% during the month.2 We believe the smackdown was a temporary reaction to the perceived change in the Federal Reserve’s (Fed) posture towards possible balance sheet reduction. In our opinion, the investment rationale for precious metals exposure remains unscathed.

In its June statement, the FOMC acknowledged the obvious, that they were behind the curve on recognizing that the post-COVID economic recovery had come sooner and stronger than they had expected. In belatedly admitting the obvious, the Fed knocked investment strategies positioned for inflationary outcomes for a loop. The implied threat that the Fed would act aggressively to curb inflation sooner rather than later was the entire gist of the change in messaging from previous FOMC statements. If the Fed’s intent was to deflate frothy inflationary market expectations, count this shift as a success. However, Fed policy remains highly accommodative. The roots of inflation continue to gain political, economic, and social traction. The Fed, historically inept on matters of timing, will react too late. The constituency for sound money has all but vanished. The dollar debasement thesis remains on track as the subterranean glide path for real interest rates seems locked on autopilot. 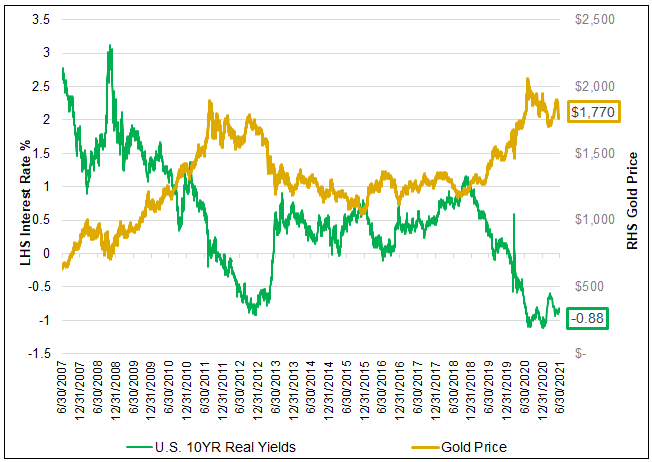 Source: Bloomberg. Data as of 06/30/2021. Real yields are measured by USGGT10Y Index, representing U.S. 10-year TIPs (Treasury Inflation Protected) yields. You cannot invest directly in an index. Past performance is not indicative of future results.

Gold and gold mining stocks are compelling buys. The vast majority of producing miners are generating free cash flow. Current strong earnings are geared to advance at a steep slope should our positive expectation for future gold prices prevail. Valuations, both relative and absolute, are the most attractive in two decades, as illustrated in the table below (compiled by my colleague Paul Wong).

Source: Bloomberg. Data as of 6/30/2021. You cannot invest directly in an index. Past performance is not indicative of future results.

The June selling was almost entirely a knee-jerk synthetic affair driven by algorithmic, headline scanning robotic macro funds. The accumulation and investment in physical gold continues. On June 18, investors bought $630 million of 100% gold-backed GLD shares (SPDR Gold Shares ETF), the largest one-day inflow since January 15, 2021. Central banks bought $6.3 billion of the yellow metal during the second quarter (according to the World Gold Council). Virtually no physical gold was dumped in the rout. What was sold was almost exclusively futures or derivatives. Sales based on macroeconomic speculation require only sufficient balance sheet strength to satisfy counterparties that contracts can be cash settled. Flows in the physical and paper gold markets seem to be headed in opposite directions.

Is a wording tweak enough to derail inflationary forces, or are recent high CPI (consumer price index) readings the beginning of intransigent inflation and not the hoped for transitory variety? In our view, “transitory” is a fig leaf to buy time and ward off financial market concerns related to unprecedented Fed balance sheet expansion. The Fed’s thesis that inflation will wither as the froth of post-COVID reopening activity simmers down seems like an attempt to manipulate markets through thought control.

In our view, inflation will likely prove to be intransigent. Rising wage rates are a key reason. Based on Bureau of Labor (BLS) data, the pace of wage inflation is 4.8%.5 Labor, which accounts for roughly 67% of U.S. GDP (gross domestic product), is ubiquitous. It is embedded in the cost structure of everything. Worker pay is sticky and will not decline because of small increases in interest rates. Even though the rate of change in labor costs may vary year to year, it has never declined absent an economic crisis. Producers and manufacturers must find a way to pass increased labor costs along in order to maintain profit margins and thus inflation spreads.

U.S. import prices climbed more than 11% for the year ended in May 2021 and U.S. exports rose 17.4% in the 12 months (according to BLS). As the reopening surge settles, headline-grabbing price increases in raw materials and intermediate goods are likely to retreat and quite possibly lead to negative year-over-year comparisons in 2022. However, noise-related volatility should not be mistaken for declining inflation.

The recently reported 14.9% year-over-year gain in median housing prices (Case-Shiller U.S. National Home Price NSA Index) captures inflation more accurately than “owner equivalent rent (OER),” a theoretical construct6 of the BLS, which carries a 24%7weighting in official CPI statistics. As shown in Figure 3, the process and formula for calculating OER seem much less credible than the direction of home prices. Higher home purchase prices translate into increased mortgage payments which are not transitory.

Figure 3. The Rather Complex Formula for Calculating OER6 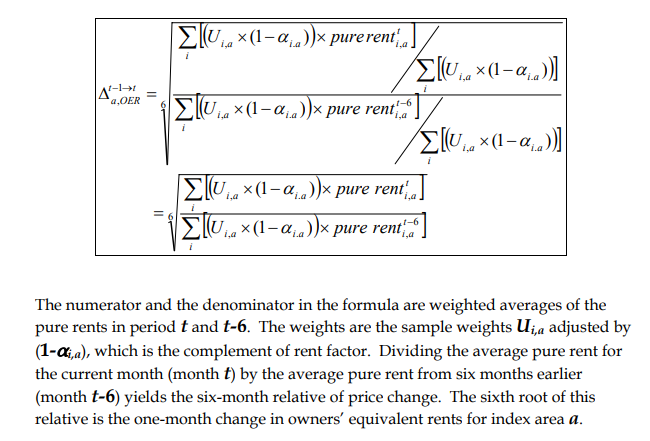 The Stock Market is Overheated

Figure 4. The Buffett Indicator is at an All-Time High
Total Stock Market Capitalization to GDP (2003-2021)

Joseph C. Sternberg explained (The Wall Street Journal, “What Inflation Debates Miss: Inflation,” February 11, 2021): “Inflation in the academic and policy jargon has come to mean a specific event: a rapid run-up in consumer prices.” In Sternberg’s view, the too narrow CPI goalposts do not capture the essence of inflation, including deeply entrenched social, political and psychological aspects. “Malfunctioning price signals [read: inflation] make it impossible for a society to allocate its resources with any rationality or fairness.” Official government readings are blind to the “phenomenal bid-up in prices for financial assets,” which “wreck the value of and income from” the savings of investors.