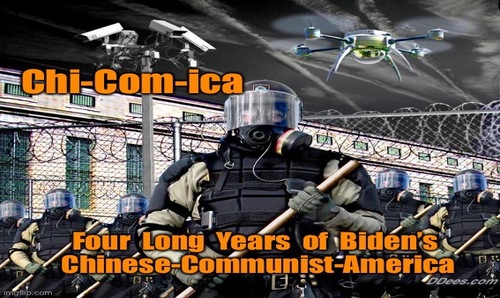 It now has become clear that within the January 6 “Stop the Steal Rally,” there were actual FBI agents and informants of the Deep State that not only participated but led and encouraged the masses on that day. FBI agents did not just watch and observe, they encouraged and led Trump supporters. Therefore the FBI agents “set up” the Trump supporters on J-6. Entrapment.”

In the June18th ANP story “A Deeper Analysis Of The Government’s Involvement In The Events Of January 6th, Taking Into Account Their Historical And Systematic Abuses Of The Rights Of All Americans” we took a look at some of what was behind the January Sixth battle of the “Biden” regimes launch of their full out war on We, the People of the United States of America. Today I go a bit further, with more background of the primary weapon used in this attack, the FBI.

In the first quote above, the opening paragraph comes from the July 23rd American Thinker story “’There’s Something Happening Here…’” which line is taken from the Buffalo Springfield song “For What It’s Worth” from 1967, a time when commotion in our society was seemingly at a max. As American Thinker author Andrew W. Coy mentions, “Many patriots are now thinking “There’s Something Happening Here,” but are just not clear on what it is, what is coming, and what the results will be. There is an undercurrent going on that is felt but not seen at this time …. There is a real sense of physical threat by the progressive government against the people. And there is a real arrogance by the powerful government elite that the populist masses, including the patriots, just cannot do anything about progressive abuse of power. A real sense of estrangement, isolation, and unfairness that the outsiders felt in the ’60s, is what the patriots (conservatives/Christians/constitutionalists) feel today.”

I am in complete agreement with this, as I and so many that I know also feel this very strongly. There is a sense of evil, a sense of foreboding in the general atmosphere of the current world going on right now, that it is palpable and strangely familiar at the same time. I hope to give some insight on this that was not included in the first story a month ago.

There are so many things going on at the same time right now, like the proof that the election was stolen, that the so-called covid “pandemic” is a total farce to get people to become injected with the real Bio-Weapon, the so called Kill Shot, the mass invasion by foreign military aged men over our Southern Border, being facilitated by the U.S. Air Force along with the CIA and other government agencies (at least partially as cover for child trafficking for all kinds of nefarious purposes along with massive drug importations on those same jetliner flights), and all of the other assaults on our Liberty and Republic we are hearing about.

To continue the American Thinker quotes, “There is a feeling, there is a tension, there is an electricity in the air that something is up. There is a feeling that a great deal is happening below the surface for which we can’t see, but can feel. To paraphrase Stephen Stills in his 1966 song classic; there is something happening here in America today, what it is I’m not clear. There is a government with guns and jails over there. And millions of citizens with guns and ammo over here. (Biden is the one who brought up civil war, Biden) Everybody needs to stop and look around to see what’s going down. The “battle lines are being drawn” and “step out of line, the men come and take you away.” ….. As human nature and the lust for complete power does not change, history thus repeats itself, again and again. What is happening now, we’re just not clear. But be sure to look around, because most assuredly, something is happening now.” 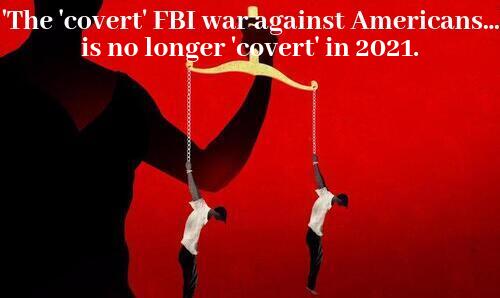 In October of 2010, RT (Russia Today) published an article speaking of “Covert FBI war against Americans leaves dark memories“ that covered the US Government targeting American groups like the Black Panther Party, CPUSA (Communist Party of the USA, now officially part of the DNC), the KKK, Socialist Workers Party, SDS, and many other groups and individuals. One quote I believe is important to set out is this one – “Mujahid (Naji Mujahid) said “the United States Government doesn’t recognize having any political prisoners.”

In 1978, the US ambassador to the United Nations Andrew Young told a news reporter “there are hundreds, perhaps thousands, of people whom I would call political prisoners.”

“Before there were the WikiLeak papers or the Pentagon papers, there were the COINTEL-PRO papers. In the early 1970’s, activists broke into the FBI’s field office in Pennsylvania and stole thousands of documents pertaining to the FBI’s program. Almost immediately, a scandal exploded. Top officials from the FBI’s national bureau in Washington DC were summoned to Capitol Hill for a congressional investigation that exposed the FBI’s covert war against political dissidents in the United States.

That investigation was known as the Church Committee, it found that “Many of the techniques used would be intolerable in a democratic society even if all of the targets had been involved in violent activity, but COINTEL-PRO went far beyond that…the Bureau conducted a sophisticated vigilante operation aimed squarely at preventing the exercise of First Amendment rights of speech and association.””

There is much good information in that article, but we should now look at just what the term “COINTEL-PRO” refers to. From the FBI records vaults, they say that “The FBI began COINTELPRO—short for Counterintelligence Program—in 1956 to disrupt the activities of the Communist Party of the United States. In the 1960s, it was expanded to include a number of other domestic groups, such as the Ku Klux Klan, the Socialist Workers Party, and the Black Panther Party. All COINTELPRO operations were ended in 1971.”

The Nation of Islam, itself an enemy of the USA, called it “COINTELPRO (an acronym for Counter Intelligence Program) was the official name of the programmatic project conducted by the United States Federal Bureau of Investigation (FBI) under state-sponsored terrorist J. Edgar Hoover. It’s stated aim was the spying on, infiltrating, discrediting, disrupting and destruction of domestic organizations and individuals it considered “subversive””