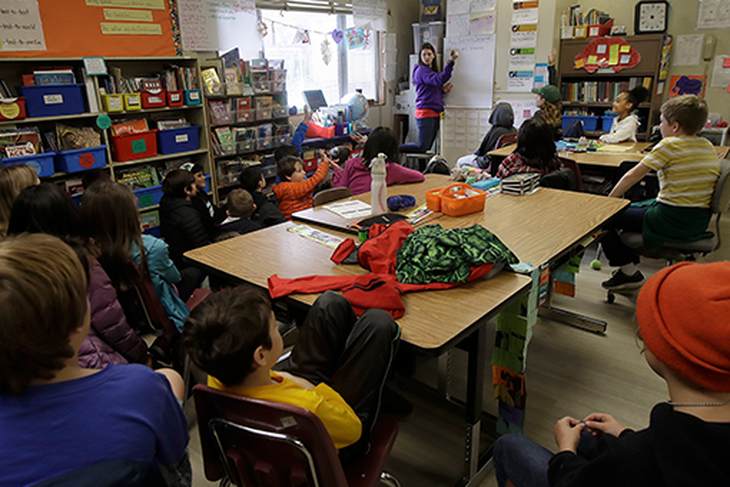 The battle over curriculum using critical theories in the K-12 classroom is raging nationwide. Legislatures have taken up the issue in some states, either mandating or prohibiting these curriculums. While state legislatures have broad powers in defining school curriculum, there is a robust debate about whether the laws prohibiting the teaching of these ideas are wise. Videos of contentious school board meetings on the local level are going viral.

However, discussions often ignore one important group. In between the state education department and the local school district is a layer of non-profits. While you may be familiar with accreditation for colleges and specific types of degree programs, certain organizations provide accreditation at the K-12 level in about 20 states. This additional layer of oversight is becoming a burden for parents in Georgia school districts who deal with activist school board members pushing curriculum based on critical theories.

While accreditation is voluntary in Georgia, the lottery-funded HOPE scholarship requires graduation from an accredited high school. The HOPE is unique because it rewards student performance and parents and students widely use it. Some colleges require accreditation, and some rely on other factors.

The largest two of these organizations used to be known as AdvanceED and Measured Progress. The businesses merged into a new company, Cognia. In a complex timeline of predecessor firms, the new company Cognia has been around for 125 years. As Free to Learn pointed out in a new national ad campaign, America ranks 22 in math, reading, and science globally, behind countries such as China and a slew of former Soviet states.

Although Cognia aims to ensure education quality, it seems the organization has not been doing such a great job in recent decades, perhaps because it takes a “holistic” approach with a commitment to “diversity, equity, and inclusion.” Right now, the organization is inserting itself into an increasingly political fight between the school board members in Cobb County, Georgia.

Cobb County School District has traditionally been one of the top-performing districts in the state. People relocated there to take advantage of high-quality schools. Now the school board is locked in a political battle with a newly-elected Democrat minority pushing politicized content like critical theories in the classroom. Dr. Jaha Howard is one of the new members and posts content like this to his official school board page:

While the meme is bad enough in a racially-diverse district, Howard’s comments on the thread are even worse. Howard tends to filter out replies criticizing him and he responds like this to one parent who happens to be white:

How do you explain water to a fish?

For your consideration: the existence of a thing does not revolve around your ability to accept or understand that thing. Plenty of people understand it all too well. It takes a posture of humility and not a posture of defense.

I don’t have the time, nor the energy, to explain all this to you. Consider spending some time with books like “Caste” by Wilkerson or “New Jim Crow” by Alexander. Maybe then, we can discuss with clear definitions and terms.

Howard is one of the three school board members who requested an interim review from Cognia, despite the fact that Cobb County received its scheduled assessment and accreditation less than two years ago. Two other board members, Charisse Davis and Leroy “Tre” Hutchins, also signed the letter to Cognia. The letter presents political complaints, such as a request for third-party assistance with board meetings because these members are not getting their way and their preferred items are not coming up on meeting agendas.

Cognia gave notice of an interim review, citing 50 additional complaints from parents. The company refuses to provide these further complaints in any format to the school district or the media, in a school district of 107,000 families when the entire conflict on the board has been very well-publicized. Even if they are all supportive of Howard and the other members, 50 letters seem like a pretty thin pretext for an interim review.

Or it could be because Cognia and its president and CEO, Mark Elgart, Ed.D., clearly fall on one side of the debate over critical theories. Here is Elgart’s statement on “diversity, equity, and inclusion,” the code words for the discussion raging nationwide:

Elgart apparently believes we all don’t understand that equity means equal outcomes, not equal opportunities. Thankfully, this controversy is putting the entire Georgia accreditation system for K-12 in the spotlight. Cognia is a fairly closed-door organization and, to date, its CEO has not granted an interview on the situation. As a recent editorial in the Marietta Daily Journal pointed out:

Cognia, the company who decides if your child’s school is up to snuff, has a business model that’s tough to beat: A non-governmental organization supported by government funding. Put another way, Cognia lives off the taxpayers’ teat, but is accountable to no one. Not bad work if you can get it.

The Atlanta Journal-Constitution (AJC) notes that lawmakers are frustrated with the situation in Cobb County and are considering legislation to increase competition in accreditation. The state legislature and Governor Brian Kemp should consider scrapping the requirement altogether and encouraging universities within the state to do the same. Cobb County alone paid $133,200 of taxpayer money annually for the school district’s membership in Cognia.

Georgia schools participate in standardized testing. School boards are accountable to residents at the ballot box. Market forces require that the state and local boards ensure an education for our children that provides them the skills and knowledge necessary to continue to grow our economy. As a state and as individual counties, we compete for business opportunities and every business considers the quality of education in their assessment.

Georgia parents and educators can and should work together to provide an outstanding education for our children. Parents should demand other states that require accreditation for any educational benefit follow suit. Organizations like Cognia represent an additional institution subject to capture by the radical Left that can punish districts that do not accept their standards. It is time to end accreditation in K-12.