So who’s Bella Poarch and where does she come from? The answer is simple: TikTok.

Indeed, Bella Poarch’s immense popularity is a direct result of the immense popularity of TikTok, the favorite video-sharing platform of children and teenagers across the world. Other than acting as a massive data collection operation for its Chinese mother company ByteDance, TikTok is currently shaping youth culture in ways we still cannot completely fathom.

For instance, there are growing concerns regarding the TikTok to OnlyFans pipeline, where influential TikTokers “graduate” to OnlyFans and generate revenues by posting explicit content.

But there’s also another, much more exclusive pipeline that is reserved for the most popular TikTokers: The TikTok to entertainment industry pipeline. Bella Poarch went through that pipeline and emerged a true industry slave.

Like many TikTok stars, Bella Poarch became famous by posting videos of her lip-synching to various songs, performing dance moves, and catering to the needs of thirsty boys by wearing revealing cosplay outfits. She is mostly known for creating M to the B – the most liked TikTok of all time with 50 million likes. 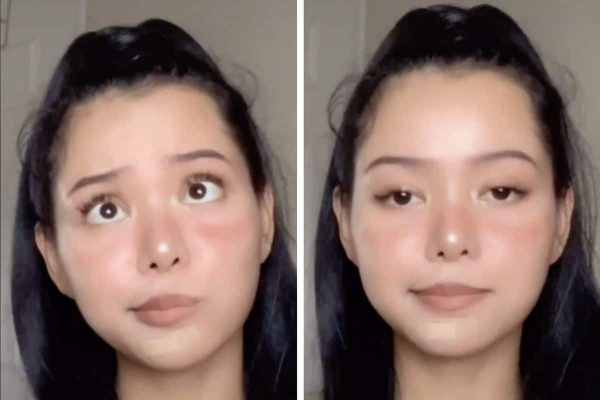 Screenshots from the most popular TikTok ever. I don’t get it.

Following the insane virality of this TikTok (which might have been helped by the app’s enigmatic algorithm), Poarch became the fourth most popular TikToker with over 73 million followers.

Of course, record execs saw these figures and salivated abundantly.

So in May 2021, Poarch signed a music deal with Warner Records. Immediately after, everything relating to Bella Poarch became drenched in the symbolism of the occult elite.

For instance, here’s the cover art of Build a B*tch. 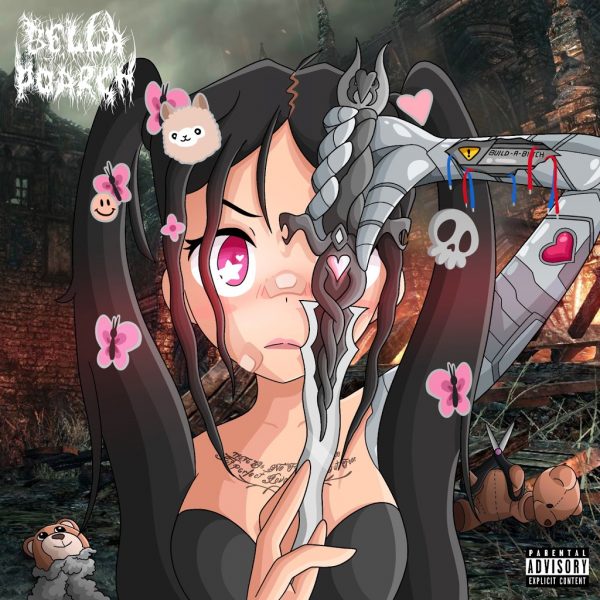 The cover art of Build a B*tch.

If you’ve read other articles on this site, you surely recognize a whole lot of symbols in this cover art. This image basically says: “Bella Poarch is now officially an industry pawn. We own her. Her career is now entirely dedicated to pushing our agenda to her young fans”.

First, the character hides one eye using a dagger, effectively forming a very obvious one-eye sign. I could stop the article right here because that sign sums up everything Bella is now about. But there’s so much more.

The cover art is also filled with symbolism that relates to the dark world of MKULTRA, more specifically Monarch programming. First, there’s a bunch of butterflies in her hair – one of the main symbols representing Monarch programming (monarch is a type of butterfly). Also, there are decapitated teddy bears around her – a classic MK symbolic representing the loss of innocence of child slaves. In MK programming, teddy bears are given to slaves to form a bond. Then, they are confiscated and/or destroyed by the handlers to cause trauma.

The character also has a robotic arm on which is written “Build-a-B*tch”. MK slaves are often portrayed as robots or androids that are programmed to perform specific tasks. 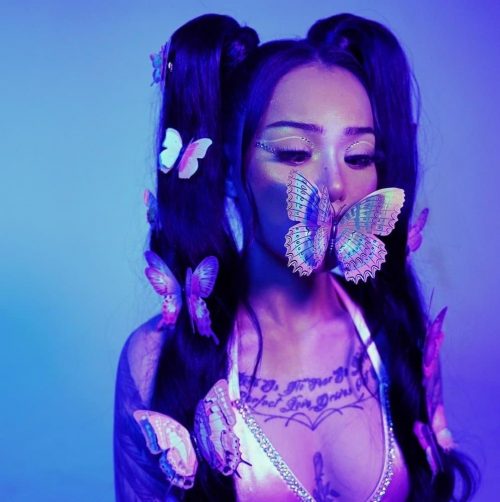 An MK-themed photoshoot. Butterfly over the mouth = The silence and powerlessness of MK slaves.

In short, this cover art fully represents the insidiousness of Bella Poarch marketing: In order to cater to her young fans, the art is cartoony and colorful. However, the symbolism portrays Bella as a victim of trauma-based mind control.

The video of Build a B*tch conveys the exact message.

The song Build a B*tch is a carefully calculated piece of elite indoctrination. In order to cater to her young fans, the song has a catchy melody that actually sounds children’s song. However, the lyrics – combined with the visuals of the video – communicate lots of elite-sponsored messages and symbols.

Like countless other pop songs that were released in the past years, Build a B*tch has a pseudo-feminist, “empowering” message. This is the hook:

However, as the tagline of this site says: Symbols rule the world. Not words. Despite the words of the song, the visuals of the video confirm that this IS build-a-b*tch. In fact, we see Bella literally being assembled in a factory – a perfect metaphor to illustrate the creation of an MK slave by the occult elite.