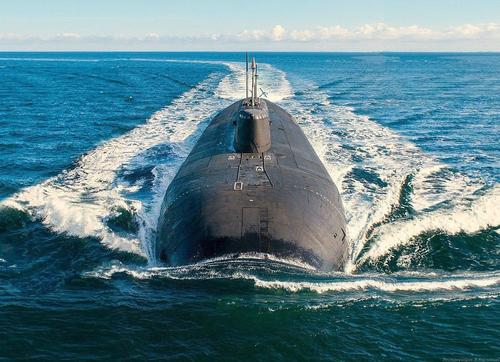 It’s being popularly dubbed “Putin’s city-killer” – and is also being widely acknowledged as the largest submarine in the world to be built for 30 years: Russian Navy’s ‘Special Mission’ K-329 Belgorod has been put to see for the first time within the past days, undergoing sea trials.

Estimated at 178 meters (584 feet) long and about 15 meters (49 feet) across, it’s twice the size of the UK Royal Navy’s largest submarines, but more impressively is equipped with AI-guided nuclear tipped underwater drones which according to one prominent Western source are capable of hitting coastal targets lying 6,000 miles away.

The Belgorod has been known about and teased by the Kremlin for years, but is now being hailed in Russian media as a “game changer”.

One military expert with the Royal United Services Institute (RUSI), Dr. Sidharth Kaushal, explained to The Mail on Sunday:

“The Belgorod is large enough to act as a mother ship for a unique set of smaller vessels which have deep-diving capabilities and the ability to tamper with undersea infrastructure.

It’s well equipped for sabotage and clandestine operations. Its Poseidon nuclear torpedoes could also be a very effective means of attacking an aircraft carrier in wartime – one against which at present no defense exists.”

It was designed with the advanced Poiseidon torpedoes in mind as part of Russia’s broader nuclear deterrence arsenal.

Here’s more on why the gigantic Belgorod poses a major challenge for US and other Western attempts to classify and thus understand the vessel from a separate naval analysis source:

Belgorod it’s intended purpose presents Western analysts with an enigma. She will combine two seemingly contradictory roles. The first is as a host submarine (read ‘mothership’) for deep diving nuclear powered midget submarines. These are capable of working on cables and other objects on the sea floor. The concern in NATO is that these could include the undersea internet cables connecting Western countries. This is termed a ‘special mission’ in navy parlance (which is full of euphemisms for covert activities).

The second role is one of nuclear strike and deterrence. For this she will be armed with six ‘2м39′ Poseidon torpedoes. These are a whole new category of weapon not fielded by any another navy. They have been described as ‘Intercontinental Nuclear-Powered Nuclear-Armed Autonomous Torpedoes’.

Each of these AI-driven torpedoes are themselves over 20 meters long, and at least according to Russian military claims have a practically unlimited range in terms of what they could reach across entire oceans.

The timing of the submarine’s sea trial launch days ago is also a “propaganda victory” of sorts given last week’s dangerous Black Sea warning shots incident off Crimea involving Russia chasing away from its waters the UK’s HMS Defender.

British defense officials within days after the incident expressed “surprise” at how rapidly things escalated, given it seems they didn’t expected Russia to that quickly initiate live fire warnings.