by Eva Fu, The Epoch Times: 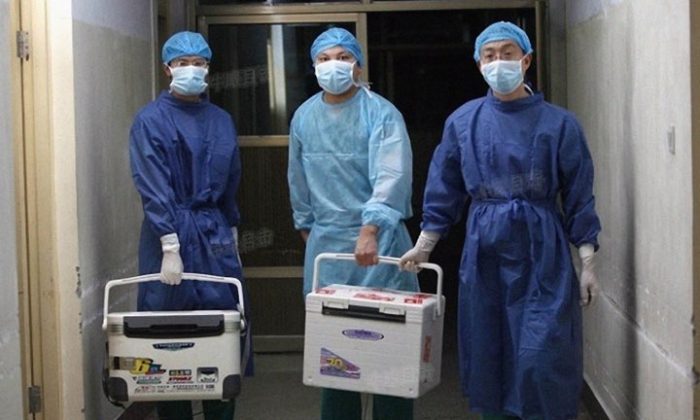 At the sound of gunshots, prisoners fell lifeless to the ground. Their bodies, still warm, were carried to a nearby white van where two white-clad doctors awaited. Behind closed doors, they were cut open, the organs carved out for sale on the transplant market.

The grisly scene, which sounds more like the plot of a horror movie, took place in China more than 20 years ago at the direction of state authorities. It was witnessed by Bob (pseudonym), then a police officer who provided security at the execution sites where death-row prisoners were executed.

“The harvesting of death-row prisoners’ organs was an open secret,” Bob, a former public security officer from central China’s Zhengzhou City who is now based in the United States, told The Epoch Times in an interview.

Bob described being an unwitting participant in an “industrialized” supply chain that converted living humans into products for sale in the organ trade. The players in this macabre industry include the judicial system, police, prisons, doctors, and the Chinese Communist Party (CCP) officials who issue the directive.

The former officer used a pseudonym in sharing his experience to protect his safety. The Epoch Times has verified his police ID and other personal information.

His account from the mid-1990s sheds light on one stage in the disturbing evolution of the CCP’s long-running practice of harvesting organs from non-consenting donors. While Bob witnessed organ extraction from prisoners who were already dead, in the following years the regime would go on to implement—and deploy on a mass scale—a practice far more sinister: harvesting organs from live prisoners of conscience, particularly Falun Gong practitioners.

Bob joined the police force in 1996 and worked as a civilian police officer. From time to time, he assisted in maintaining order at a court where executions are confirmed and various execution sites in the city. Later, in 1999, as a result of an online post critical of the authorities, Bob himself was put in detention for more than a year. Inside, he was able to observe the handling of death-row prisoners,, and thus piece together the process from conviction to execution to organ harvesting.

After being sentenced to death, an inmate would be slapped in hand and ankle cuffs, the latter weighing up to 33 pounds to prevent a possible escape. One or two other prisoners would keep them on watch at all times. A blood test—a step to identify possible donors—and a check up on their mental and physical health would also run during this time at a dedicated medical room in the detention center.

“As far as I know, no one told the death-row prisoners their organs would be extracted,” Bob said.

Executions typically occurred ahead of major holidays, he said.

Death-row prisoners would have to attend a public hearing at a higher court, where a judge would confirm or overturn the death sentence assigned by the original court.

Those destined for execution—ranging from a handful to more than a dozen each time—were then marched out of the courthouse to a procession of 20 to 30 vehicles waiting outside, according to Bob. The convoy also transferred local officials assigned to witness the executions. They included the vice director from the local public security bureau, the judge, and other personnel who handled the cases.

All the cars had red cloth or paper taped over the windows and carried a numerical marking.

The prisoners determined to be suitable to have their organs extracted (as a result of the tests) would get injected with a drug said to relieve their pain. Its actual goal, though, was to prevent blood to coagulate after brain death and damage the organs, Bob said.

Those slated for organ harvesting were typically young, healthy men, usually in their 20s and 30s without a history of major illness, according to Bob.

At the execution site, prisoners were arranged in a line to be shot in the back of the head.

The closest convict would stand roughly three to five meters (3.3 to 5.5 yards) away from Bob.

After the shootings, an on-site medical examiner would check the bodies to confirm death. After this, a black plastic bag would be used to cover the prisoners’ heads. The bodies slated for organ extraction were then rushed to a white van waiting nearby. The van’s rear door was usually kept shut, and its window curtains were pulled down to keep out prying eyes.

Bob once caught a glimpse inside when the rear door chanced to be open. He saw an operating bed and two doctors donning a white gown, masks, and gloves. Plastic wrapping covered the ground in case of blood spills. The doctors swiftly closed the doors after realizing someone was watching.

No one but the doctors would know what happened afterward. When the bodies came out, they were in a black cadaver bag and sent directly for cremation.

The dead convicts were lumped together and burned in one kiln. As a result, it was impossible to distinguish which ashes belonged to who, Bob said. “They simply grabbed some from the heap, and gave it to each family.”