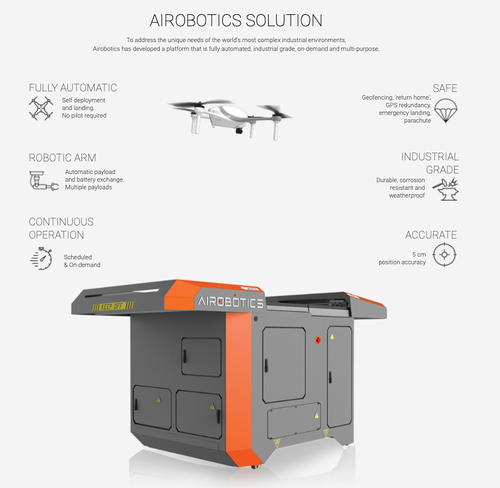 Police in Dubai will use quadcopter technology to reduce emergency response time anywhere in the city to help increase security.

Dubai’s ruler Sheikh Mohammed bin Rashid Al Maktoum tapped Israeli drone company Airobotics for their “Drone Box” platform to help police respond within one minute — instead of 4 minutes 40 seconds to incidents anywhere in the metro area, according to the Government of Dubai.

Airobotics’ website offers some insight into the durability of the new drone.

During my visit to the Dubai Police Headquarters, we launched Drone Box, a platform to dispatch drones across Dubai to reduce response time to criminal and traffic reports from 4.4 minutes to 1 minute. The service will officially launch during Expo 2020 Dubai. pic.twitter.com/jz1niTk7sl

The Drone Box replaces security personnel with a fast and efficient autonomous drone fleet deployed across the metro at a low cost.

Sheikh Mohammed bin Rashid Al Maktoum was also briefed on the “progress of the Oyoon project, an artificial intelligence (AI) program implemented to raise Dubai’s profile as one of the world’s safest cities.”

Dubai Police continue to invest in a surveillance state with more than 300,000 security cameras monitoring the metro area around the clock.