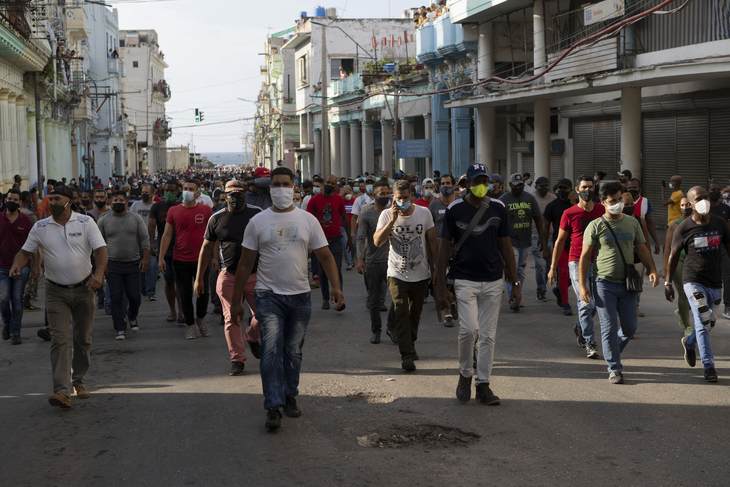 The Biden State Department apparently has been taking its cues from The New York Times, which claimed that Cubans were shouting “freedom” and “other anti-government slogans,” but administration officials are taking it even further … and dumber.

Acting Assistant Secretary for the U.S. Department of State’s Bureau of Western Hemisphere Affairs – try putting that on a business card – Julie Chung chimed in with a tweet about how Cubans are taking to the streets in “peaceful protests” while exercising “their right to peaceful assembly” over COVID.

Peaceful protests are growing in #Cuba as the Cuban people exercise their right to peaceful assembly to express concern about rising COVID cases/deaths & medicine shortages. We commend the numerous efforts of the Cuban people mobilizing donations to help neighbors in need.

Peaceful protests are growing in #Cuba as the Cuban people exercise their right to peaceful assembly to express concern about rising COVID cases/deaths & medicine shortages. We commend the numerous efforts of the Cuban people mobilizing donations to help neighbors in need.

It’s hard to know where to begin, but that lady with the huge title on her business card apparently doesn’t realize that swarms of people are on the streets are, in fact, there because they don’t have a First Amendment “right to peaceful assembly” and redress grievances.

Cuba doesn’t have a First Amendment because it’s run by tyrannical commies who don’t like the free exchange of ideas, you know, like Facebook, Google, Canada, the Left, Joe Biden, and Kamala Harris.

Congress shall make no law respecting an establishment of religion, or prohibiting the free exercise thereof; or abridging the freedom of speech, or of the press; or the right of the people peaceably to assemble, and to petition the Government for a redress of grievances.

It’s adorable that the grown-up woman who works for the State Department doesn’t know that.

Not only does she get the country wrong, but she also gets the words wrong.  Julie, it’s “peaceably assemble.”

Considering that protesters are overturning police cars while yelling “Down with Communism!” and the regime’s police are beating the protesters, neither word appears to apply, either.

And redressing grievances is out, El Jefe is busy.

But the Biden administration believes that the beatings will continue until Cuban COVID goes away or something. Which brings us to the world’s most fantastical health care system.

We were assured by none other than that great arbiter of health care, the man who singularly embodies the essence of health care, Michael Moore, that Cuba’s health care system is the best in the world.