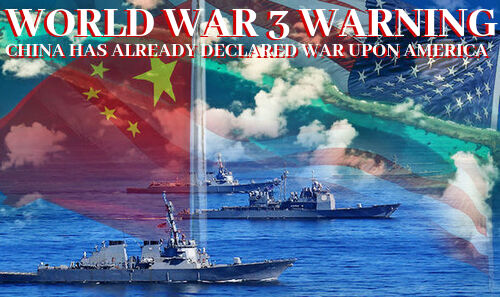 China’s war against America has already started; however, the bombs have not been released— yet; but the Chinese Communist Party (CCP) is serious and has plans to conquer America. World domination has been their vision for almost a hundred years and still is as the CCP celebrates its 100th anniversary this month. Last Thursday, Communist Butcher-in-chief Xi Jinping promised to bash any nation that threatened China’s sovereignty or threatened reunification with Taiwan.

What will Biden do when China takes Taiwan? According to his emails, Hunter Biden has had a longtime lucrative business relationship with the commies. (Been a long time since you’ve read that word.)

Fools, simpletons, and traitors ridicule the possibility of war and suggest such talk is divisive, dangerous, and destructive to a happy, cooperative, and safe society. They are wrong. China entered the 21st century as a benevolent giant trying to get along with everyone, so we are told. China makes its own people get along—or else.

China has been hesitant to be more aggressive with America because she is winning and doesn’t see a reason to hit the release button yet.

Scholars tell us that there has always been a China as long as man has “walked upright.” Extremely resilient, the Chinese survived centuries of numerous kingdoms, dynasties, warlords, military incursions, civil wars, floods, typhoons, and earthquakes. For example, the deadliest earthquake on record in 1556, in Shaanxi, China, killed 830,000 people and caused up to 66-feet-deep crevices. A 520-mile wide area was destroyed.

Millions of uneducated Chinese survived the climate catastrophes, internecine struggles, local warlords, and external attacks by developing small-scale industries. They produced silk, paper, gunpowder, and cotton that was traded for food while others farmed, trading food for shoes, tools, and other necessary items.

Millions were not successful in survival, thus making China a massive sepulcher.

China has attacked, absorbed, or acquired smaller groups and some massive groups of people and now shares international borders with 14 sovereign states such as India, Mongolia, Afghanistan, North Korea, Russia, Pakistan, etc. Over 1500 years, the reclusive nation built a 13,000-mile wall to protect it from foreign infiltration along its northern border from nomadic Mongolian tribes on horseback. Walls are known to stop cavalry attacks as well as most illegal immigrants. Additionally, the wall helped keep the natives down on the farm.

China’s first dynasty started in 2100 B.C., and the last dynasty ended in 1912, becoming the Republic of China. After many years of civil unrest and rebellion followed by WW II, the People’s Republic of China was birthed in 1949 after a bloody multi-year struggle with freedom-loving nationalists.

Chairman Mao Zedong led the CCP with an iron fist, and Chiang Kai-shek, leader of the opposing Nationalist Party, challenged the Chinese people for their loyalty. Chiang was born into a devoted Buddhist family but trusted Christ and was baptized in a Methodist Church in 1930. Finally, when Mao took control of the bleeding nation, Chiang absconded with about 2,000,000 followers (and the treasury) to the island of Formosa (now Taiwan) and established a Provisional Government.

Since then, China considers Taiwan a part of China, but Taiwan considers itself a sovereign nation. Even some U.S. “friends” refuse to call Taiwan a nation because it angers mainland China’s Communist tyrants. Nevertheless, America has promised to support Taiwan, and therein are the sprouting seeds of WW III. 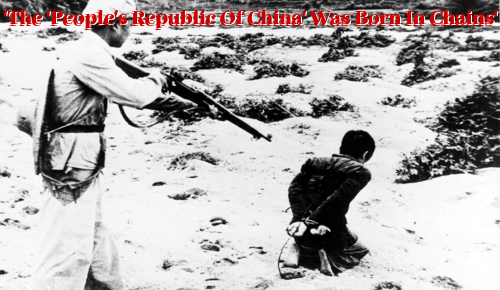 Following WW II and the bloody struggle with the Nationalists, even a thuggish Communist like Mao knew the new nation was in trouble, so he kicked off the Great Leap Forward, hoping to change the rural agricultural society into an industrial one. His first mistake (other than taking the Communist oath) was to force simple farmers to set up “backyard steel furnaces” and meet strict production quotas; however, their steel production was a farce, failure, and fatal. The backyard steel was so brittle that it was useless.

Sure, it was stupid but remember, Mao was a Communist. The Great Leap Forward became a disastrous Fallback into Famine, resulting in the deaths of 56 million Chinese. Three million were suicides.

Chinese Communism differs from the old Soviet Communism, with the Chinese model adjusted from Marx to create state-controlled capitalism. Mao decided Marx was wrong because some capitalism (if controlled by the state) would be desirable. It might help the peasants think they are free even though the CCP owns a piece of everything. Chinese officials believe the “fat of the land” should be shared with the state. At one time, the power of the state was wielded behind the scenes; now, “the power would also be exercised explicitly.”

The CCP leaders admit the cooperative effort of the state with individuals is working. Everyone is happy, except those struggling to survive in the very rural hinterland. However, the residents of Hong Kong, Christians in the underground church, and assorted dissents are not thrilled with the repression of the CCP.

According to the Black Book of Communism, Communist policies in China have killed more than 65 million of its own people since its beginning in 1949. Plus, millions more died in its civil war, the Korean War, and in Tibet. Moreover, in recent years, China has harvested the organs of thousands of its prisoners, proving China is a horrific house of horrors.

China used to be our friend. Now, it is our enemy, along with Iran, Cuba, Russia, etc. The Soviet Union maneuvered China into its Communist orbit with the help of American traitors in our government in the 1940s. It is noteworthy that Senator Joseph McCarthy was not the first U.S. politician to warn about spies and the loss of China. A young Congressman from Massachusetts raised his voice a year before McCarthy.

The young Congressman sounded a clear, correct, and courageous voice because of the tragic loss of China. He placed a significant part of the blame on “a sick Roosevelt,” General George Marshall, and “our diplomats and their advisors, the Lattimores and the Fairbanks.” He concluded, “This is the tragic story of China whose freedom we once fought to preserve. What our young men had saved, our diplomats and our President have frittered away.” That Congressman was John F. Kennedy.

Kennedy was right and wrong. He was right that FDR was sick, but he was also soft on Communism and had Soviet agents whispering in his ear what they had heard from Stalin’s henchmen.