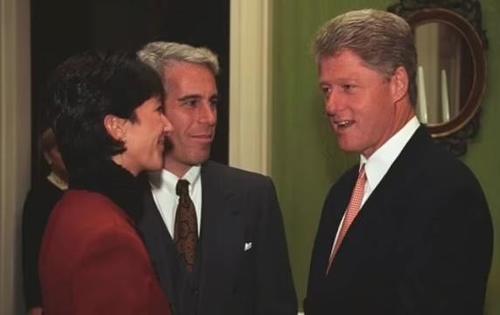 As the world awaits the trial of Jeffrey Epstein ‘madame’ Ghislaine Maxwell, the Daily Mail reported Friday – citing information revealed in a forthcoming podcast – that President Bill Clinton flew on Epstein’s “Lolita Express” (the private jet belonging to the deceased billionaire and convicted pedophile) during a trip to Taiwan, Japan and China. At some point during the trip, Clinton and Ghislaine were joined by billionaire Ted Waitt.

During the trip, Clinton and Maxwell met various foreign dignitaries, and even promised a small donation to help combat AIDS in China.

Additionally, Clinton and Maxwell took a trip together on a private jet owned by billionaire Ron Burkle during a trip to India in November 2003. Journalist Vicki Ward – who revealed the new details in her podcast “Chasing Ghislaine” – reported that Maxwell was part of the official Clinton entourage and even shared the same hotel with the ex-president.

This latter trip with Burkle was part of Clinton’s work with the Clinton Foundation, his philanthropic initiative, to lower the cost of AIDS drugs.

Maxwell used Clinton as an “escape” from Epstein, a badly needed break to get away from the ‘toxicity’ of recruiting underage women to be abused by Epstein. Maxwell was invited on the trip for one simple reason: she was seen as a critical go-between for the Clinton Foundation as it solicited millions in donations from Epstein.

Maxwell was considered by Clinton’s personal staff to be ‘just as important’ as Epstein for raising money for the Clinton Foundation and was the ‘go-to person’ when it came to asking for donations from the pedophile.

Ward claims in the podcast: “I’ve also only recently learned from sources close to Bill Clinton that he and his post-presidency staff considered Ghislaine to be just as important as Jeffrey – if not more so.”

Ward’s reporting places a new, and uncomfortable (for the Clintons), spotlight on the relationship between Clinton, Epstein and Maxwell.

Flight logs show Clinton took at least 26 trips aboard the ‘Lolita Express’ – even apparently ditching his Secret Service detail for at least five of these flights between 2001 and 2003. The former president was closest to Epstein during the early 2000s, just after his presidency had ended, which also coincided with the period where Epstein was running his original sex-trafficking ring in West Palm Beach.

Of course, Clinton has denied any involvement in and/or knowledge of Epstein’s criminal activities. He also denies reports that he ever visited Epstein’s private island.

According to Ward, Maxwell “used” the former president as she attempted (and failed) to make a permanent break from her relationship with Epstein.