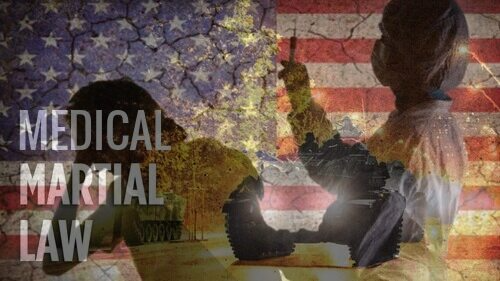 While more and more proof keeps emerging that ‘Covid’ was a long-planned globalist operation to usher in a ‘new world order’, further enslave the free people of America and allow mass mail-in voting fraud across the country to ‘install’ Joe Biden as US president, this new story over at MedicalXPress reports there is growing pressure in place across the planet to make ‘the jab‘ mandatory, putting pressure on so-called ‘anti-vaxxers’ worldwide.

Reporting within that story that a growing number of countries and territories around the world are forcing people to be vaccinated against COVID-19, yup, against their wishes, the leftists favorite phrase while they’ve been murdering their own unborn babies the past several decades, ‘my body, my choice’, is about to take a whole new meaning in America.

As Christopher Langan, called ‘the smartest man in the world’ by the mainstream media, recently warned, should such a moment in time as forced vaccinations arrive in America:

“It’s easy to see where this leads, and it’s nowhere good. Personally, I’m willing if necessary to do severe physical harm to anyone attempting to force one of these injections on me, and the same should be true of any other decent self-respecting person.”

And with this new story over at Mediaite reporting that according to CNN, most of the latest new cases of Covid are happening in Trump-voting states, while Biden-voting states are seeing few new cases, it’s now easy to see how the globalists are setting this all up to help usher in their end game for America.

As this new story at the Daily Mail reports, Joe Biden will be calling upon Americans to ‘go door to door’ across the country, urging their fellow Americans to ‘take the jab’, so can you imagine where this is heading as the globalists get desperate to inoculate everybody, but the masses say ‘no’? And just imagine ‘Biden’s jabbers’ going door to door in the near future, would you talk with them if they ‘come a knocking’? We’d be sure to speak very briefly to drive home the message ‘our bodies, our choice’ but if they then refused to leave, we’d feed them to Hootie. If anyone does decide to visit your homes imploring you to get ‘the jab‘, PLEASE get videos of the interactions! With ‘Biden’s jabbers’ unleashed upon America, should be a lot of ‘video gold‘ out there in the near future!

With the globalists long pushing their satanic ‘depopulation agenda’ that seeks to cull the world’s population, whittling it down to 500 million people in due time as expressed on the mysterious Georgia Guidestones, Americans continue to serve their families and loved ones best by arming up and ‘preparing for bear‘ in the days ahead with what looks more and more every day like tyranny encroaching as warned by Congresswoman Marjorie Taylor Greene who claims these ‘Biden jabbers‘ remind many of ‘medical brown shirts‘, pushing America ever closer to ‘medical martial law’. 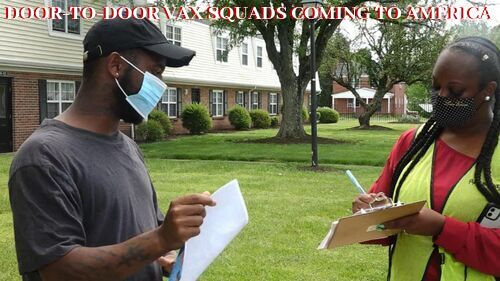 “One who uses coercion is guilty of deliberate violence. Coercion is inhuman.” ~Mahatma Gandhi

In this new story over at the NOQ Report titled “The Real Reason They’re Pushing Vaccines So Hard is Both Ludicrous and Terrifying”, they warn: one doesn’t have to be an ‘anti-vaxxer’ or ‘conspiracy theorist’ to apply logic to this whole scenario and realize things aren’t as they seem. From that story before we continue.:

When writing an opinion piece with a “reveal,” it behooves authors to build up to their climax in which they announce their profound findings in or near their article’s conclusion. In this case, I’m supposed to set up my “reveal” of the real reason they’re pushing vaccines so hard. I’m choosing to explain what it is first, then I will demonstrate why this is not only true but also ludicrous and very concerning.

The answer is annoyingly simple on the surface, but when we dig into the motives of those who are actually in power over this situation, we realize just how complex it all is. They — government et al — are pushing the Covid-19 vaccines with everything they have because they’re being told to do so. See, simple. Of course, the first question that people will ask is “Who is telling them to do it?” The second question would be “Why?” And that’s where it all gets complicated.

How They Control the Narrative

First, we have to understand the hierarchy of powers so we can grasp the flow of information. The powers-that-be — which is not necessarily the various governments — did not contact every politician, doctor, journalist, professor, and Big Tech censor and say, “Push the vaccines you guys.” They set the agenda from the very top and trickled it down using various means of control over the perceived powers in government, healthcare, and information dissemination. These different means of control are usually embodied by the insider- or expert-information bestowed on the recipient.

For example, simpleton leaders in government and media were sold on the notion that the vaccines will bring an end to Covid-19. This is ludicrous on every level because the powers-that-be have known from the start that these aren’t really vaccines. They won’t eliminate Covid-19 like actual vaccines virtually eliminated Polio. At best, these injections stave off certain variants of Covid-19 by forcing the body to unnaturally create antibodies.

Without getting too scientific, the “natural” way to get the body to create antibodies through vaccines is to use a dead or weakened version of the virus that the body can easily fight off, at which point it will produce antibodies that protect against future infections. Over time, fewer infected people means fewer people can get infected and diseases like the measles become rare.

The “unnatural” method used by the mRNA and spike-protein injections known as Covid-19 “vaccines” does not use weakened or dead versions of the coronavirus. They take an experimental approach to “trick” the body into thinking it needs to create antibodies. This experimental approach has proven to be disastrous in the past, but those invested into it have persisted for nearly two decades to try to perfect the techniques.

Contrary to popular belief and propaganda, Big Pharma did not suddenly find the solution that has been elusive all this time right when Covid-19 hit. They took what they had which had been marginally successful — or at least less dangerous — and sold it as “completed” science. It’s not even close and based on what many medical researchers have said in the past, it may not be possible for these techniques to ever work properly.