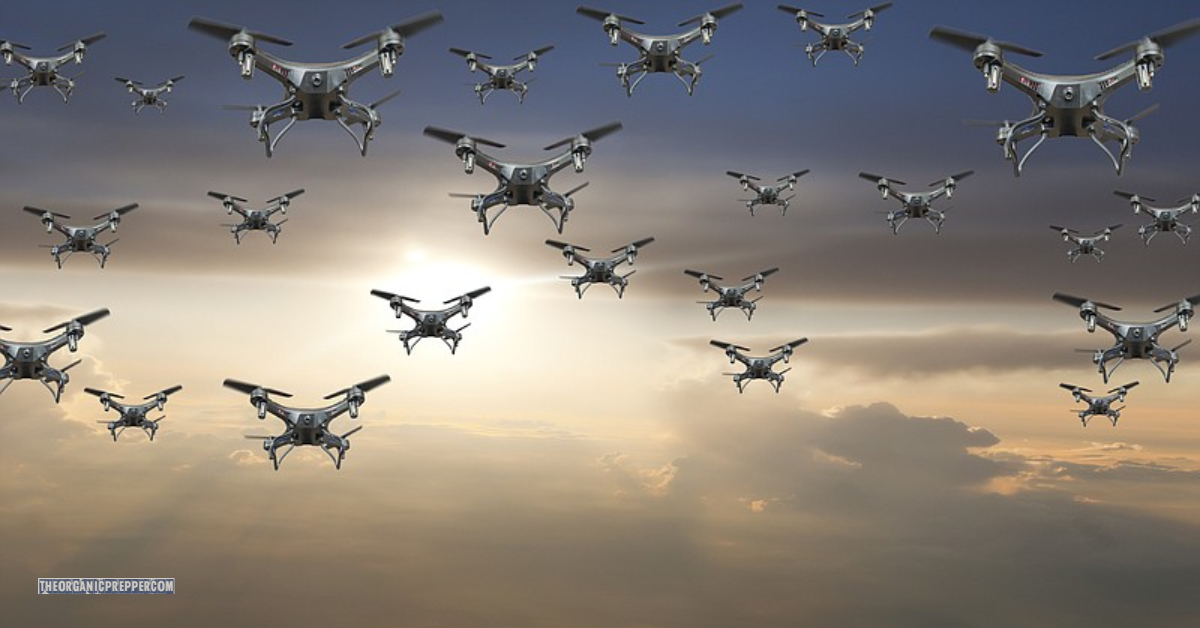 While drones are most certainly nothing new, how they will fight future wars is most certainly novel. Chief of these means is through the addition of autonomous drone ‘swarms’ to many militaries worldwide.

Nations across the globe are ensuring that they don’t fall behind the curve in this new weaponized technology. France has Icarus, Spain has RAPAZ, Russia has Lightning, the UK has Blue Bear, and the UAE has N-Raven.

Armenia recently unveiled a swarming attack drone. And we know that China has a wide range of drone swarm projects ongoing. Of recent note, China successfully tested a swarm of 1000 drones.

The US is most certainly not behind the curve with drones. Currently, the Marines are looking to incorporate a kamikaze drone swarm into their fighting capabilities. In contrast, the Army, the Air Force, the Navy, and DARPA are also crafting their own swarm projects.

A kamikaze drone is likely to include some form of explosive attached to it – not necessarily a novel idea – as it was not that long ago that two drones armed with 2.2 pounds of plastic explosives were used in an attempted assassination of Venezuelan dictator Nicolas Maduro.

[source: the introduction of Rand Paul’s The Case Against Socialism]

In 2018, the US Army released a study suggesting that drone swarms could be 50% more lethal while suffering 50% fewer losses as well. It seems as if this will be a heavy part of the warfare of the future.

Another reason drone swarms are applauded as a weapon of the future is the ability of drones to be fully customized. Need a swarm to have the capability to break open windows and enter a building? Easily done. Need a swarm to contain thermal-equipped ‘surveillance units’ who watch from overhead while attack drones move in? Done.

As Zak Kallenborn – analyst for the Research Affiliate at the Unconventional Weapons and Technology Division at the National Consortium for the Study of Terrorism and Responses to Terrorism (imagine the size of his name badge) – states: the ability to insert drones of differing capabilities within a swarm and the choice of omnidirectional attack are very real possibilities as well.

“I expect a global conversation to emerge on the limits of drone swarm technology,” says Kallenborn. “States may begin to classify drone swarms as weapons of mass destruction, due to the combination of mass harm and lack of controllability.”

Let’s say that you want most of your drones to be observers – equipped with the latest technology in thermal imaging, facial recognition, and optics. They could easily be included within a swarm to provide intel to attack drones, demolition drones, and the like.

The ability to hit from the enemy’s flank becomes exponentially easier as well. A large enough swarm could easily encompass an enemy in a ‘bubble’ of sorts.

Where Could This Potentially Lead?

COVID led to thermal imaging and facial recognition equipped drones used at many locations throughout the United States. It’s not too difficult to see this incorporated into future weaponized drones as well. In many cases, it’s already been done. Way back in 2011, the US Army was already experimenting with facial recognition equipped drones that could not only identify you but could allegedly predict your intentions – whether you were a friend or an enemy – as well.

Could the future become a time of facial recognition-equipped swarm drones being used against political opponents? What if you are somebody who imbibes in content that is not politically sanitized, say, you enjoy Alex Jones, Tucker Carlson, and Project Veritas?

What if prior surveillance attempts have identified you as a member of a particular religion – one that is currently widely under attack from governments, terrorists, invaders, etc.

Theorists have philosophized about what this could look like, leading to the following (fictional) short documentary, Slaughterbots.

How Do We Defend Against Such?

Chicken wire was touted in the past as a potential form of protection against swarms of micro-drones. But what other options do we have? Are shotguns full of birdshot a wise decision? Another drone swarm? EMP weaponry? Radio interference via a software-defined radio? Do you keep Serena Williams close by your side?