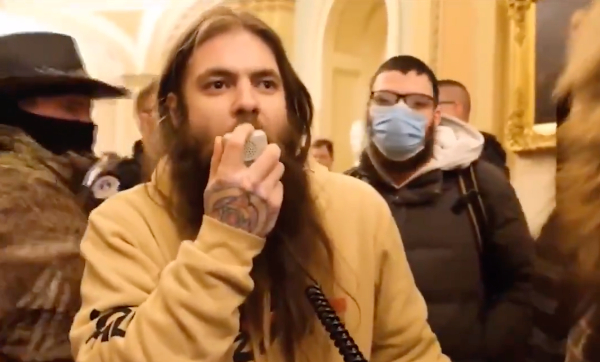 Even a moderately trained observer noticed something odd during the Jan. 6 protest at the U.S. Capitol Building: Many people captured on video were geared up.

They were wearing helmets. They were in protective clothing. Some appeared to be wearing body armor. They had special gloves and tools to break glass and smash doors.

In short, they sure were ‘overdressed’ to go see then-President Donald Trump give his last political rally and speech before being forced out of office. As in, they were inappropriately dressed.

Almost like they came to Washington, D.C. that day for a specific reason: To attack the Capitol building.

But that’s not possible, right? Those people were all Trump supporters, like we’ve been told, and they were simply militarized to stage an “insurrection” by a lying president who fabricated an “election theft” narrative because he lost and didn’t want to leave office. Right?

Revolver News has delved into the Jan. 6 attack like few other news outlets, and what its investigative reporters have turned up is shocking. For instance, after reviewing government charging documents filed in federal court by the Justice Department, the outlet discovered that nearly two dozen people mentioned in the documents are not identified, though other “conspirators” are. What’s more, the so-called “unidentified co-conspirators” mentioned are only given titles like “Person two” and “Person three.” Also, these individuals, according to the documents, appear to have done much worse during the protest than the people actually named by federal prosecutors.

Why is that? How is that possible?

Meanwhile, Revolver News noted a similar situation involving ‘right wing militia’ members who supposedly plotted to kidnap Michigan Democratic Gov. Gretchen Whitmer; those masterminds were infiltrated by FBI operatives, and in fact, it was the operatives who actually planned the crime. They set up the militia members so the deep state could use the arrests as an example of the “threat” ‘right-wing groups’ pose to the government.

Now, it seems, that’s what the Jan. 6 protest was about: To frame Trump and his supporters so they could be targeted and demonized by the Biden regime and eliminated as a political threat.

If it turns out that the federal government (FBI, Army Counterintelligence, or a similar agency) had undercover agents or confidential informants embedded in any of the groups involved in 1/6, the “federal intelligence agencies failing to warn of a potential for violence” looks less like an innocent mistake and more like something sinister.

Indeed, if the federal government knew of a potential for violence in or around the Capitol on 1/6 and failed to call for heightened security, the agencies responsible may in fact be legally liable for the damages incurred during that day.

“It is unsettling to entertain the possibility that the federal government knew of a potential for violence on 1/6 and did nothing to stop it. It presents the question: Why would agencies, or certain elements within, sit back and let something like this happen on purpose?” the outlet posed the question.

Fox News host Tucker Carlson, who dissected the Revolver News report on his program this week, believes he has the answer.

“If you wondered why they’re always comparing January 6 to 9/11, there’s your answer. They’re using the same tactics. And a lot of us missed this the first time around. We didn’t see the obvious,” he said in comparing the Whitmer plot and the Jan. 6 incident.