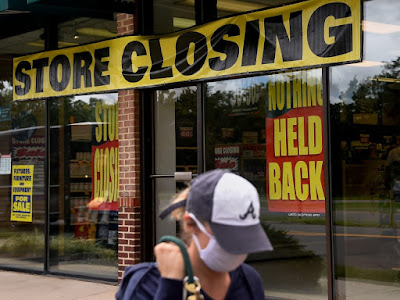 Anyone with even a half of a brain cell still working knew that  state leaders having the power to determine what businesses in their states were “essential” and which were considered “non-essential,” knew the devastation such decisions would cause throughout the country, from coast to coast.

As we have said multiple times, each business and each job at those businesses were ‘essential” to those working there or those who owned those businesses, yet state leaders ignored the imminent destruction of America “small businesses,” in favor of overreaching power grabs.

The preliminary numbers are in, and they tell the shocking truth of the COVID lockdowns that the media, liberal politicians that are still refusing to completely open their states up, and the Biden regime, would prefer Americans did not know.

Hat tip to PJ Media for the sources to the numbers linked below:

• Small businesses –- those with fewer than 500 employees -– are 98% of the businesses in America.

• Fully 89% of these small businesses employ 20 or fewer employees.

The quote below shows the amount of devastation  individual small businesses, their workers, and all of America has suffered due to the permanent loss of nearly 40% of small businesses in the United States.

While bureaucrats gave Walmart, Costco, Lowe’s, and other big-box stores “essential” status, allowing them to stay open during the COVID pandemic, 38.9% of America’s small businesses, the providers of most of the country’s jobs, were forced to close based on fear, hackneyed social-distancing rules, early ignorance about transmission, and an insatiable desire by governors to micromanage the affairs of men.

In short, small businesses could have operated the entire time, exactly like big-box stores did, had it not been for tyrants in statehouses and mayor’s offices around the country destroying lives in the name of “science.”

Twitter user Mark Changizi showed the precipitous drop in small businesses in a series of charts from both Womply and Harvard. When he first checked, 37.5% of businesses had been closed. That number is now 38.9% as of June 13. That’s far worse than when he used the word “decimated” to characterize it.

That is a lot of loss, both for Mom and Pop physical small businesses and those a little larger but not as big as Walmart, Costco and other big box stores, which were all deemed “essential” and allowed to continue to operate and survive.

Other ramifications include shopping mall owners, such as Washington Prime Group who operates more than a hundred shopping malls throughout the nation, and is now forced to file for bankruptcy, with COVID-19 listed as the cause in their recent press release.

The COVID-19 pandemic has created significant challenges for many companies, including Washington Prime Group, making a Chapter 11 filing necessary to reduce the Company’s outstanding indebtedness. Throughout the restructuring process, the Company remains committed to serving as a preeminent operator of retail town centers and will continue to serve its guests. Importantly, the Company will continue to prioritize the health and safety of our guests, retailers, employees and communities.

For a visual representation of how massive this problem is all throughout the country, the blog Cheapism has interactive maps for each individual state showing how many businesses are operating now, in comparison to the numbers as of January 2020.

Below is a screenshot of just one of those maps, California, which forced one of the most tyrannical lockdowns in the nation. 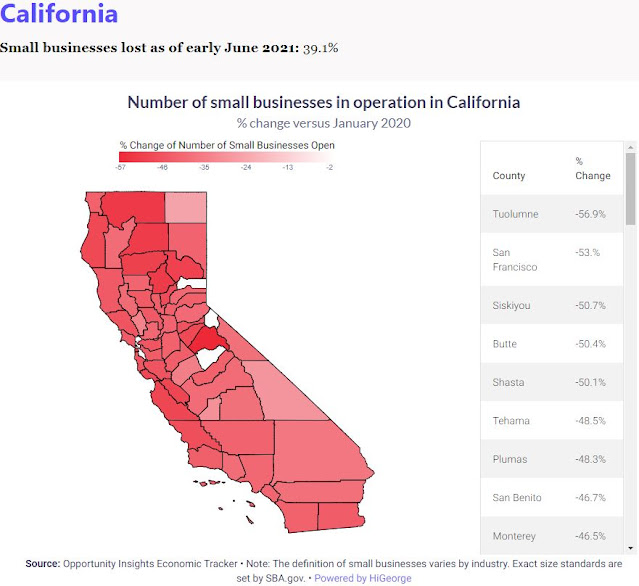 According to Wall Street Journal in mid-April 2021,  there were 200,000 extra closures in the pandemic’s first year alone.

What makes it worse other than the fact there are very small businesses that fall through the cracks and are not listed officially, is the states knew what would happen because the federal reserve economists had predicted even more closures.

Other reports from early April show the situation is getting worse, not better, as some businesses cannot overcome what the lockdowns had done to them.

While the overall closures are nearing Covid highs, the report found that different areas of the country were experiencing varying degrees of difficulty. Some states, like Maine, Idaho and Colorado, were seeing 9%-10% closures, while others like New York, Pennsylvania, and Massachusetts were seeing at least 30% closed.

These numbers are not something we hear a lot about on national news, while local stations do report a bit on it in their area, so the bigger picture of the amount of damage, what we see as a deliberately caused national disaster, is unknown to many that get their “news” from the establishment national media. 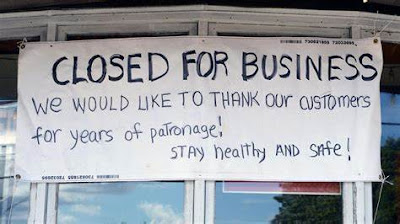 IT WAS ALL FOR NOTHING…….

Back to the original PJ Media piece, at the very top, we see a study by the Proceedings of the National Academies of Sciences, which found that the lockdowns made little, if any difference in “health benefits.”

It was all for nothing. Livelihoods destroyed, families starving and forced to food banks or giveaways. Inability to pay utilities and rent, and  forced to live in cars and RV’s.

Via USA Today in February 2021, in a piece titled “‘Hidden homeless crisis’: After losing jobs and homes, more people are living in cars and RVs and it’s getting worse,” we see the following example as one of many.

For months, Nicholas Atencio and his girlfriend, Heather Surovik, spent nearly every minute of their lives together in a 2000 Cadillac Escalade.

After Atencio, 33, lost his job as a plumber in May, he and Surovik, 36, delivered for Grubhub by day and at night curled up with their puppy on an air bed in the back of their car parked in a lot in Longmont, Colorado, dreaming of being reunited under one roof with Surovik’s teenage son who was living with his grandmother.

“I’m a mom, so I want to fix everything and make it better,” Surovik said. “It’s hard when you don’t have the means to do that when you can’t do anything because you don’t have anything.”

Americans are being driven into their vehicles by COVID-19 pandemic-fueled woes. And their ranks are likely to grow as the government safety net frays and evictions and foreclosures rise.

The term” vehicle residency” was not one I had heard until researching this piece.

It is heartbreaking, and to repeat myself, it was all for nothing!