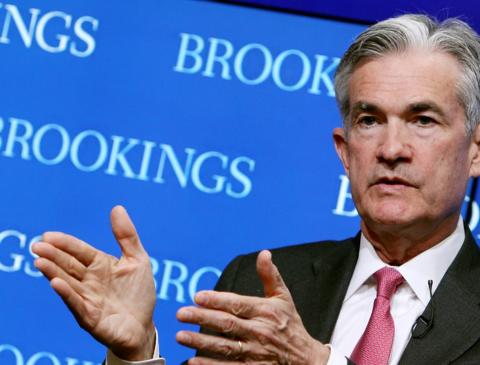 On Wednesday, the Federal Reserve’s Federal Open Market Committee voted to continue with a target federal funds rate of 0.25 percent, and to continue with large-scale asset purchases. According to the committee’s press release:

The Committee decided to keep the target range for the federal funds rate at 0 to 1/4 percent and expects it will be appropriate to maintain this target range until labor market conditions have reached levels consistent with the Committee’s assessments of maximum employment and inflation has risen to 2 percent and is on track to moderately exceed 2 percent for some time. In addition, the Federal Reserve will continue to increase its holdings of Treasury securities by at least $80 billion per month and of agency mortgage‑backed securities by at least $40 billion per month until substantial further progress has been made toward the Committee’s maximum employment and price stability goals. These asset purchases help foster smooth market functioning and accommodative financial conditions, thereby supporting the flow of credit to households and businesses.

This statement might be summarized best as “more of the same,” and in spite of whatever other statements might be made about Fed officials or about how the economy is relatively strong or improving, the fact is Fed policymakers voted unanimously on Wednesday against tapering of any kind, and in favor of continued extremely accommodative policy.

In other words, at the Fed there is no appetite at all for ever testing the waters to see just how fragile this current economy is in spite of all we hear about a “V-shaped recovery” and GDP numbers showing an economy roaring back.

And why should the Fed act as if the recovery were well underway? As of last month, total employment is still more than 7 million jobs below the February 2020 peak. Meanwhile, new jobless claims increased by more than thirty thousand last week, rising to a sickly 412,000.

Nevertheless, the “big news” coming out of the Fed—at least as far as many news outlets were concerned—is the fact that many FOMC members expect the Fed to raise the benchmark rate “as soon as 2023” based on the so-called dot plot showing FOMC member expectations. As CNBC reports:

Wednesday’s forecast showed 13 members of the Federal Open Market Committee believe the Fed will increase rates in 2023 and the majority of them believe the central bank will hike at least twice that year. Only five members still see the Fed staying pat through 2023. In fact, seven of the 18 members see the Fed possibly increasing rates as early as 2022.

In Washington terms, this means nothing at all. This wasn’t a commitment from FOMC members to actually raise the rate two years from now. This was simply an opinion—polled FOMC members expect the rate to go up. An expectation that something might happen two years from now hardly constitutes a meaningful prediction. One would need to be extremely credulous to read the FOMC’s assessment as a “hawkish” move.

After all, the policy situation was very similar during the decade that followed the 2008 financial crisis. For many years, the Fed under Janet Yellen repeatedly described the economy as “strengthening” and experiencing moderate growth. The Fed repeatedly hinted at a tapering and tightening of policy that would happen “soon.” And yet the Fed kept the target rate at 0.25 percent for nearly seven years, from early 2009 through most of 2015. The rate never climbed above 1 percent until 2017. But all the while, the FOMC repeatedly suggested that any day now it would “normalize” things.

So, now when we hear that the Fed will be tapering in 2023, we should read this as something that is possible, of course, but “2023” could just as easily mean 2025 or 2028. At least, that’s certainly what experience suggests, especially as our jobless recovery continues.

And speaking of “normalizing” things, the Fed during the Yellen years had long also hinted at scaling back its portfolio. This, of course, never happened. Total assets owned by the Fed only grew from 2012 to 2015, and then held steady at around $4.4 trillion until 2018, when the Fed slightly scaled things back. But signs of trouble were already apparent by late 2019 with the repo panic, as the Fed was back in the asset-purchasing game. Now Fed assets have climbed to an eye-watering $8 trillion. Combine this with this week’s promise to keep buying “at least $80 billion per month and of agency mortgage‑backed securities by at least $40 billion per month” and it’s clear the talk of getting hawkish at the Fed is little more than talk at this point.

On the other hand—this shift toward predicting rate hikes in 2023 did represent a change in messaging from the FOMC, likely forced by the fact the Fed can no longer deny that price inflation is occurring.

In March, for example, FOMC members said they didn’t expect any action on tapering until 2024. But then the Fed, in order to look like it has some connection to reality, changed its inflation forecast:

The Fed also sharply increased its inflation forecasts for the year. It now sees inflation running to 3.4% this year, above its previous estimate of 2.4%. The central bank also slightly hiked its PCE inflation estimates for 2022 and 2023.

So, the Fed has been forced to admit the reality that has been long clear to normal people who buy houses, education, food, and other services. Inflation is real. Nevertheless, the Fed insists it’s all temporary:

Though the Fed raised its headline inflation expectation to 3.4%, a full percentage point higher than the March projection, the post-meeting statement stood by its position that inflation pressures are “transitory.” The raised expectations come amid the biggest rise in consumer prices in about 13 years.

It’s unlikely any of this is anything more than optics and public relations, however. The Fed has to look like it’s taking price inflation seriously, so it admits there’s some but dismisses it as temporary. Moreover, FOMC members send the message they’re concerned by saying, “We might have to raise rates in 2023 instead of 2024.”

In the real world, however, none of this tells us anything at all about what the Fed actually plans to do in 2023.

Yet markets are so shaky and so dependent on easy money from the Fed that once the Fed sent the message it might have to act on inflation at some point a few years from now, the Dow Jones crashed by more than 300 points.

This further illustrates what some Fed observers are now saying about the state of the US economy: the Fed isn’t here to take away the punch bowl anymore. The Fed is the punch bowl. Even the mildest suggestion that it might raise rates years from now sends panic through the ranks.