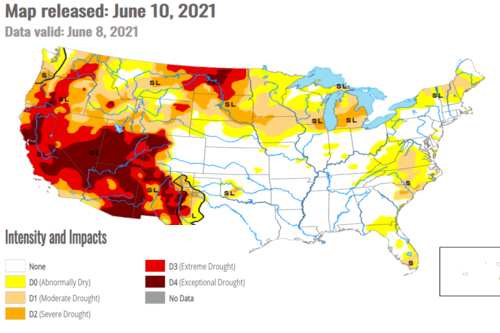 With ranchers out West forced to sell-off their cattle while farmers leave thousands of acres of farming land unplanted due to what’s being called a ‘record drought’ now hitting much of Western America as seen in the map above taken from the US Drought Monitor, we’ve got to take a look within this story at the CIA recently ‘ghosting’ a 2016 story titled “Director Brennan Speaks at the Council on Foreign Relations”, a story within which John Brennan CONFIRMED ‘weather modification programs’ though the mainstream media still loves to call ‘weather modification’ a ‘conspiracy theory’.

While a current visit to where that story used to be gets us a 404 error with the message “the page you requested doesn’t exist”, we’re thankful that story has been saved at Archive (and numerous other locations), for within it, Brennan tells a story that must be told considering what’s happening in America now with extreme drought already striking and Summer having not even officially begun yet.

With the excerpt below from that story the CIA is now censoring but saved at Archive offering us absolute proof that weather modification programs exist and that they could be used to not only alter weather patterns but ‘benefit some regions at the expense of others’, might America’s West now suffering from such drought conditions be ‘under attack’, this drought a result of weather warfare? Before you dismiss such a ‘conspiracy theory’, let’s take a look at part of what John Brennan said to the CFR back on June 29th of 2016 as also heard in the 2nd video at the bottom of this story.:

“Another example is the array of technologies—often referred to collectively as geoengineering—that potentially could help reverse the warming effects of global climate change. One that has gained my personal attention is stratospheric aerosol injection, or SAI, a method of seeding the stratosphere with particles that can help reflect the sun’s heat, in much the same way that volcanic eruptions do.

As promising as it may be, moving forward on SAI would raise a number of challenges for our government and for the international community. On the technical side, greenhouse gas emission reductions would still have to accompany SAI to address other climate change effects, such as ocean acidification, because SAI alone would not remove greenhouse gases from the atmosphere.

On the geopolitical side, the technology’s potential to alter weather patterns and benefit certain regions at the expense of others could trigger sharp opposition by some nations. Others might seize on SAI’s benefits and back away from their commitment to carbon dioxide reductions. And, as with other breakthrough technologies, global norms and standards are lacking to guide the deployment and implementation of SAI.”

And with the map above showing extreme drought hitting not only the Western United States but other regions as well, as this story over at WMTW-8 in Maine reports, nearly 2/3 of that far-north, East coast state is suffering from ‘abnormally dry’, or drought conditions, and the Summer of 2020 bringing one of the hottest summer’s on record hinting of what’s ahead for the Summer of 2021.

So why has the CIA ‘ghosted’ this 2016 story which gave us proof of Weather Modification programs being used via the mouth of former CIA Director John Brennan? With outright and blatant censorship of all kinds going on in 2021 under ‘big tech’ and the Democrats, we can often find out more about what’s going on by what’s being censored than by what they ARE talking about. 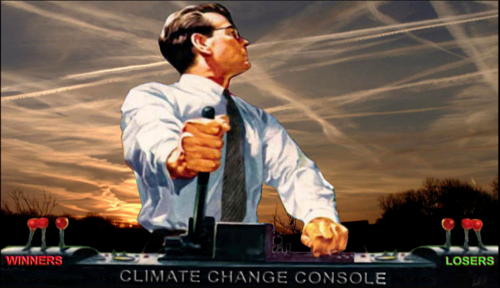 So after reading that from the CIA’s former head John Brennan, do you still think man attempting to manipulate the weather is some ‘crazy conspiracy theory’? Coincidentally, or not, in that same address, Brennan also made the following statement that practically warned of the biggest story of 2020.

“Moreover, as we have seen with just about every scientific leap forward, new technologies often carry substantial risks to the same degree that they hold tremendous promise.

Nowhere are the stakes higher for our national security than in the field of biotechnology. Recent advances in genome-editing that offer great potential for breakthroughs in public health are also cause for concern, because the same methods could be used to create genetically-engineered biological warfare agents. And though the overwhelming majority of nation states have tended to be rational enough to refrain from unleashing a menace with such unpredictable consequences, a subnational terrorist entity such as ISIL would have few compunctions in wielding such a weapon.”

And would the Democrat party unleash such a weapon upon America and the world to keep Americans at home, enabling massive mail in voting fraud during the 2020 election? We wouldn’t it past them.

So if you’re still a weather modification skeptic, while we can understand your skepticism, we’re going to take a look here at two more stories which prove its’ existence beyond a shadow of a doubt.

With this first one from CNN of all places published back in December of 2020 reporting that the nation of China had revealed plans to drastically expand an experimental weather modification program to cover an area of over 5.5 million square kilometers (2.1 million square miles) — more than 1.5 times the total size of India, that story also reported that in the next five years, the total area in China which will be covered by artificial rain or snowfall will reach 5.5 million sq km, while over 580,000 sq km (224,000 sq miles) will be covered by hail suppression technologies.

Also reporting within that story that China’s weather modification programs will help with disaster relief, agricultural production, emergency responses to forest and grassland fires, and dealing with unusually high temperatures or droughts, how could ‘weather modification’ still be just a ‘conspiracy theory’ when even CNN reported in December of 2020: