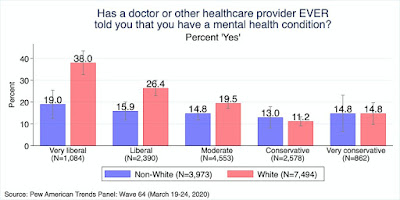 A study done by Pew Research back in March 2020, but received little to no attention until recently, provides even further evidence that those that self-identify as liberals, also report they have been diagnosed with a mental health issue at a much higher rate than those that are listed as “moderate,” or “conservative.”

In an analysis of that Pew Research study,  Evie Magazine found the numbers for “white liberal women,” are even worse.

The study, which examined white liberals, moderates, and conservatives, both male and female, found that conservatives were far less likely to be diagnosed with mental health issues than those who identified as either liberal or even “very liberal.” What’s more, white women suffered the worst of all. White women, ages 18-29, who identified as liberal were given a mental health diagnosis from medical professionals at a rate of 56.3%, as compared to 28.4% in moderates and 27.3% in conservatives.

This also helps explain the constant video uploads by liberals, mostly women,” melting down and thinking it is somehow normal behavior.

This backs up previous studies, but the numbers are becoming worse, as the “politics” become more unhinged as well.

A few examples of the most radicalized ideological and/or cultural issues that liberals are pushing.

“Chestfeeding” versus breastfeeding, which is yet another push to erase women in the name of “inclusion,” because they insist that to “identify” as a women, makes on a women no matter what genitalia they were born with.

Insistence on a new “American flag” to represent “everyone,” by claiming Old Glory is the new “confederate” flag and inherently racist.

Claims that to be white is to automatically be a racist, which means whites identifying as liberal are calling themselves racist for nothing more than the color of skin they were born with.

Isn’t that a form of self-hatred?

Abortion is referred to as “reproductive rights,” when frankly abortion has nothing to do with reproduction because it is the exact opposite. Killing a child is in no way, shape or form, “reproduction.”

Liberals push to have transgenders allowed to compete in women’s sports despite the physical disparity, no matter what the person in question “identifies” as. White liberal women are pushing the hardest for this, which again, go against everything true feminists fought for.

(Note) There are some feminists against the men in women’s sports and the “chestfeeding” terminology, but their voices are drowned out by the harpies screaming bigotry if anyone dares speak out against the erasing of women.

There are so many ideological topics that are counter-productive to women, yet white liberals rush to jump on the bandwagon to support those issues.

It is nothing short of supporting gender suicide.