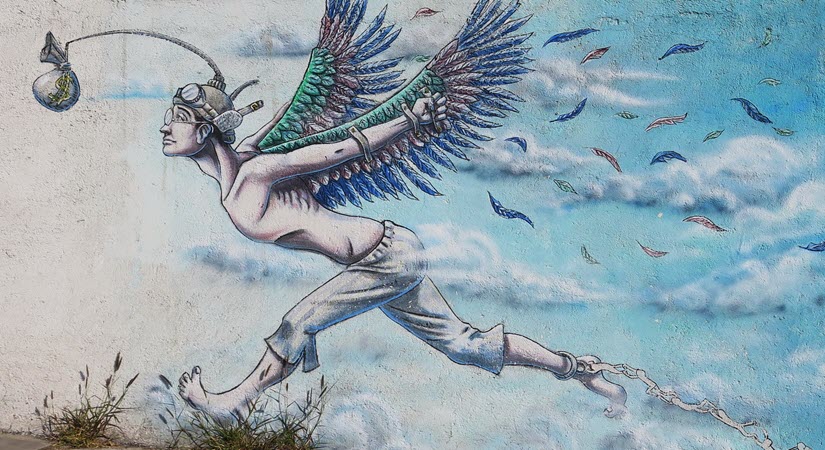 The Social Security Administration (SSA) is in enough trouble on its own. But now, there are three big cultural and economic forces that appear to be taking their toll on the program.

The money you pay in taxes isn’t held in a personal account for you to use when you get benefits. We use your taxes to pay people who are getting benefits right now. Any unused money goes to the Social Security trust funds, not a personal account with your name on it.

Regardless of where the money comes from or whose name is on it, it’s running out.

So let’s take a quick look at each of the big economic trends happening today, and how they’re taking a toll on Social Security even as you read this.

#1 – People are retiring at a faster pace

According to Forbes’s Bob Carlson, “In September 2020, about 3.2 million more baby boomers were retired than a year earlier.”

It’s quite likely that the COVID-19 pandemic played a role here, and Carlson’s source, the Pew Research Center report, shows over 50% more Baby Boomer retirements than 2019. There were also more of those retirements in 2020 than any year since 2012 (see bar graph): 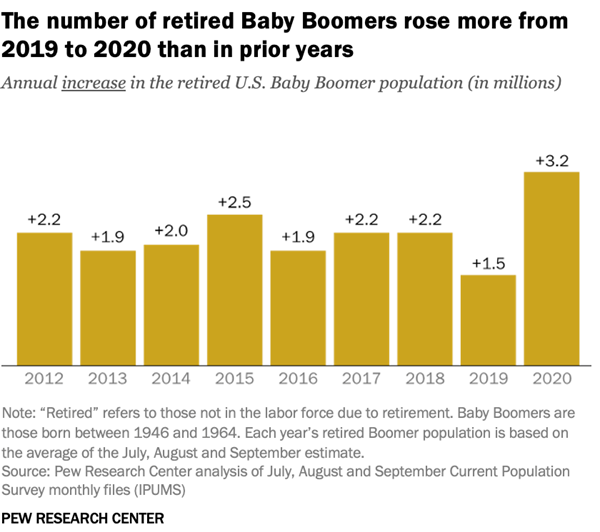 Carlson came to a startling conclusion for Social Security:

Whatever the cause, it’s bad news for the Social Security retirement trust fund. We’re still waiting for the 2021 annual report from the program’s trustees, but it’s likely to show the trust fund will run out of money years earlier than estimated in last year’s report. [emphasis added]

People retiring sooner than expected leaves fewer people paying into Social Security, so that’s a fairly obvious conclusion. We won’t know what the specific impact will be until that annual report for 2021 is released. Still, it’s not positive news.

When we consider our next big development, you’ll see there are even fewer people paying into the system…

#2 – The ideas of work and retirement are changing

According to Ramsey Solutions: “Retirement isn’t an age — it’s a financial number. And there’s no law that says you have to work until you’re 65. That’s a myth!”

That’s your two-sentence introduction to the F.I.R.E. (Financial Independence, Retire Early) movement. The article continues by explaining what this means:

The goal is to save and invest aggressively—somewhere between 50–75% of your income—so you can retire sometime in your 30s or 40s.

To be sure, this is an extreme movement: super-low living costs, simple lifestyles, stringent and zealous savings goals. Those who are successful are problematic, at least from a Social Security perspective.

A successful F.I.R.E. will effectively sit out their peak earning years, denying the SSA their tax dollars. On the other hand, they will also have a smaller claim on future Social Security payments. (That’s not quite as important, because “We use your taxes to pay people who are getting benefits right now,” remember?)

Couple F.I.R.E with another trend called the “gig economy” where workers make a living doing lots of little jobs rather than a single, full-time job. Think of an Uber or Lyft driver, an AirBnB host or a freelance writer to get the idea.

The F.I.R.E. movement is big on gig work:

I love the gig economy, am participating in it, and can’t wait to see where it goes. I love the flexibility it gives me and I don’t mind making way less than a W2 salary to get that flexibility. It’s another one of the superpowers that financial independence provides – the ability to make way less doing something you enjoy.

If people live on less, they are earning less in exchange for more free time. That means less payroll tax generated per gig worker. That certainly won’t help the Social Security Trust fund its obligations much, even if the gig workers all scrupulously report every dollar of income and pay their 15.3% self-employment tax.

Rising inflation doesn’t only erode your purchasing power, it presents challenges to the Social Security program too.

Couple that with a lower real rate of return (interest minus inflation) for the Trust Fund’s U.S. bond portfolio, at the moment at least -1.5%. That’s the opposite of return on investment.

If you’re not too depressed to keep reading, it gets worse. Economist Mike Shedlock calculates inflation rates adjusted for increased housing costs. His numbers put the real rate of return is -4.1% (the lowest since 1980).

Regardless of your method of calculating the real rate of return, it’s negative. The money in the SSA trust fund is losing purchasing power every day.

That’s simply not sustainable. And it’s a red flag for those of us counting on Social Security to ease the transition into our golden years.