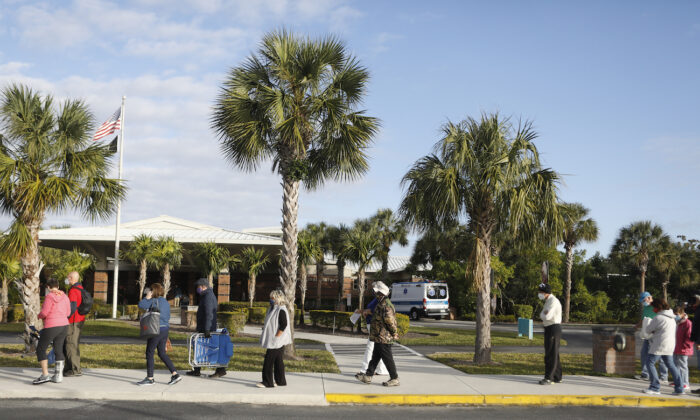 Florida was the No. 1 relocation destination for Americans in 2020, according to Move.org. New York and California took first and second place in the contest for which states had the most people choosing to leave.

Justin Pearson is a 27-year-old truck loader for a Target distribution center. A resident of Hemet, California, for 22 years, Pearson moved to the town of Riverside for another three years until the dramatic change in policies and rising cost of living made it impossible for him to live on his own. There also was no way he could afford to buy his own home, he said. In order to survive at all, he fled to Lake City, Florida.

While the national average in property taxes is 1.07 percent, Floridians pay only 0.83 percent, and Californians pay even less—0.73 percent. But Pearson said the cost of everything else in California erased the benefit of lower property taxes. Additionally, Florida is one of only nine states in the country that has no state income or wage taxes.

“With the COVID restrictions, a lot of businesses closed,” Pearson told The Epoch Times. “In turn, that caused an increase in homelessness. Then the governor enacted the zero-dollar bail policy and an early prison-release program, which caused the crime rate to skyrocket. Gas taxes were added. The cost of living was so high you could not get by if you were single. You literally had to have two or three incomes in order to make it.”

A specific motivator in Pearson’s decision to choose Florida was his “deep respect” for Gov. Ron DeSantis because of his moves to ban Critical Race Theory, to enact an anti-riot bill, and his unapologetic position of “backing the blue.” Pearson also admires the widely criticized decision by DeSantis to lift all COVID restrictions, which he believes are killing California.

California Gov. Gavin Newsom chose to maintain COVID-19 lockdown restrictions and to extend both state and federal emergency taxpayer-funded unemployment benefits. California’s unemployment rate of 8.3 percent is among the highest in the nation, second only to Hawaii’s 8.5 percent.

The national average is 6.1 percent.

Pearson said California’s high unemployment fueled an explosion in homeless numbers, which had already been exacerbated by Newsom’s 2017 mental health budget cuts, which left unstable patients who would have otherwise been cared for wandering the streets.

“You can walk on every corner and find trash everywhere, needles and feces,” Pearson said. “It’s disgusting.”

Pearson also noted how illegal immigrants are flooding into California and the governor is doing nothing to stop it.

“In fact,” Pearson said, “he gave them stimulus paychecks using our tax dollars.”

Pearson, who ran back-the-blue rallies in California, said it was becoming too dangerous in California for Republicans to stand up for what they believed in.

“People would come over and assault us,” Pearson recalled. “But, because of the zero-dollar bail policy, they would get away with it. California is just a difficult place to live and I don’t see it changing anytime soon until people in California start making better decisions on who they vote for.”

Many of Pearson’s sentiments are shared by Laura Gainsborg.

“I’ve been in New Jersey now for over 30 years and that’s enough,” the former Florida resident told The Epoch Times.

“Talk about blue,” Gainsborg said of Pennington, New Jersey. “It’s a tiny little town and the people are as liberal as they get!”

Like Pearson from California, Gainsborg wanted to return to Florida because she too felt uncomfortable discussing politics. According to Gainsborg, also a Republican, people in her predominantly liberal New Jersey neighborhood are not very receptive to listening to the other side.

“There are very few people we can talk to,” Gainsborg lamented of the place she called home for three decades. “I want to move back to Florida. People in Florida are always friendly. You can talk to anybody, even those with different political leanings.”

Gainsborg was also drawn to Florida by the leadership of Gov. Ron DeSantis. As a retired teacher, she supports his ban on critical race theory. She also favors his move to opt out of the additional $300 per week federal unemployment benefits, which she believes encourages people to avoid going back to work to earn a paycheck.