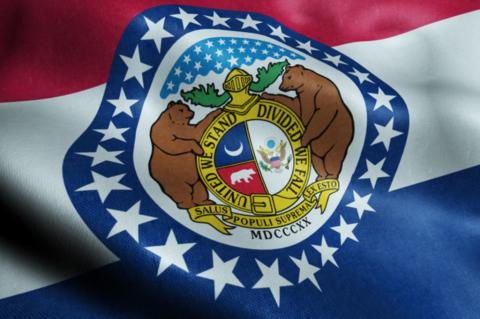 Declares that all federal acts, laws, executive orders, administrative orders, court orders, rules, and regulations, whether past, present, or future, that infringe on the people’s right to keep and bear arms as guaranteed by the Second Amendment to the United States Constitution and Article I, Section 23 of the Missouri Constitution must be invalid in this state, including those that impose a tax, levy, fee, or stamp on these items as specified in the bill; require the registration or tracking of these items or their owners; prohibit the possession, ownership, use, or transfer of a firearm; or order the confiscation of these items

Moreover, the act opens up law enforcement officials and other state personnel to legal penalties if they do enforce federal firearms laws and

[s]pecifies that any entity or person who knowingly acts under the color of any federal or state law to deprive a Missouri citizen of the rights or privileges ensured by the federal and state constitutions to keep and bear arms must be liable to the injured party for redress, including monetary damages in the amount of $50,000 per occurrence and injunctive relief. … Sovereign immunity shall not be a defense.

Basically, the law attempts to do two different things. The first is to declare certain federal laws invalid within the state.

The second is to state that police are prohibited from providing “material aid and support” to federal officials seeking to prosecute Missouri residents under federal gun laws.

The first aspect of the legislation is on shaky ground. The second aspect, however, has the potential to have a real effect on the enforcement of federal gun laws in the state.

States Can’t Invalidate Federal Laws, But They Don’t Have to Help Enforce Them

Naturally, gun control advocates and opponents of decentralization have condemned the bill, mostly on grounds of the legal doctrines and federal preemption and federal supremacy.

But this only applies to the part of the bill claiming to invalidate federal law. National Public Radio, for instance quotes law professor Stephen Vladeck, who states: “If I am a resident of Missouri, I am no less subject to federal gun laws today than [before the law was passed].”

This is true enough in the strict legal sense. Federal gun laws have not actually been repealed in Missouri, and the federal government can still draw upon its own resources to attempt to enforce these laws within the state.

On the other hand, by directing state officials to not enforce federal laws in the state, the new act makes it more difficult to enforce federal law and deprives the federal government of resources it has long assumed it could call upon whenever it wanted. After all, the federal government has long regarded state and local police as “valuable partners” who act as informants and who provide personnel, firepower, jails, and other amenities that make it easier for federal officials to arrest and prosecute locals.

If the new Missouri legislation truly leads to a situation in which federal officials can’t count on any state or local manpower, this will mean a de facto decline in the ability of federal officials to enforce federal law in the state.

This is not unprecedented. During the 1850s, for example, state governments passed laws prohibiting state officials from assisting federal agents who sought to enforce the federal fugitive slave acts.

The Lessons We Learned from State Marijuana Legalization

But there is a much more recent example that we can look to to better understand Missouri’s new law.

We have seen this tactic at work already in the realm of federal marijuana laws.

For example, when Colorado voters approved Amendment 64, which legalized recreational marijuana in the state, the result, in practice, was something similar to what Missouri is attempting.

Amendment 64 declared marijuana to be legal in the state under a broad variety of circumstances, and the text of the amendment simply stated that marijuana would be legal for people in Colorado over twenty-one years of age.

This invalidated state and local laws outlawing marijuana. Of course, marijuana continued to be illegal under federal law, and federal officials were free to enter the state and prosecute business owners and individuals who owned, bought, and sold marijuana.

And yet this rarely happened. There were some efforts—and numerous threats—by federal officials to “crack down” on locals in Colorado, but these efforts proved to be anemic.

It should be noted that the Colorado amendment (and enacting legislation) was in fact much more mild than the Missouri legislation. The amendment did not explicitly prohibit state officials from cooperating with federal officials. But the result in practice was similar. State and local law enforcement backed off substantially from all enforcement efforts, and federal law came to be seen as an alien force working contrary to the interests of policymakers of both parties. Colorado members of Congress (from both parties) introduced and supported legislation seeking to limiting federal enforcement of marijuana laws in Colorado or in states that had legalized the use and possession of marijuana.

Moreover, when it was thought that the Trump administration might finally “crack down” on Coloradans using marijuana, state legislators did introduce legislation specifically prohibiting state officials from cooperating with federal officials in “Arresting a Colorado citizen or person lawfully present in Colorado for committing an act in Colorado that is a Colorado constitutional right.” (This legislation passed the House but failed in the Senate).

Today, federal marijuana prohibitions and enforcement in Colorado have been significantly limited and scaled back.

Part of the reason marijuana legalization at the state level has worked so well in pushing back against federal law is that public opinion is on the side of legalization. As more and more states moved to legalize marijuana, it became clear that the public in general and many members of Congress had little interest in really pressing the issue.

State-level moves to legalize marijuana have not made federal law “invalid” in any de jure sense. But they have gone a long way toward doing so in practice.

Can Opponents of Federal Gun Laws Copy the Colorado Strategy?

Can Missouri succeed in the way efforts to legalize marijuana have succeeded through state legalization?

This will depend on both public opinion and the willingness of other state governments to join in.

Only after several states—ideally including politically powerful states like Florida and Texas—start to line up on the side of state autonomy in gun legislation will we know if there is enough political will to cripple federal enforcement as has happened with marijuana.

In other words, states’ efforts to end federal enforcement within their borders are as much a political effort as they are a legal one. Legal scholars can talk about the supremacy clause and federal preemption until they’re blue in the face, but it’s political trends and public opinion that will ultimately decide the outcome.