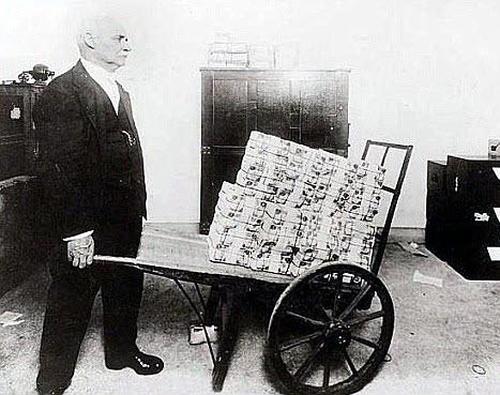 Earlier this year, none other than Michael ‘Big Short’ Burry confirmed BofA’s greatest fears, as he picked up on the theme of Weimar Germany and specifically its hyperinflation, as the blueprint for what comes next in a lengthy tweetstorm cribbing generously from Parsson’s seminal work, warning that:

“The life of the inflation in its ripening stage was a paradox which had its own unmistakable characteristics. One was the great wealth, at least of those favored by the boom..Many great fortunes sprang up overnight…The cities, had an aimless and wanton youth”

“Prices in Germany were steady, and both business and the stock market were booming. The exchange rate of the mark against the dollar and other currencies actually rose for a time, and the mark was momentarily the strongest currency in the world” on inflation’s eve.

“Side by side with the wealth were the pockets of poverty. Greater numbers of people remained on the outside of the easy money, looking in but not able to enter. The crime rate soared.”

“Accounts of the time tell of a progressive demoralization which crept over the common people, compounded of their weariness with the breakneck pace, to no visible purpose, and their fears from watching their own precarious positions slip while others grew so conspicuously rich.”

“Almost any kind of business could make money. Business failures and bankruptcies became few. The boom suspended the normal processes of natural selection by which the nonessential and ineffective otherwise would have been culled out.”

“Speculation alone, while adding nothing to Germany’s wealth, became one of its largest activities. The fever to join in turning a quick mark infected nearly all classes..Everyone from the elevator operator up was playing the market.”

“all the marks that existed in the world in the summer of 1922 were not worth enough, by November of 1923, to buy a single  newspaper or a tram ticket. That was the spectacular part of the collapse, but most of the real loss in money wealth had been suffered much earlier.”

“Throughout these years the structure was quietly building itself up for the blow. Germany’s #inflationcycle ran not for a year but for nine years, representing eight years of gestation and only one year of #collapse.”