It Doesn’t Get Any Bigger Than CYBER POLYGON.

What the heck is Cyber Polygon—REALLY ? !

Imagine if there were 100+ articles posted on the Internet during August of 2001 predicting the US Government-sponsored, false flag terrorist attacks that occurred on September 11th, 2001?

Well, if ever there was a HUGE opportunity for humanity to avert another global catastrophe/crisis that has been fastidiously planned by the New World Order globalist cabal, that time is now.

Because of the Cyber Polygon cyber-conference that will be held on Friday, July 9, 2021 which is supported by the notorious World Economic Forum Centre for Cybersecurity as follows. 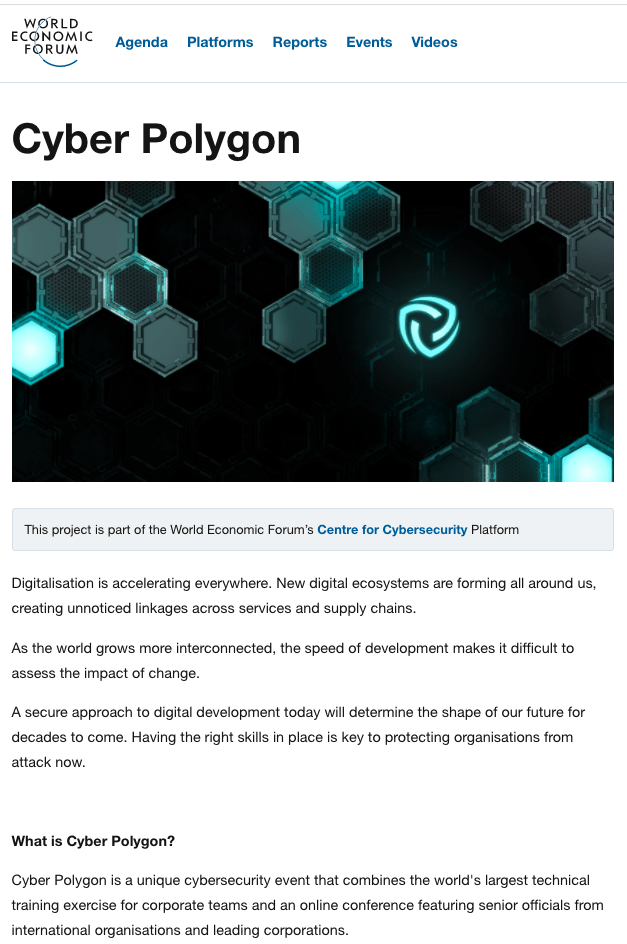 Quite conveniently, there has been a suspicious spate of high-profile ransomware attacks and cyber-security compromises in the USA and beyond since POTUS imposter Joe Biden took office.

Clearly, these black cyber-operations and MSM-conducted psyops were deliberately carried out before the upcoming Cyber Polygon conference begins.

After an utterly staged and fake COIVD-19 pandemic, there’s simply no better way to shut down the entire planetary civilization than to perpetrate a series of cyber-attacks across the world community of nations.  Particularly a cyber-security attack that so threatens national security it could trigger a nuclear war is there potential for bring the world to a standstill.

Let’s face it: the power elite really screwed up with their highly flawed execution of THE GREAT SCAMDEMIC.  Therefore, they have backed themselves deeply into a corner— WITH NO WAY OUT.

Where 9/11 occurred only in the back yard of those living in New York City and Washington, D.C., OPERATION COVID-19 has taken place on all seven continents and in everyone’s back yard.  Hence, every resident on the planet has an interest in knowing what the hell really happened with the COVID CON.  And, how such an obvious and vast international criminal conspiracy was allowed to occur and be incredibly covered up to this very day.

As a result of so much anger and frustration about the devastating CORONAhoax, people everywhere want answers—NOW.  The Powers That Be know that full well; and they are getting even more desperate.  Hence, they are carrying out one dramatic ransomware attack after another so as to distract the general public.  Similarly, folks everywhere are feeling the threat of cyber-security attacks in all of the most important areas of their lives.  Who else but the CIA, MI6, MOSSAD are behind all of these unsettling cyber-attacks.

In light of the fact that the Covid Plandemic has failed miserably to advance the NWO agenda to complete the GREAT RESET, the malevolent globalists will do just about anything to jump start that nation-destroying initiative.

It’s now evident that the GREAT RESET is the central pillar of the nefarious NWO agenda being implemented to established a totalitarian One World Government.  In view of the countless crime sprees committed by the power elite, which have made it to the front page of the Internet over many years now, TPTB now have no choice but to lock the whole place down and back it up with the enforcement arm of a planned Global Security Superstate.