“You are a pathetic liar”: CDC senior scientist to CDC’s head of immunization (DOCUMENT)

A CDC internal email released through a Freedom of Information Act request reveals just how nasty things got behind closed doors after a CDC senior scientist confessed to covering up a link between vaccines and autism, and implicated his CDC colleagues.

In the email, Thompson responds to an interview DeStefano gave me in 2014. It was after Thompson stunned the scientific community by saying that he, DeStefano, and other CDC scientists committed fraud in a major vaccine-autism study. It was information that upended a decade-and-a-half of government and vaccine industry narratives on the controversy, and stood to impact some of the millions of families in the U.S. who have autistic children.

According to Thompson, he and his fellow CDC scientists covered up a link between MMR vaccine and autism in African-American boys. “The omitted data suggested that African American males who received the MMR vaccine before age 36 months were at increased risk for autism,” Thompson later testified. 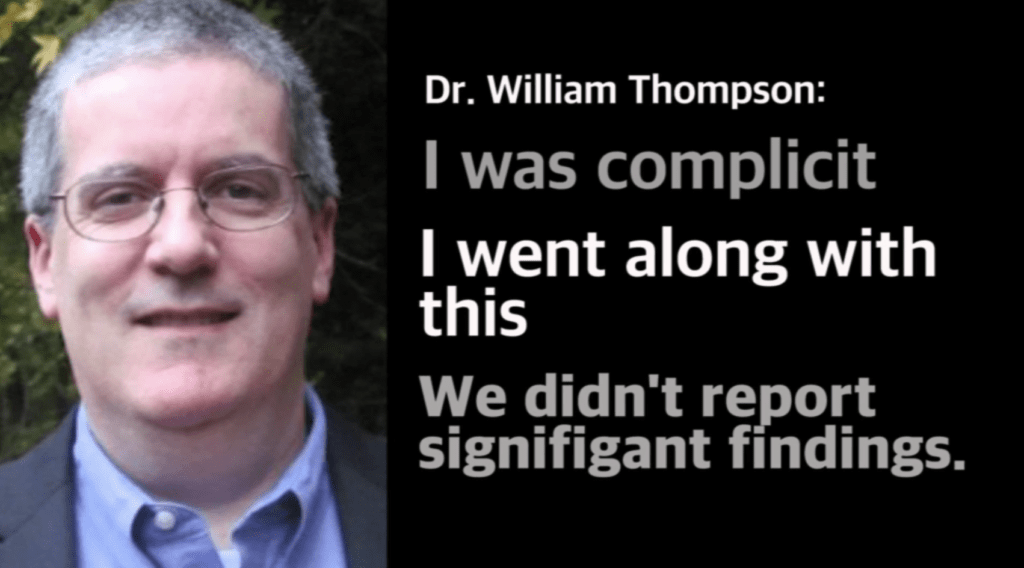 CDC officials disposed of study documents “in a huge garbage can”

As part of the alleged fraud and coverup, Thompson said he and the other CDC scientists who conducted the research got together and literally trashed study data.

Thompson first revealed his role in the fraud during a series of phone conversations with the parent of an autistic child. The parent surreptitiously recorded the calls, in which Thompson confessed and said he lived with tremendous guilt.

When the parent made the recordings public, Thompson admitted to scientific fraud and issued a statement issued through his attorney. “I regret that my coauthors and I omitted statistically significant information,” read the statement, in part. He also described how he says he and his CDC colleagues had a meeting and literally threw documents from the research into a garbage can.

The coauthors scheduled a meeting to destroy documents related to the study. The remaining four coauthors all met and brought a big garbage can into the meeting room and reviewed and went through all the hard copy documents that we had thought we should discard and put them in a huge garbage can. However, because I assumed it was illegal and would violate both FOIA and DOJ requests, I kept hard copies of all documents in my office, and I retained all associated computer files.

CDC would not permit Thompson to do media interviews after he blew the whistle.

In the interview with me in 2014, DeStefano, a co-author with Thompson on the questioned study, defended the CDC’s vaccine-autism research. I asked if he was aware of Thompson’s concerns prior to them being revealed publicly.

“I mean I’ve continued to see, uh, see him for over the past ten years and we’ve interacted fairly frequently, and, uh, no I wasn’t aware of this,” DeStefano told me.

“So whoever he raised his concerns to, he didn’t, he didn’t raise it to you or anybody you knew of?” I asked.

“No, I mean the last time I saw him was probably about two months ago, and he didn’t mention anything about this,” replied DeStefano.

“And at the time he didn’t seem concerned when you said there was a consensus?”

“No, yeah,” said DeStefano. “I mean at the time he did these analyses he did, you know, he did point out that in one group, you know in that larger group the the the measures of association [between MMR vaccine and autism] were higher than in the, uh, birth certificate group and, you know, we discussed that and for the reasons I mentioned, uh, we came to consensus that the, uh, birth certificate uh results were more valid.”

Thompson apparently heard or read a transcript of the recorded interview four years later, in 2018, and fired off an email to DeStefano. The subject was titled: “Your dishonest behavior —- trying to portray us as ‘friends’”

Thompson’s email included the link to my interview with DeStefano and the transcript. 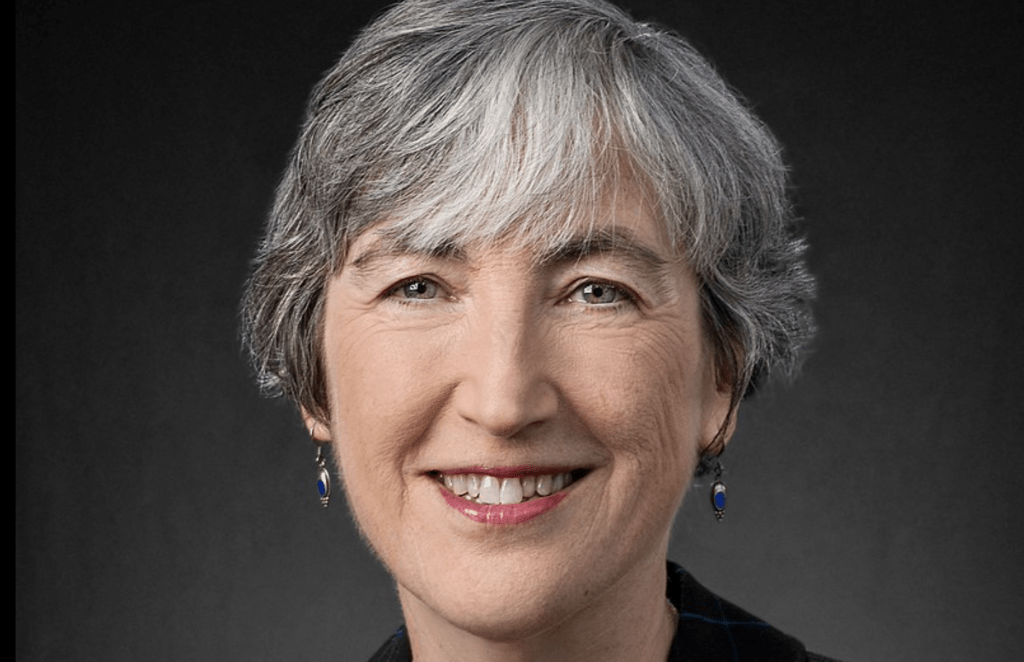 Also in late 2018, about the time Thompson was firing off the email, another of the government’s top pro-vaccine medical experts signed a sworn statement also alleging a government coverup of links between vaccines and autism.

Dr. Andrew Zimmerman, the world-renowned, pro-vaccine pediatric neurologist specializing in autism says that, as an expert witness for the government defending vaccines in vaccine court in 2007, he told the government that vaccines can cause autism in “exceptional” cases, after all. But he says the government covered up his finding, fired him as an expert witness, and misrepresented his opinion in court. The Department of Justice also secretly settled a major vaccine-autism court case that Zimmerman had consulted on– the government admitting liability but making sure the records were sealed– while telling other parents of vaccine-injured children that links to autism were debunked conspiracy theories. 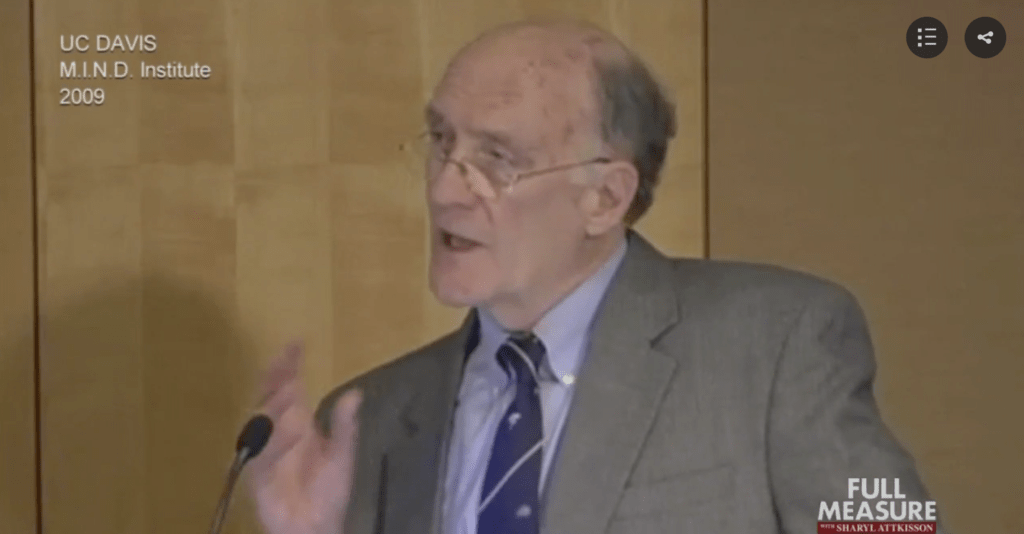 Dr. Andrew Zimmerman, the pro-vaccine govt. expert who says vaccines can cause autism, after all, in “exceptional” cases

Explosive allegations; but no independent investigation

Thompson has remained at CDC since he revealed the agency’s alleged scientific fraud. Although Thompson provided his information, documents, and a sworn statement to Congressman Bill Posey (R-Florida), Posey says he was unable to convince colleagues to investigate or schedule hearings on the bombshell allegations.

Once Thompson’s claims began to gain traction, numerous propagandists acting in the interest of the vaccine industry got busy controversializing Thompson and those reporting on his allegations, to try to discredit them.

While it may be unprecedented for the author of a scientific, peer-reviewed article to publicly expose alleged flaws in his own work and that of his colleagues, the journal that published the study apparently disregarded Thompson’s statements, and decided not to retract the study in question.

“As a publisher we take very seriously any questions about articles in our journal and have a set procedure to investigate such issues. We have followed that process, discussed the research methods with the authors, and have determined to take no action regarding the article,” a spokesman for Pediatrics told me in 2014 when I asked if the study would be retracted.