The Fed’s destructive money-pumping has many victims, but chief among these is the Wall Street financial narrative itself.

It emits not a whiff about the patent absurdity of the Fed’s monthly purchase of $120 billion of treasury and GSE debt under current circumstances; and treats with complete respect and seriousness the juvenile word game known as “thinking about thinking about tapering” by which the clowns in the Eccles Building fearfully attempt to placate the liquidity-intoxicated speculators on Wall Street.

So it’s not surprising that today’s 5.0% CPI reading was made inoperative within minutes after the BLS release by a chorus of financial pundits gumming about “base effects” and ridiculing outliers like soaring used car prices (up 29.7% YoY), which, of course, Bloomberg reporters never see the inside of anyway.

Then again, that’s why we look at the two-year stacked CAGRs, which smooth the ups and downs of the worst lockdown months last spring; and also why we use the 16% trimmed mean CPI, which eliminates the highest 8% and lowest 8% of items in the overall CPI each month (both sets of deleted outliers are different each month).

In the present instance, therefore, off-setting the used car prices in the highest 8% of items during May is the -5.0% YoY drop in health insurance costs (if you believe that BLS whopper) and the -5.3% drop in sporting event prices, which, of course, have been largely zero since last April.

In any event, the 16% trimmed mean CPI for May was up by 4.7% annualized versus the April number and was higher by 2.62% on YoY basis.

Still, the more salient point is that on a two-year stacked basis the plain old CPI – used car prices and all – leaves not a scintilla of doubt: Consumer inflation is accelerating and rapidly.

During the last eight months the growth rate for the two year stack has risen from 1.48% to 2.55% per annum. And we don’t recall a word in May 2019 about that year’s reading being particularly deflationary. It was actually up 1.83% from May 2018.

Still, according to the Fed apologists there’s nothing troubling about the above because the Fed is now only trying to hit its 2.00% inflation target “averaged over time”.

Let’s see. Here are the CPI growth rates going back to May 2014. It turns out you have to average back seven years before you have a shortfall from the 2.00% target!

CPI Increase per Annum To May 2021 From:

You get the scam. These mendacious fools will just keep averaging back in time until the get a number that’s a tad under 2.00%, smack their lips loudly and then pronounce the current inflation to be “transitory”.

And they will also toss out any inflation index that undercuts their MOAAR inflation mantra – like all of the data reported above!

So we will say it again: The CPI is a highly imperfect general price measure owing to its one-sided treatment of quality (hedonic) improvements, wherein some reported prices are adjusted downward for improved product features like airbags and more powerful PCs, put few prices are adjusted upward for the junkie toys, towels, kitchenware, appliances and furniture that comes out of China.

But with the 8% highest and 8% lowest prices dropped out monthly to filter out the short-run noise, the 16% trimmed mean version of the CPI at least purports to be a fixed basket price index, not a variable weight deflator like the Fed’s beloved PCE deflator.

In short, the 16% trimmed mean CPI puts paid to the “transitory” scam. Come hell or high water, this serviceable inflation measure has been rising at 2.00% per annum since the year 2000, and even more than that during the 1990s.

Equally significantly, there have been only a handful of times during the 256 monthly readings since January 2000 when the year-over-year measure dropped materially below 2.00%. 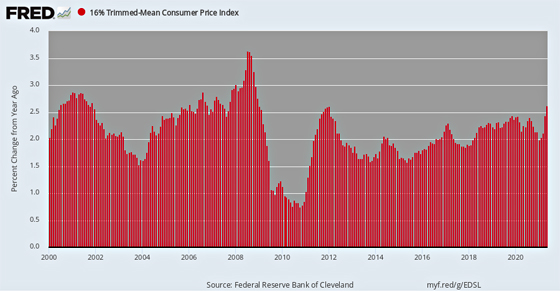 For want of doubt, here is the Fed’s preferred short-ruler – the core PCE (personal consumption expenditure deflator less food and energy). And the Fed’s case for its insane money-pumping essentially boils down to the dueling information covered by the red bars above and the purple bars below.

As it happens, the one-year change in the core PCE deflator is 3.1% and the stacked two-year gain is 1.99% per annum. That latter is apparently not close enough to 2.00% for government work, meaning that the Fed needs to get more years into its average.