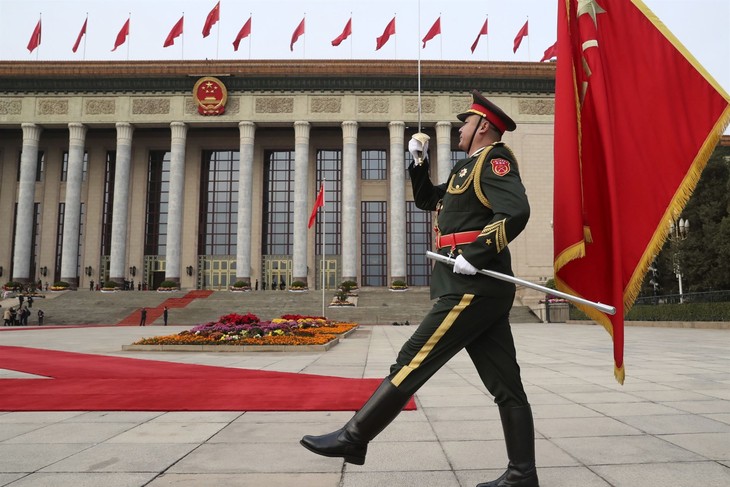 We now know the name of the Chinese defector who has been working with the Defense Intelligence Agency (DIA) for a few months and what his position within the Chinese military and government was, among other details.

Matthew Brazil and Jeff Stein at Spy Talk reported on the “rumor,” and gave the name and background of the rumored defector:

Chinese-language anti-communist media and Twitter are abuzz this week with rumors that a vice minister of State Security, Dong Jingwei (董经纬) defected in mid-February, flying from Hong Kong to the United States with his daughter, Dong Yang.

Dong is, or was, a longtime official in China’s Ministry of State Security (MSS), also known as the Guoanbu. His publicly available background indicates that he was responsible for the Ministry’s counterintelligence efforts in China, i.e., spy-catching, since being promoted to vice minister in April 2018. If the stories are true, Dong would be the highest-level defector in the history of the People’s Republic of China.

RedState’s sources confirmed that the defector is, in fact, Dong, that he was in charge of counterintelligence efforts in China, and that he flew to the United States in mid-February, allegedly to visit his daughter at a university in California. When Dong landed in California he contacted DIA officials and told them about his plans to defect and the information he’d brought with him. Dong then “hid in plain sight” for about two weeks before disappearing into DIA custody.

According to Spy Talk, Dong’s name came up during the Sino-American Summit held in Alaska in March 2021:

RedState’s sources say that Chinese officials did demand that the United States return Dong, but Blinken didn’t exactly refuse; at that time Blinken wasn’t aware that Dong was with the US government, the sources say, and told China that the US didn’t have Dong.

It’s only in the last three to four weeks that anyone outside DIA knew about the defector, according to RedState’s sources. Prior to that time, DIA was vetting the information provided and confronting Langley officials with what they’d learned without divulging the source.

Experts quoted in the Spy Talk piece essentially say that the defection is just a rumor and that rumors happen all the time, but that if it’s true it’s a big deal but “not game-changing.” Based on conversations with sources familiar with the information Dong has already provided and its quantity and reliability, that’s simply not the case. Not only does Dong have detailed information about China’s special weapons systems, the Chinese military’s operation of the Wuhan Institute of Virology and the origins of SARS-CoV-2, and the Chinese government’s assets and sources within the United States; Dong has extremely embarrassing and damaging information about our intelligence community and government officials in the “terabytes of data” he’s provided to the DIA.

Some of the information provided by Dong was reported on by the Washington Free Beacon earlier this week:

The episode is recounted in an internal report that circulated among various national security and law enforcement agencies on June 3. That report surmises that the Chinese students returned to the United States earlier than expected in order to avoid future travel restrictions caused by the COVID-19 pandemic.

“The team examined 58,000 inbound Chinese F/J visa holders in the [Passenger Name Record] database and identified 396 individuals whose return travel was [scheduled] after January 2020 but had returned in January 2020,” the report reads.

The Free Beacon reports that U.S. intelligence officials haven’t come to a conclusion about whether or not the students being investigated were spies, but RedState is told that whether or not one wants to use the term “spy,” those students were sent back to the United States with specific information-gathering directives with the purpose of helping Beijing understand the US government’s response to the pandemic at a much deeper level than they could through publicly-available documents. Those students (spies) were charged with reporting back on public policy changes, economic response and damage, impacts on the healthcare system (equipment/hospital bed shortages, etc), supply chain impacts (including how long it took things like semiconductors from China to reach the United States), civil unrest, and more.

In addition, Dong has provided DIA with the following information:

Dong also has provided DIA with copies of the contents of the hard drive on Hunter Biden’s laptop, showing the information the Chinese government has about Hunter’s pornography problem and about his (and Joe’s) business dealings with Chinese entities. Some of the files on Dong has provided shine a light on just how it was that the sale of Henniges Automotive (and their stealth technology) to Chinese military manufacturer AVIC Auto was approved.