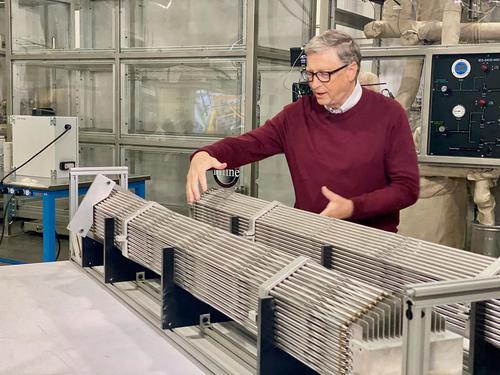 For the first half of the year, Zero Hedge has been especially constructive on the uranium sector (read: here, here, here), which we believe uranium companies will get a boost as ESG euphoria takes hold. In some of the first signs of a nuclear revival in the US after decades of neglect, billionaire Bill Gates’ advanced nuclear reactor company TerraPower LLC and Warren Buffett’s PacifiCorp have been chosen by Wyoming to build the first Natrium reactor project, according to Reuters.

Wyoming Governor Mark Gordon announced Wednesday that the state has partnered with TerraPower, Rocky Mountain Power, and PacifiCorp to build a Natrium reactor at a retiring coal plant within seven years.

The nuclear plant will replace one of PacifiCorp’s coal-fired plants, Gordon said. He said the ability to use nuclear power would allow the state to maintain its future goals of becoming carbon negative while using fossil fuels.

“I am not going to abandon any of our fossil fuel industries. It is absolutely essential to our state,” Gordon said.

Chris Levesque, president and CEO of TerraPower, said, “together with PacifiCorp, we’re creating the energy grid of the future where advanced nuclear technologies provide good-paying jobs and clean energy for years to come. The Natrium technology was designed to solve a challenge utilities face as they work to enhance grid reliability and stability while meeting decarbonization and emissions-reduction goals.”

“This project is an exciting economic opportunity for Wyoming. Siting a Natrium advanced reactor at a retiring Wyoming coal plant could ensure that a formerly productive coal generation site continues to produce reliable power for our customers,” said Gary Hoogeveen, president and CEO of Rocky Mountain Power, a division of PacifiCorp. “We are currently conducting joint due diligence to ensure this opportunity is cost-effective for our customers and a great fit for Wyoming and the communities we serve.”

The location of the Natrium demonstration plant is expected to be announced later this year.

The project features a 345-megawatt sodium-cooled fast reactor with molten salt-based energy storage to boost the system’s power output to 500-megawatt during peak demand hours. The plant is expected to cost $1 billion.

Uranium bulls have been increasingly convinced about the sector’s prospects, as prices have trended after roughly a decade in the dirt.

Will nuclear be the next “ESG Craze”? Hugh Hendry and Michael Burry (two iconic hedge fund managers) have both jumped on the atomic trend earlier this year, with Burry calling on the liberals to “convert the US to nuclear,” adding the hashtag #greenfuturenow.

Gates appears to be riding the ESG wave as his first big opportunity to plug Terrapower into the Wyoming power grid could happen by 2028 or before.