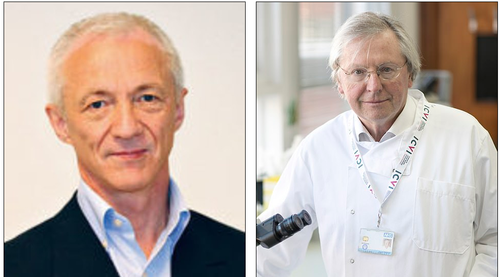 Two notable virologists claim to have found “unique fingerprints” on COVID-19 samples that only could have arisen from laboratory manipulation, according to an explosive 22-page paper obtained by the Daily Mail.

They also conclude that “SARS-Coronavirus-2 has “no credible natural ancestor” and that it is “beyond reasonable doubt” that the virus was created via “laboratory manipulation.”

Last year, Sørensen told Norwegian broadcaster NRK that COVID-19 has properties which have ‘never been detected in nature,’ and that the United States has ‘collaborated for many years on coronavirus research through “gain of function” studies with China.

The paper detailing their months-long “forensic analysis,” which looked back at experiments done at the Wuhan Institute of Virology between 2002 and 2019, is set to be published in the scientific journal Quarterly Review of Biophysics Discovery.

More via the Mail:

Digging through archives of journals and databases, Dalgleish and Sørensen pieced together how Chinese scientists, some working in concert with American universities, allegedly built the tools to create the coronavirus.

Much of the work was centered around controversial ‘Gain of Function‘ research – temporarily outlawed in the US under the Obama administration.

Gain of Function involves tweaking naturally occurring viruses to make them more infectious, so that they can replicate in human cells in a lab, allowing the virus’s potential effect on humans to be studied and better understood.

Dalgleish and Sørensen claim that scientists working on Gain of Function projects took a natural coronavirus ‘backbone’ found in Chinese cave bats and spliced onto it a new ‘spike’, turning it into the deadly and highly transmissible SARS-Cov-2.

One tell-tale sign of alleged manipulation the two men highlighted was a row of four amino acids they found on the SARS-Cov-2 spike.

In an exclusive interview with DailyMail.com, Sørensen said the amino acids all have a positive charge, which cause the virus to tightly cling to the negatively charged parts of human cells like a magnet, and so become more infectious.

But because, like magnets, the positively charged amino acids repel each other, it is rare to find even three in a row in naturally occurring organisms, while four in a row  is ‘extremely unlikely,’ the scientist said.

‘The laws of physics mean that you cannot have four positively charged amino acids in a row. The only way you can get this is if you artificially manufacture it,’ Dalgleish told DailyMail.com.

Their new paper says these features of SARS-Cov-2 are ‘unique fingerprints’ which are ‘indicative of purposive manipulation‘, and that ‘the likelihood of it being the result of natural processes is very small.’

‘A natural virus pandemic would be expected to mutate gradually and become more infectious but less pathogenic which is what many expected with the COVID-19 pandemic but which does not appear to have happened,’ the scientists wrote.

‘The implication of our historical reconstruction, we posit now beyond reasonable doubt, of the purposively manipulated chimeric virus SARS-CoV-2 makes it imperative to reconsider what types of Gain of Function experiments it is morally acceptable to undertake.

When Sørensen and Dalgleish floated their findings last year, it was ‘debunked’ with the thinnest of logic – however former MI6 chief Sir Richard Dearlove pointed to the pair’s findings as an “important” development which could prove that the pandemic may have originated at the WIV.