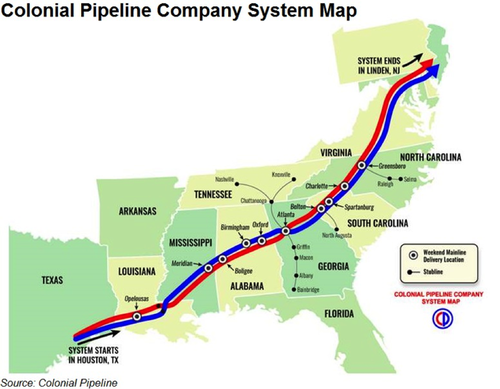 Update 9:00pm ET:  The US government declared a state of emergency late on Sunday, lifting limits on the transport of fuels by road in a bid to keep gas supply lines open as fears of shortages spiked after the continued shutdown of the Colonial Pipeline.

“This Declaration addresses the emergency conditions creating a need for immediate transportation of gasoline, diesel, jet fuel, and other refined petroleum products and provides necessary relief,” the Department of Transportation said. White House Press Sec Jen Psaki added that “as the Administration works to mitigate potential disruptions to supply as a result of the Colonial Pipeline incident, @USDOT is taking action today to allow flexibility for truckers in 17 states.”

As the Administration works to mitigate potential disruptions to supply as a result of the Colonial Pipeline incident, @USDOT is taking action today to allow flexibility for truckers in 17 states. https://t.co/mILRtlhjkP

The move lifted limits on the transport of fuels by road to ease the fallout from the continuing closure of the Colonial pipeline, which carries almost half the fuel consumed on the US East Coast, following a ransomware cyber attack on Friday.

The decision comes as the government scrambles to deal with the fallout from the closure of Colonial, the biggest refined products pipeline in the US, transporting 2.5m barrels of fuel a day from refineries on the Gulf Coast to markets such as Atlanta, Washington and New York (see more below).

If the pipeline is not quickly reopened the impact on prices could become more severe in the coming days, said Patrick De Haan, head of petroleum analysis at data provider GasBuddy. “We’re realizing the gravity of it is maybe worse than what we’d expected,” said De Haan. “There’s still a little breathing room, we’re starting to run low on it. But Monday, Tuesday if there’s no news, you know we’re dealing with something fairly significant.”

Just in case the US didn’t already have a “transitory hyperinflation” problem, gasoline futures soared more than 4% – and are likely to jump much more – late on Sunday after the Colonial Pipeline announced that while some smaller lateral lines between terminals and delivery points are now operational, its mainlines (Lines 1, 2, 3 and 4) remain offline since late Friday after the company suffered a crippling cyberattack that affected its key IT systems.

Colonial operates Line 1 for gasoline and Line 2 for diesel and jet fuel from Pasadena, Texas, some 15 miles from the nation’s largest refineries, to Greensboro, North Carolina, at a combined 2.5 million barrels a day. They merge at Greensboro to feed a line carrying about 900,000 barrels a day into New York Harbor, and other East Coast pipelines.

Colonial said that it is “in the process of restoring service to other laterals and will bring our full system back online only when we believe it is safe to do so, and in full compliance with the approval of all federal regulations.” Full statement below:

On May 7, Colonial Pipeline Company learned it was the victim of a cybersecurity attack and has since determined that the incident involved ransomware. Quickly after learning of the attack, Colonial proactively took certain systems offline to contain the threat. These actions temporarily halted all pipeline operations and affected some of our IT systems, which we are actively in the process of restoring.

Leading, third-party cybersecurity experts were also immediately engaged after discovering the issue and launched an investigation into the nature and scope of this incident. We have remained in contact with law enforcement and other federal agencies, including the Department of Energy who is leading the Federal Government response.

Maintaining the operational security of our pipeline, in addition to safely bringing our systems back online, remain our highest priorities. Over the past 48 hours, Colonial Pipeline personnel have taken additional precautionary measures to help further monitor and protect the safety and security of its pipeline.

The Colonial Pipeline operations team is developing a system restart plan. While our mainlines (Lines 1, 2, 3 and 4) remain offline, some smaller lateral lines between terminals and delivery points are now operational. We are in the process of restoring service to other laterals and will bring our full system back online only when we believe it is safe to do so, and in full compliance with the approval of all federal regulations.

At this time, our primary focus continues to be the safe and efficient restoration of service to our pipeline system, while minimizing disruption to our customers and all those who rely on Colonial Pipeline. We appreciate the patience and outpouring of support we have received from others throughout the industry.

Meanwhile, downstream customers, which includes pretty much the entire Eastern seaboard, are starting to freak out as they face a new week without the primary source of gasoline supply for hundreds of millions of customers.

In response to the news, gasoline futures jumped 4% to $2.21 a gallon, approaching the highest since 2014. WTI and Brent both spiked more than 1%, while other products such as diesel and jet fuel are also likely to jump.