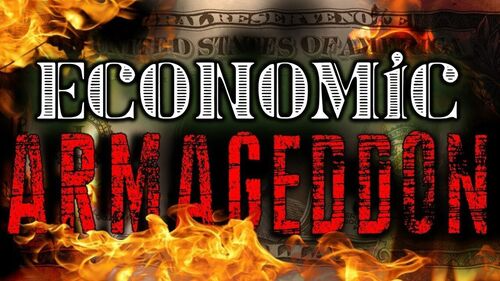 I am yelling fire because fire is raging. Mixing metaphors, the storm is not coming; it’s already here. America’s financial house of cards will fall, taking other nations with her. Thoughtful Conservatives must inform people of imminent danger because families will be disrupted, businesses will fail, couples will be divorced, and children will suffer immeasurably.

The economy has faltered, is failing, and will fall.

I see no way out of the coming collapse. Sometimes politicians make such a mess of things that there is no way to correct or solve the mess. It’s almost like being in a small boat on a raging sea, unsure how far you are from the coast you left and the distance to where you hope to dock. You keep going hoping to stay afloat; however, our “boat” is overwhelmed with accelerating debt.

I no longer feel alone or like the boy who cried “wolf.” Since my earlier predictions of the end of the boom followed by gloom and doom, everything is screaming support for that position. It is my opinion the coming collapse will be worse than I thought!

As I’ve proved for decades while traveling throughout Europe, the Middle East, Asia, Australia, and Africa, the dollar is the world’s currency. I seldom change dollars into the currency of the nation I’m visiting, and I’ve never had dollars refused. However, the dollar is worth less and will soon be worthless!

A prominent Russian official prophesied that the U.S. will experience a moral and economic breakdown resulting in civil war and break into six distinct parts. In recent months, there has been much discussion of some parts of the U.S. withdrawing from the Union! It seems commentators and television hosts are making predictions more ominous than mine!

(ANP NEEDS YOUR HELP: Donations and ad revenue are all that keep ANP online, so please consider donating to ANP to help keep us in this fight for America’s future at this critical time in US history. With ‘slow-Joe’ Biden occupying the White House, and at a time of systematic, ‘big tech’censorship and widespread Democrat corruption, truthful media and alternative views are crucial.) 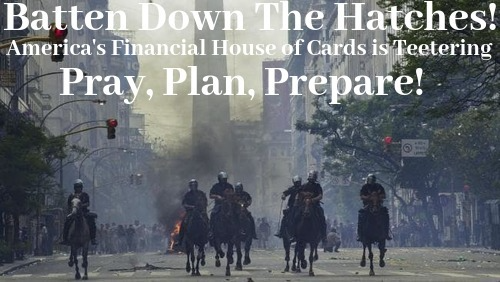 Russia, China, and Iran are not disappointed or distressed with our financial woes but are delighted. However, the murderous, malevolent masters in Moscow, Beijing, and Tehran don’t seem to understand that as goes America, so goes the world.

Taking a slap at the dollar in 2019, China and Russia agreed to use their currencies instead of dollars for reciprocal trading. This action of the two major Communist nations reduced the dollar’s use from 90 percent in 2015 to only 46 percent in 2020. Our “friends” in the European Union are delighted with that decision to ditch the dollar.

Many nations have lost confidence in the dollar and joined the “ditch the dollar” club, including China, Russia, the UK, India, Turkey, Iran, Venezuela, France, Germany, Japan, Brazil, Pakistan, Kyrgyzstan, Tajikistan, Kazakhstan, Uzbekistan, and others. Russia (the world’s largest natural gas producer and third in oil) has decided to sell its natural resources in rubles instead of U.S. dollars, although half its total trade with the U.S. is in dollars.

In 2019, the South China Morning Post reported that Beijing and Moscow intend to “ditch the U.S. dollar and switch to local currencies in international trade,” trying to cut their dependence on U.S. currency.

I think all this is headed toward a worldwide currency à la the world court, world church, and world government with a world military. With that in mind, it might be wise to join the “ditch the dollar” club for something more reliable such as precious metals. Russia’s flight from the dollar “has pushed the share of gold in Russia’s $583 billion international reserves above dollars for the first time on record.”

I believe in a few months, we will be where the Egyptians were in Genesis 47:15 when “the money failed.” During those days in Egypt, the main concern was food. That is what I have been saying for years. Your concern will not be vacations, television, sports, hobbies, or even your job but “how will I feed my family today.”

When the dollar has totally collapsed, you will understand why informed people have always purchased gold and silver for survival during turbulent times. After the currency fails, anything of value will be held rather than unwanted, unusable, and unsupported dollars, marks, pesos, rubles, etc.

Between WW I and WW II in Germany, the people lost confidence in the German mark and ran from it as if their hair was on fire. By November of 1923, it took 4,210,500,000,000 German marks to equal one U.S. dollar! Germans literally burned paper marks to heat their homes since that was cheaper than buying coal.

By then, the Germans rushed away from the mark toward “things.” That is things that could be felt, seen, used, sold, or traded if necessary.

I think that barter will become the norm for Americans in the next couple of years, if not sooner.

Furthermore, I think the Dow will plummet below 5,000, but that opinion is not based on economics or some financial formula. It is a general conviction based on numerous criteria. My opinions are philosophically and theologically based.

It is impossible to justify the reckless spending of trillions of dollars. Few are asking about whether or not massive expenditures are constitutional. I don’t know one politician who is concerned about the massive giveaway being justified by COVID.

No health issue or any other issue has priority over the U.S. Constitution.

The giving of thousands of dollars to families (many not in financial need) would have been rejected, even ridiculed, a few decades ago. Public money is being used to cover private losses without any constitutional support. Furthermore, massive corporations considered too big to fail are being bailed out by taxpayers to protect shareholders who morally and legally should take the risk. The shareholders bought into companies hoping for huge profits and are now being protected against massive losses. Something seems to be askew here for a free enterprise republic. But that is very normal for a Socialist nation.

Marx, Lenin, Stalin, Mao, Castro, and all Socialists of the world would stand up and cheer Biden and what’s-her-name Harris for implementing their far-left agenda.