Bill Gates’ relationship with Jeffrey Epstein was cited as a cause of divorce with Melinda. What exactly happened during Gates’ meetings with the disgraced billionaire?

After spending the last 14 months appearing on TV as a couple to tell humanity what it should be doing, Bill and Melinda Gates are getting divorced. According to sources, divorce talks began in 2019 and the marriage was described as “irretrievably broken”. One of the reasons cited: Melinda did not approve of Bill’s friendship with Jeffrey Epstein.

One source of concern for Ms. Gates was her husband’s dealings with convicted sex offender Jeffrey Epstein, according to the people and a former employee of their charity, the Bill & Melinda Gates Foundation. Ms. Gates’s concerns about the relationship dated as far back as 2013, the former employee said. (…)

Ms. Gates, a global advocate for women and girls, had told her husband she was uncomfortable with Mr. Epstein after the couple met him together in 2013, the former employee of the Gates Foundation said. Mr. Gates and some employees of the Gates Foundation continued a relationship with Mr. Epstein despite her concerns, this person said.
– Wall Street Journal, Melinda Gates Was Meeting With Divorce Lawyers Since 2019 to End Marriage With Bill Gates

A troubling fact about this friendship between billionaires is that it started AFTER Epstein was convicted for soliciting a minor and after he registered as a sex offender. In other words, Gates knew exactly what Epstein was about, and he was OK with it. Not only that, he became close to him.

In October 2019, the New York Times reported that Bill Gates met with Epstein several times and even stayed late at his New York townhouse.

In fact, beginning in 2011, Mr. Gates met with Mr. Epstein on numerous occasions — including at least three times at Mr. Epstein’s palatial Manhattan townhouse, and at least once staying late into the night, according to interviews with more than a dozen people familiar with the relationship, as well as documents reviewed by The New York Times.

Employees of Mr. Gates’s foundation also paid multiple visits to Mr. Epstein’s mansion. And Mr. Epstein spoke with the Bill and Melinda Gates Foundation and JPMorgan Chase about a proposed multibillion-dollar charitable fund — an arrangement that had the potential to generate enormous fees for Mr. Epstein.
– Ibid. 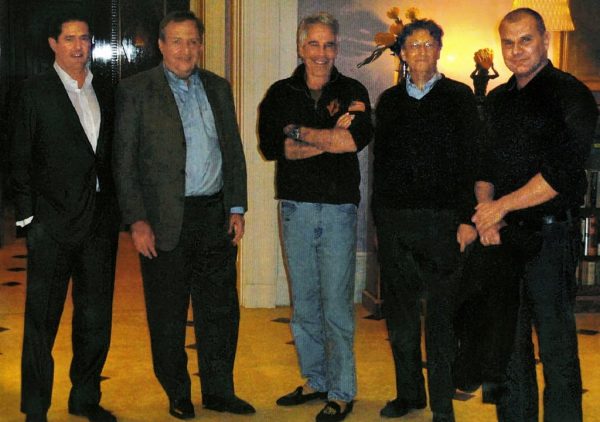 Here’s an account of the first meeting between Gates and Epstein.

Mr. Epstein and Mr. Gates first met face to face on the evening of Jan. 31, 2011, at Mr. Epstein’s townhouse on the Upper East Side. They were joined by Dr. Eva Andersson-Dubin, a former Miss Sweden whom Mr. Epstein had once dated, and her 15-year-old daughter. (Dr. Andersson-Dubin’s husband, the hedge fund billionaire Glenn Dubin, was a friend and business associate of Mr. Epstein’s. The Dubins declined to comment.)

The gathering started at 8 and lasted several hours, according to Ms. Arnold, Mr. Gates’s spokeswoman. Mr. Epstein subsequently boasted about the meeting in emails to friends and associates. “Bill’s great,” he wrote in one, reviewed by The Times.

Mr. Gates, in turn, praised Mr. Epstein’s charm and intelligence. Emailing colleagues the next day, he said: “A very attractive Swedish woman and her daughter dropped by and I ended up staying there quite late.”
– New York Times, Bill Gates Met With Jeffrey Epstein Many Times, Despite His Past

Why was a 15-year-old girl staying late at the house of a guy who was convicted for soliciting a minor? What happened that night?

In one e-mail sent to a colleague, Gates commented on Epstein’s lifestyle, calling it “intriguing”.